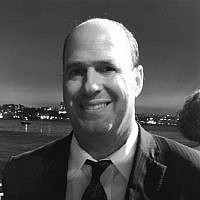 The Blogs
Farley Weiss
Apply for a Blog
Advertisement
Please note that the posts on The Blogs are contributed by third parties. The opinions, facts and any media content in them are presented solely by the authors, and neither The Times of Israel nor its partners assume any responsibility for them. Please contact us in case of abuse. In case of abuse,
Report this post.

Shortly after being elected to the Senate for the first time, Senator Joe Lieberman told a fascinating story about his victory over Senator Lowell Weicker. Lieberman related that a prominent politician in Connecticut called him up a week before the election and told him he would win. Lieberman responded that is great to hear but why do you say so. The politician, who was not Jewish, responded that when his wife had three friends over to play cards, he asked them who they were voting for and they all responded Lieberman. He then asked them why and they responded because he is religious. The politician told Lieberman that I thought your being religious was going to hurt you in this election and now I think it will help you. The politician was right and Lieberman won and was reelected twice thereafter and served 18 years in the Senate.

This story in many ways shows an amazing change that has happened in America. There was a very sad time when many American Jews either gave up being Shomer Shabbat to keep their jobs or could not take jobs because they were Shomer Shabbat. A New England Mill in 1908 became the first American company to start a five-day work week to accommodate its Jewish workers who used to work Sunday because they would not work on the Sabbath. Their working on Sunday upset the non-Jewish workers who did not want anyone to work on Sunday and eventually a five day work week became the norm in America.

It is interesting to note that the National Council of Young Israel formed around this time as its leaders had their rabbis speak in English rather than Yiddish on Shabbat morning and did outreach in order to keep the young Jews observant. Over time, the efforts of its founders proved to be prescient as today Orthodox Judaism is flourishing and growing in America. With the higher birthrate of the Orthodox Jews, the Orthodox are increasing their percentage of the total number of all Jews in America.

It is interesting that Orthodox Jews are now in more prominent positions in America then they have ever before reached and their religious needs are being respected as well. Senator Joe Lieberman was picked by Al Gore to be Vice President despite all of the Jewish holidays occurring during the critical two months before the election. Jack Lew is Sabbath-observant and he became Chief of Staff to President Obama during his presidency. He is presently the Secretary of Treasury and he has commented on how the president would let him know it is getting late on Friday and he needs to get home for the Sabbath.

It is well known that Donald Trump’s Chief Legal Officer is Jason Greenblatt, who is Orthodox. Jason has publicly told the story about how he was working through the night on a major deal and it was not getting done before a two-day Jewish holiday followed by the Sabbath. Instead of pressuring him, Donald Trump responded to go spend the three days with his family and the deal can wait.

Two weeks ago, I went to hear Ivanka Trump speak publicly in depth for the first time about her Orthodox conversion to Judaism. She spoke at length of her father’s acceptance of her decision and his understanding that it was a well thought-out decision for which she spent well over a year studying Judaism before converting. Ivanka provided many positive comments of the benefits of Sabbath observance and disconnecting from the world and spending time with her kids for 25 hours once a week. She remarked about her enjoyment playing board games with her little kids and the pleasures of the Sabbath meals with her family.

It is well known that Ivanka is involved in many of the most important business deals of the Trump organization and that her Orthodox husband, Jared Kushner, has a very close relationship with Donald Trump and was the only person with Trump when he met Prime Minister Netanyahu in New York this past September. Ivanka, if she was not already, will become the most famous Sabbath observer in the world and likely the best spokesperson for Sabbath observance.

Even the non-Jewish famous singer Katy Perry wishes there was a worldwide Shabbat. In a May interview with Cosmopolitan she said “I wish there was a thing like Shabbat that wasn’t particularly religious-based, that was kind of a worldwide day where we’re not on our phones — like a movement. I just think something like this would be really great for our minds, especially because kids today — if they weren’t born in the 80s — don’t even know what a life without internet is like. And I think it’s going to be really difficult for our focus and our attention spans moving forward. So I’d love if the world implemented an actual day of real rest.”

It appears whether it is working in the White House or in the highest levels of companies run by non-Jews that Sabbath observance has become respected and accepted in America in a way that it never previously has been. Senator Lieberman wrote a book in 2011 emphasizing the benefits of Sabbath observance entitled “The Gift of Rest: Rediscovering the Beauty of the Sabbath.”

In this era of technology where the workday never really ends it is hard for us Sabbath observers to understand how people can recuperate without the extraordinary break and time to spend with your family and friends that the Sabbath presents. No longer does Sabbath observance prevent you from reaching the highest levels of society and the benefits are enormous as no one expects you to respond to an email if you keep the Sabbath. It is time for more Jews to enjoy the tremendous benefits of Sabbath observance.