Amidst the Covid-19 crisis in America and the race to produce a vaccine, the Trump administration is shining a spotlight on an army germ lab as the forerunner for this mission.

After being shut down last year for safety lapse, the U.S. Army Institute of Infectious Diseases (USAMRIID) at Fort Detrick—which has BSL-3 and BSL-4 labs to handle deadly pathogens—has been reopened and is gearing up to fight the virus.

However, according to a March 21 article published by the Manhattan Institute for Policy Research entitled “A Biosecurity Failure”, the pomp and circumstance may be premature, given the lab’s history of safety lapse and mismanagement.

Franz and Miller note how the institute has for many years battled financial mismanagement, safety lapse, failure to adjust to a post-Cold War mission, leadership challenges, and just before the Covid-19 outbreak, an atmosphere of “fear and mistrust.”

The lab’s status and morale especially plummeted after the FBI accused one of its scientist of committing the anthrax bioterror attack in 2001, by placing the deadly agent in the mail, which killed five, infected 17, and put 20,000 Americans on antibiotics.

As such, in view of the virus crisis and CDC’s hurried reopening of Fort Detrick labs on March 27, the federal government would need to reassure Americans about biosecurity of the lab and public health risks in the short term, as well as long-term risks associated with the proliferation of high-containment bio labs given a renewed focus on U.S. biodefense policy.

As revealed by past investigations, Fort Detrick has not had a good record for compliance of safety procedures.

In 1992, Maryland officials investigated Fort Detrick for hazardous waste disposal violations by exploding chemicals with grenades, and in 1995, contractors found a leak in a sewer line just 100 feet from a steam sterilization plant, where waste water of deadly pathogens from 50 laboratories on the base is treated.

Sloppy safety habits caused anthrax leaks from the labs in 2002, where it was described as a dirty “rat’s nest” and personnel regularly failed to monitor or decontaminate “hot labs” where work was done on anthrax.  In 2003, while cleaning up a leaking Detrick chemical dump, employees found 100-plus undocumented vials of buried live bacteria, and again in 2009, when 9,200-plus vials (one-eighth of its stock) were discovered to be undocumented in the inventory.

Operations in BSL-3 and BSL-4 labs were suspended in 2018 due to flooding and leaks in storage tanks of hazardous waste, and most recently in 2019, the germ lab was shut down due to several “serious” protocol violations.

Diana Digangi from ABC7 WJLA obtained a list of the violations from CDC, which included an individual without required respiratory protection entering a room multiple times where researchers were infecting animals with toxins and select agents, risking pathogen exposure, and another incident of a laboratorian disposing hazardous waste without gloves on. CDC list of select agents and toxins include anthrax, ebola, botulism, hemorrhagic fever, smallpox and plague.

Safety lapse also occur in other military labs. In 2015, the Pentagon discovered that one of its laboratories in Dugway Proving Ground, Utah, had inadvertently sent live Bacillus anthracis, the bacterium that causes anthrax, to almost 200 laboratories worldwide over the course of 12 years, because the lab’s “inactivation” (removal of hazardous effects) of the pathogen was found to be incomplete. 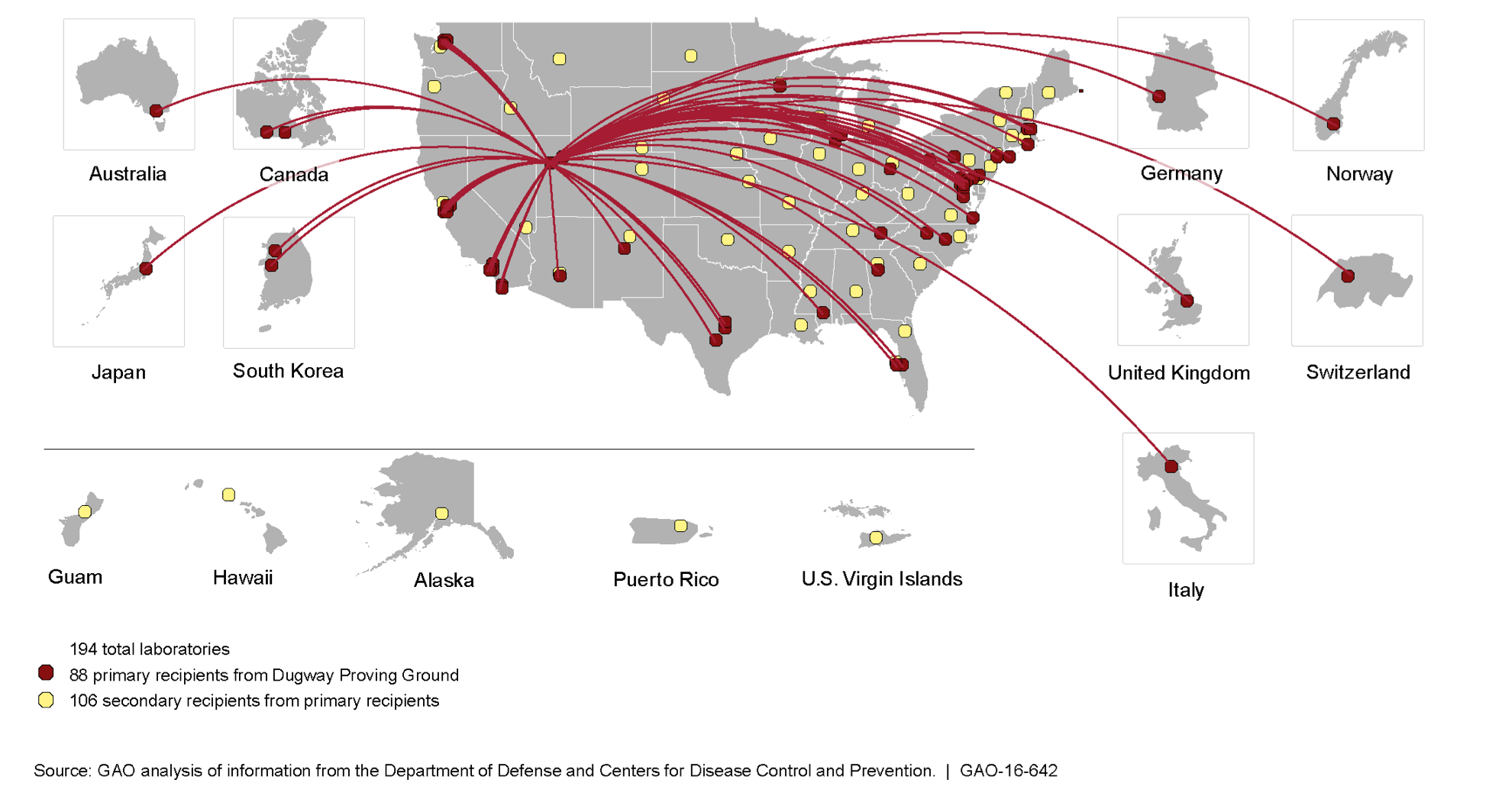 Caption: Sites around the world that received live anthrax samples form 2004 through 2015

In light of these safety violations in U.S. germ labs, the proliferation of BSL-3 and BSL-4 labs becomes a public health concern that would also need to be addressed.

Before 1990, there were only two BSL-4 labs in the U.S., one at CDC in Atlanta, and the other at USAMRIID in Fort Detrick, Maryland.  After 9/11, the U.S. opened ten more, and in a 2007 report by GAO’s chief technologist Keith Rhodes, he observed “a major proliferation of high-containment BSL-3 and BSL-4 labs is taking place in the United States”, with the country’s 1,300 plus “high containment” germ labs essentially policing themselves.

This is disconcerting for Americans who live in states which host these labs.  As biosecurity experts Filippa Lentzos from Kings College London and Gregory Koblentz from George Mason University argued, the proliferation of labs and scientists working on dangerous pathogens is adding to our collective risk.  These include accidental releases, worker infections, theft, and insider threats.

Moreover, they suggested foreign governments might interpret massive expansion of American research as a cover for an offensive bioweapons program, sparking a biodefense arms race.

Scanning the horizon, these are some outstanding issues that the U.S. government as well as other countries would need to consider, even as they race to find a vaccine for Covid-19.