Saints reach much wider than their community or their religion. It is as if the halo of certain individuals casts a wide ring of life that speaks to some fundamental dimension of being human, a dimension that transcends the boundaries of their particular religion. Great saints do not belong to a religion; they are a patrimony of all humanity.

This is certainly the case in a global age, where media helps deliver the image of the holy individual far and wide. Certain personalities have the power to offset so much of the negative image of religion, also spread by the media, by showing us the best of religion, and inspiring members of their own faith, of other faiths and of no faith.

Such a figure was Mother Theresa of Calcutta, who was declared a Saint by Pope Francis yesterday. Nobel prize laureate, winner of the Templeton prize and one of the modern icons of religion – she strikes a chord of empathy, respect and admiration in the hearts of many, regardless of their religious affiliation.

What can a Jewish observer draw from the testimony of Mother Theresa and what lessons can we learn from her life and from how she engaged in her life’s work? Three points come to mind.

The Power of Service

We all have in us an implicit expectation that people of religion should somehow be better than others, or show the power of their faith in a way that manifests something beyond human decency and ordinary goodness. We are often disappointed when individuals in religion fail to live up to that expectation, let alone provide a counter-testimony, hillul ha-Shem in Jewish terminology. So, when someone performs extraordinary service in the name of religion, this restores something of our faith in the power of faith. 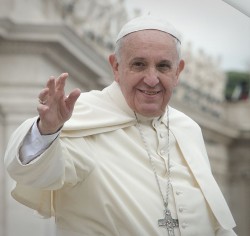 Pope Francis during the canonization (Wikipedia)

Mother Theresa’s service to the poor and downtrodden speaks to the most basic dimension of our common humanity. No nation has monopoly over poverty and no community is exempt from suffering. Caring for the poor and downtrodden strikes a note of appreciation because we all realize we must engage in it, and yet somehow fall short of doing so adequately. The power of example is one of the Saint’s fundamental dimensions. What Mother Theresa did is recognized by one and all and constitutes an invitation to one and all to service of the needy. Something of the reality of God is communicated through caring and loving service in ways that are more direct than the tomes composed by learned theologians, halachists and philosophers. God’s very goodness communicates through such service, and is recognized far and wide, beyond specific religious boundaries.

Caring for the Person, Regardless of Religious Identity

It is not only that certain great individuals can be recognized beyond their tradition. Even more fundamentally, their greatness finds expression in transcending the “us-them” dichotomy of believers, and in treating insiders and outsiders with the same gaze of goodness and service. Mother Theresa did not serve Christians. She served humans.

Earlier this year I visited the first home she founded in Calcutta. It is located within the broader complex of a major Hindu Temple, Kalighat. There she provided shelter and care to people who were on the streets, regardless of their faith. I spent a morning volunteering with her sisters and volunteers, getting a glimpse of the reality of their lives and the depth, and simplicity, of their dedication and commitment. People from all over the world flock to help in her homes. Many of them are not even religious. Goodness communicates beyond religion. Some of the volunteers may be touched by religion; many will be drawn to goodness as such, irrespective of the particularity of faith. God and good are one.

The same holds true for the inmates. I had a long talk with the priest who serves in the home. I wanted to get a better sense of his motivation. Was his service a means of winning souls? Was it all a missionary tactic, or was service an ideal in and of itself, a way of being Christian without the age-old practice of seeking to convert others by means such as kindness? I felt good about Fr. Julian’s reply. It was clear to me from his response that charity and care for the poor were not simply a missionary tactic. The service was true and selfless, without expectation of changing people’s religious identity. Stories of respect and affirmation of the religious identity of others in Mother Theresa’s practice abound. Needless to say, this increases respect across religions. 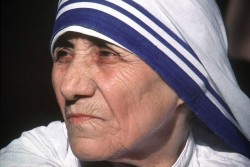 There is a third lesson from Mother Theresa’s life, beyond the power of service, and the testimony of service beyond faith boundaries. It is one that is particularly relevant to the Jewish observer. (I owe the inspiration and understanding for what follows to Father Raniero Cantalamessa, known as the Pope’s preacher, for the homilies he has been offering for decades to the past three Popes). About 15 years ago, when Mother Theresa became “Blessed”, the step before becoming “Saint”, in the formal processes of the Catholic Church, some of her letters to her confessor were published. In them, one learns of her feelings of darkness, loss of faith, loss of contact and love of God. If one typically considers the saint, the outstanding religious individual, to be operating from his or her love and life in God, here is the opposite internal reality. After an initial closeness, even mystical experience, that led Saint Theresa to leave her former community of Loretto, where she was a teacher, and to serve the poor, Mother Theresa spent the greater part of her life in spiritual darkness, feeling God far from her.

This reality gives us much pause for thought. If for some it cast doubt on her saintliness, for others it was a sign of even greater sanctity. All her good deeds were carried out despite continual suffering and a darkness, sometimes described as a dark night of the soul or spirit. What power would be required to continue serving, and doing so in the name of God, despite such darkness? Why such darkness?

Father Cantalamessa offers two powerful suggestions, beyond the classical Christian understanding of the purificatory role of such suffering. The first has to do with her superstar status, amplified by the media. How could a person withstand the power of continuing admiration without developing ego? Cantalamessa suggests “The interminable night of some modern saints is the means of protection invented by God for today’s saints who live and work constantly under the spotlight of the media.”

There is a still more profound cause, he opines. The post-modern world has produced “atheists in good faith: those who live painfully the situation of the silence of God, who do not believe in God but do not boast about it”. I believe we can take the point one step further, drawing on the Jewish experience and then re-read that experience in light of the testimony of Saint Mother Theresa. The dark night of the soul is not only the dark night of an individual mystic. It is a condition of the modern age. For many people God has absented himself from the world, leaving it in darkness. The holocaust is the epitome of this experience of divine hiding, but not its unique expression. The opposite pole of the life of joyous intimacy with God, the heritage of the mystics, is the sense of God’s exile, hiddenness and absence. So many Jews are unable to find God in and since the holocaust, and more broadly in modern reality. Absence of the conscious presence of God is for many Jews a foundational reality, to which they must respond. Mother Theresa offers one particularly noteworthy response. Her response was not to abandon a God whom she felt abandoned by. Rather, it was to increase her attachment to him through service of others.  It is as if finding God concealed in the “Good” is the response to God’s own concealment.

The response to distance, darkness and abandonment is, then, not to walk away from God. It is to learn how to be with Him in darkness and how to turn one’s life into a light for others, even when one does not feel illuminated by the light of the Source. In a Jewish world highly polarized by the division between religious and non-religious, by competing readings of history and by the gnawing sense of God’s absence and the multiple responses it can generate, Mother Theresa’s universal sainthood offers a message that speaks across religions. In the same way her care and service are offered beyond religious boundaries; in the same way that she evokes admiration beyond religious identification; so too a fundamental message of faith is communicated beyond the framework of her particular Christian worldview. It is a message of faith in darkness, an affirmation of divine presence in absence and the recognition that the feeling of God’s absence need not lead us to abandon our attachment to God. Rather, it can manifest as goodness to others, in His name.