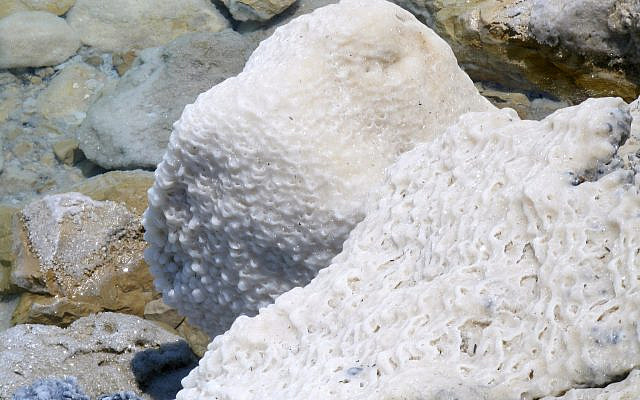 And every meal-offering of thine shalt thou season with salt; neither shalt thou suffer the salt of the covenant of thy God to be lacking from thy meal-offering; with all thy offerings thou shalt offer salt.” (Leviticus 2:13)

Torah dictates that all offerings to God must be brought together with salt. Classical commentators ask: What is so special about salt that it is an indispensable ingredient of any sacrifice? Moreover, why is it called the covenant of salt? Nachmanides explains:

The Torah also uses this covenant as a model for other covenants, as both the priestly covenant[1] and the Davidic covenant[2] are called “covenant of salt” because they are upheld just as the sacrificial covenant of salt…. I am of the opinion that the significance is that the salt is water, which by the power of the sun that comes is made into salt, while the water saturates the Earth, impregnates it and makes plants flourish.”  (Ramban al HaTorah, Vayikra)

Salt is seen as a somewhat paradoxical substance possessing opposite properties. On the one hand, salt is essential to life. Salt has been known since antiquity to preserve food (particularly meat) from spoilage. On the other hand, oversalted food becomes unpalatable. We begin a meal with dipping bread in salt, but we conclude the meal by washing fingers with water (mayim acharonim) to wash off any residue of salt of Sodom. (Zohar 271b)

Sodium ions (Na+) are required in small amounts by some plants. Sodium is needed in large amounts by animals to generate nerve impulses and to maintain electrolyte and fluid balance. Sodium chloride is vital for maintaining extracellular fluid in multicellular organisms. In medicine, saline—the solution of sodium chloride—is used for intravenous infusions. On the other hand, excessive salt consumption can aggravate hypertension. And soil with a high concentration of salt is infertile. As the Torah says, “Sulfur and salt have burnt the entire land.” (Deut. 29:22) Also, when Abimelech destroyed the city of Shechem, he “sow[ed] salt on it” (Judges 9:45), to render it barren and prevent its repopulation.

Rabbeinu Bechayeh cites another example of salt’s contradictory properties, which is found when Prophet Elisha comes to Jericho:

And the men of the city said to Elisha, ‘Behold, the situation of this city is pleasant, as my lord may see; but the water is bad, and the ground causes untimely births.’ And [Elisha] said, ‘Bring me a new flask and put salt in it.’ And they brought it to him. And they went out to the spring of waters, and cast salt in there, and said, ‘Thus says the Lord, I have healed this water; there shall not be from there any more death or miscarriages.’ So the water was healed to this day, according to the saying of Elisha.” (II Kings 2:19-22)

Rabban Gamliel exclaims in the Mechilta:

How more wondrous are His deeds and ways than the ways of mortals… He put the polluting agent into the polluted material to perform a miracle within a miracle.” In Kabbalah, these contradictory properties of salt are explained by attributing the spiritual origin of salt to the synthesis of two opposites: thesis and antithesis, specifically, the Sefirot of Chesed and Gevurah. Every thesis is limited by its antithesis. Chesed (kindness, giving—the right column of the Sefirotic tree) is limited by Gevurah (judgment, receiving—the left column of the Sefirotic tree): the tendency to give (Chesed) is limited by the worthiness of the recipient to receive (Gevurah). And conversely, judgment is mitigated by kindness. Synthesis, on the other hand, is unlimited. The Sefirah of Tiferet (mercy) is in the middle column of the Sefirotic tree. It is not limited by Chesed or by Gevurah. One can have mercy on someone who doesn’t deserve it. Similarly, the Sefirah of Yesod—which is in the middle column under the Sefirah of Tiferet—is called “foundation,” because of its stability and endurance.

Salt, as the embodiment of synthesis, symbolically represents infinity and eternity. This is why the Torah refers to covenants—including the priestly covenant and the Davidic covenant—as covenants of salt.

As we said before, Kabbalah sees the spiritual root of salt in the synthesis of antagonistic Sefirot—Chesed and Gevurah. Nachmanides (as well as another Biblical commentator, Rabbeinu Bachya) points out that salt is usually sourced from seawater evaporated by the sun. Water and fire are opposites—water extinguishes fire, and fire evaporates water. Yet, when the sun’s heat (symbolically understood as “fire”) evaporates seawater, what remains is salt. Rabbi Schneur Zalman of Liadi also refers to this in his Chasidic discourse[3] on this Torah portion.

This paradigm of salt as the result of a synthesis of opposites can be extended to the chemical level. Salt is the byproduct of a chemical reaction between a base and an acid. Crystal structure with sodium in purple and chloride in green, by Benjah-bmm27

However, it can also be attained by a combination of sodium hydroxide, which is a base, and hydrochloric acid, which is an acid.

An acid is a molecule (or ion) capable of donating a proton. From the point of view of Kabbalah, that places acid on the right column, Chesed, which is the impetus to give. A base, on the other hand, is a molecule that receives a proton from a donor (acid). This places base on the left column, Gevurah, which is the impetus to receive. A base reacts with an acid to form a salt. This is why salt is a perfect metaphor for the synthesis of opposites, as is born out of the chemical reaction between two opposites, a base and an acid or, in Kabbalistic imagery, Chesed and Gevurah. Salt is very stable,[4] which is why it is emblematic of an eternal covenant.

This is an example of how contemporary science allows a deeper understanding of Torah concepts.

[1] “Priestly covenant” refers to the eternal covenant God made with Aaron and his children: “All the sacred gifts that the Israelites set aside for the Eternal I give to you, to your sons, and to the daughters that are with you, as a due for all time. It shall be an everlasting covenant of salt before the LORD for you and for your offspring as well.” (Numbers 18:19)

[2] “Davidic covenant” refers to the eternal covenant God made with King David promising him that his descendants will rule Israel forever: “Surely you know that Eternal, the God of Israel, gave a kingdom to David over Israel eternally, for his descendants, a covenant of salt.” (2 Chronicles 13:5)

[4] The Talmud (Bechorot 8b) records a disputation between the Sages of Athens and Rabbi Yehoshua son of Chananya, which took place during the first century CE. They asked him, “When salt gets spoilt, what do we use to preserve it?” His response: “We use the afterbirth of a mule.” “Do mules have afterbirth?” they asked. [A mule is the offspring of a male donkey and a female horse. Horses and donkeys are different species, with different numbers of chromosomes (horses have 64 chromosomes and donkeys have 62). As a result of chromosomal mismatch mule is usually infertile.] “Does salt spoil?” he retorted.