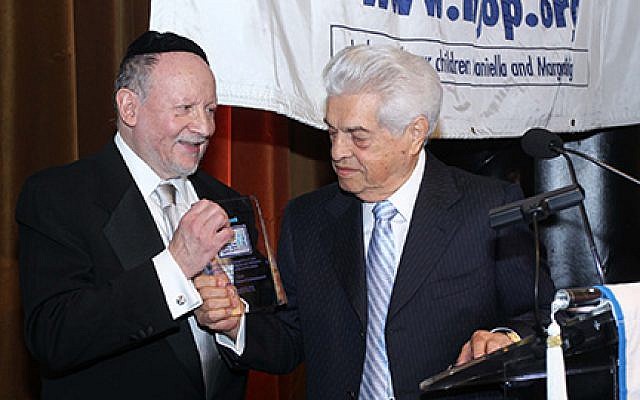 It was 1966. We didn’t know if the Cold War would turn hot or not. A hopeful young Marvin Hier started a new job at a congregation in Vancouver. He got a call from City Hall.

“Rabbi, we’re taking a survey. In the event of a nuclear incident, how many people can your synagogue sleep?”

With that jocular opening, Rabbi Hier was an instant hit at NJOP’s 31st anniversary  on Feb. 19 at the Edison Ballroom on Manhattan’s West Side.

Now that he had our attention, Hier remarked on the “incredible” job Rabbi Efraim Buchwald has been doing as founder and director of the National Jewish Outreach Program, now known as NJOP.  According to the organization, it has generated “Jewish Treats” on the YouTube channel as well as such diverse programs as Shabbat Across America and crash courses in basic Judaism at 5,089 synagogues and Jewish centers across North America, reaching 1,653,734 Jews as of Dec. 12. 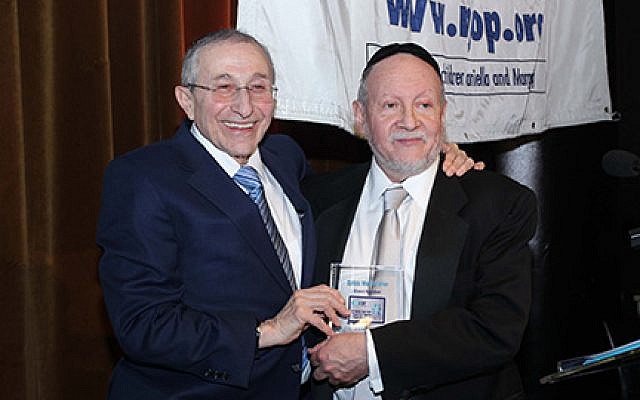 Rabbi Hier, who arrived in Los Angeles in 1977 and became founder and dean of the Simon Wiesenthal Center, said that as long as there is a planet Earth there will always be evil. “Evil exists and it is our responsibility to confront it and  extinguish it.”

Rabbi Buchwald introduced Sam Domb, a major New York real estate mogul and possibly the most powerful supporter of NJOP, as one intimately familiar with evil.

In 1939 the Nazi invaders rounded up the Jews of Pultusk, Poland, including five-year-old Sam in his mother’s arms along with his father and three sisters. As they crossed the bridge out of the city, his mother tripped and was immediately shot. His father, without blinking, turned around, lifted the boy and kept walking.

Separated from the rest of the family, Sam was taken with other Jews to face a firing squad. A 10-year-old kid grabbed Sam’s hand and told him to run into the forest with him. They had nothing to lose; they were going to be killed anyway.

Sam survived, as did his father and sisters. Sam went to Israel, served in the Hagana, and eventually came to New York.

“The toll that the Holocaust took on him was profound,” Buchwald said. “We ask ourselves, if we were in his position, could we ever smile again?”

“I was born to a generation,” Sam said, “where the Jewish people were burnt to ashes. They were denied asylum by President Roosevelt. He had no compassion for those Jews. Justice for me did not prevail.”

While Sam does not smile excessively, he became a major philanthropist and made other people smile.

“The other day a woman with 13 children needed help,” Buchwald said. “Amazingly, Mr. Domb had been paying for her children’s education for eight years, and this was the first time he even met her in person.”

Buchwald announced that Sam has a special reason to smile these days. The first of his grandchildren, Adam, recently married Anna Aschendorf. Mazel tov!