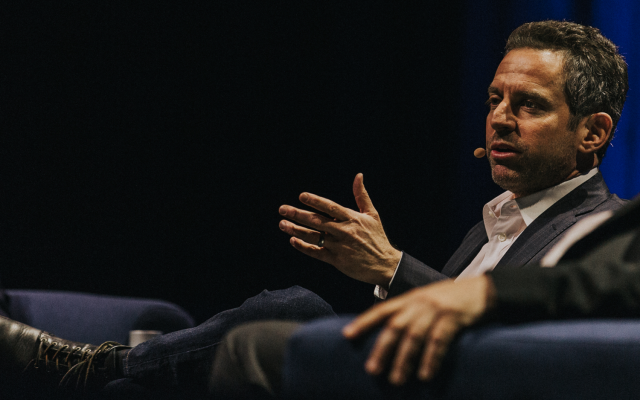 Religion can be a touchy subject for some, but not with the likes of Sam Harris. A stern critic of religion, Islam in particular, he also dabbles in spirituality, ethics and politics.

On Sam Harris’s podcast, Making Sense, he addressed questions about atheism, politics and self to name a few. His views about science, self, and atheism are also shown on his books, such as the The Moral Landscape: How Science Could Determine Human Values and Waking Up: A Guide to Spirituality Without Religion.

People who have been following him have noticed that Judaism has been relatively spared in contrast to the other monotheistic religions . Is he favoring Israel and Judaism in particular?

Despite popular belief that Sam Harris is being mum about Israel and Judaism, or at least is controlling his censure about the two, he has stated that they receive the same rhetoric he gives to others.

He admitted he was still undecided what his specific thoughts are on Israel; he has some points that might offend people, but he’d like it to be known.

He does not believe we should consider Israel as a Jewish state, whatever may show on the Bible. Although if the reason for claiming Israel as a Jewish state with the sole purpose of protecting people of a religion, then it is right that Israel is considered a Jewish state. Although he said that unlike how people describe themselves as Christian or Muslim, that is to denote their religiousness, it would not be the case with describing Israel as Jewish. No matter if Israel is less religious than the US, people still have the freedom of choosing their own religion or beliefs.

For territorial disputes, Sam says that Israel does not differ from its neighbors, having to resort to terrible tactics when need be. However, he mentions that Israel’s behavior towards the Palestinians is largely a product of their enemy.

“They have been brutalized by this process—that is, made brutal by it. But that is largely the due to the character of their enemies.”

Israel has done more than their fair share during the war with Palestine, but compared to the US, or Western European countries, Israelis have shown more restraint during their wars. Sam believes that the scrutiny Israel has experienced is on a far different level than their counterparts.

He also observed that in loss of life, there have been a lot of civilian lives lost on the Palestinian side compared to the Israelis. He does not understand why this happens in the moral sense, wondering why Israelis are blamed for this when they do their best to protect their own citizens but get blamed when there are so many civilian Palestinians killed during the wars.

Sam also says that we cannot stop the photos or videos coming out of the war zone in Gaza. People will see the dead, already thinking how evil Israel is, killing women and children alike. Israel gets blamed in the process, and he believes that this should not be the case.

He also argues that the countries surrounding Israel have genocidal tendencies, Sam cites the charter of Hamas to serve as proof how the Muslims are when it comes to Jewish life. He uses this to cite the difference between the Israelis and the Palestinians. That is if we consider history, there have been several events where Hamas has done monstrous acts, citing the Olympic Munich Massacre in 1972 as an example.

Sam knows that there are Palestinians who do not support Hamas, but the terrorism is palpable, and is the reason why there will be no peace between the two countries.

In the end, Sam notes that considering past events, Israel needs a breather on the condemnation it is experiencing in the international scene. Compared to Hamas, ISIS and al-Qaeda, they have done far worse atrocities, and that Israel only retaliated like how other countries would if they experienced the same.

About the Author
Michael Peres is a software engineer, radio host, full-time traveller, writer, consultant, serial entrepreneur and the pioneer behind the Breaking 9 To 5 business model. At a young age, Mikey Peres was diagnosed with ADHD and other learning disabilities. Over the years, he’s managed to develop his own unorthodox methods of functioning, which have inspired his current lifestyle. Moreover, his lifestyle has inspired an entire movement helping others take control of their own future and do the same.
Related Topics
Related Posts
Comments