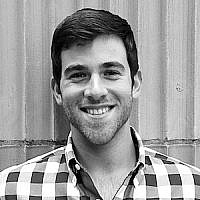 The Blogs
Tyler Gregory
Apply for a Blog
Please note that the posts on The Blogs are contributed by third parties. The opinions, facts and any media content in them are presented solely by the authors, and neither The Times of Israel nor its partners assume any responsibility for them. Please contact us in case of abuse. In case of abuse,
Report this post.

At the center of Jewish life lies the family — raising and educating children, providing a loving and caring home, helping children to develop strong values and character, and enabling them to discover the treasure of our traditions. L’dor v’dor. The role of the family in Israel, as in Jewish communities everywhere, is central to the continuity of the Jewish people.

The Israeli ministers defending adoption inequality are creating a “crisis of family.” Legally, same-sex families are able to adopt in Israel, but in practice, the State puts their applications at the bottom of the pile, and they are only allowed to adopt a child if no willing heterosexual parents can be found. There have been no more than a handful of instances in the past decade of adoption in Israel by same-sex families. Yet the demand is there and growing – many Israeli same-sex families have used channels abroad, primarily adoption and surrogacy outside of Israel, to create loving families.

A Wider Bridge stands in support of the Israel Religious Action Center and the Israeli Association of Gay Fathers, who went to the High Court to compel the State to end adoption inequality. The government’s brief to the Court – which stated that adoption by “irregular” families creates “added baggage for the children” – was quickly retracted, but their policy position remains. The Court has given the State three months to develop a new position on the matter.

The government’s brief and position have created a justifiable uproar throughout Israeli society. LGBTQ Israelis, their families, and allies across the country are speaking out with unparalleled unity at both the callousness and ignorance of the government’s position. I am writing to add our voice to their cause, and we have mobilized Jewish leaders across North America to do the same.

After decades of advocacy by its LGBTQ community, Israel has become a leader in many areas of LGBTQ equality, including allowing LGBT people to serve openly in the IDF and providing same-sex families with many of the same benefits and protections that the law provides to straight families. Adoption by same-sex families has been one of the glaring exceptions. On this issue, perhaps there is something for Israel to learn from our experience.

In the United States, with a recent federal court decision in Mississippi, adoption by same-sex families is now legal in all 50 states, and in many states such adoptions have been legal for decades. For example, in New York, where many Jewish same-sex couples live, adoption by same-sex couples has been legal since 1995. According to research done at The Williams Institute, same-sex parents raise 4 percent of all adopted children in the United States – one in twenty-five.

In the case of United States v Windsor (brought by a lesbian Jewish plaintiff), the United States Supreme Court focused specifically on this issue, raising issues involving dignity, respect and community that are fundamental to the Jewish tradition. Specifically, Justice Kennedy’s opinion for the Court explained that a critical problem with policies like the current one in Israel that deny equal protection to gay parents is that they “humiliate . . . [the] children now being raised by same-sex couples [making] it even more difficult for the children to understand the integrity and closeness of their own family and its concord with other families in their community and in their daily lives.”

We have particular experience with this in our Jewish communities. For example, institutions like Jewish Family and Children’s Services have served as leading facilitators of adoption by same-sex families. And our Hebrew schools, day schools, camps and youth groups across the country are filled with bright, well-adjusted children from families with same-sex parents. There are many important qualities that lead to strong, well-adjusted families – but the sexual orientation of parents is not among them.

It is time for the Israeli ministries who control the adoption process to acknowledge this reality, and to treat the country’s same-sex families and would-be parents with the equality they deserve. Israel and the Jewish people will be better off for it.

Tyler Gregory is Deputy Director of A Wider Bridge.

About the Author
Tyler Gregory is Deputy Director of A Wider Bridge, the pro-Israel organization building connections between LGBTQ people of North America and Israel.
Related Topics
Related Posts
Comments