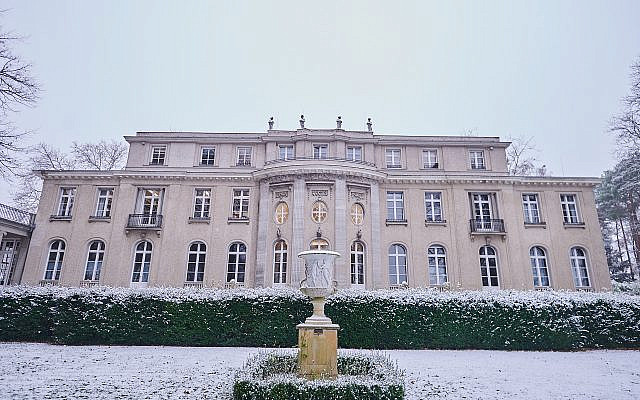 Snow lies in front of the House of the Wannsee Conference. On January 20, 1942, high NSDAP and SS officials met in the villa on Berlin's Wannsee.

Eighty years ago this week, the Wannsee Conference convened. It was named after the villa in Nazi Germany where the conference took place, and its purpose was to find a “final solution to the Jewish question” and make it Germany’s official policy. The result: a detailed work plan to exterminate all 11,000,000 Jews living in Europe and the Soviet Union. There was no drama at the conference, no expressions of hatred, just facts and details. Even words like “extermination” or “killing” were absent from the minutes of the conference. The final document simply stated, “Approximately 11 million Jews will be involved in the final solution of the European Jewish question.”

This is the face of institutional antisemitism, the most diabolical form of the most tenacious hatred. Like the rest of its siblings, this genre of hatred did not die at the end of World War II; it simply moved to a more spacious lodging. Now residing on Manhattan’s East Side, it has an entire complex at NY 10017, New York City, and the name of its new residence is the United Nations Headquarters. Everything else, however, has remained the same: The same hatred and the same determination to demolish the Jews.

There are, however, two differences between then and now: 1) The immediate target of the hatred has shifted from the Jews to the Jewish state, Israel. The Jews themselves will be dealt with later, once the Jewish state has been exterminated. 2) The Jewish question is no longer an internal German or European matter, as some countries argued during the war to excuse themselves from saving Jews. Today, the hatred spews openly from the entire world toward the entirety of the Jewish people.

In the worldwide campaign against Jews, every pretext is exploited and every trouble is pinned on the Jews. Not only Israel’s military campaigns to protect against rocket attacks from Gaza are exploited, but every misfortune that happens anywhere is blamed on the Jews. From the 9/11 terrorist attack through the 2008 financial crisis, to the Coronavirus, everything is pinned on the Jews.

We, the Jews, have but one remedy, one “vaccine” to protect us from adversity. Regrettably, for centuries, we have been the staunchest anti-vaxxers and have refused to swallow it: Our vaccine against hatred is internal cohesion.

Every spiritual leader since the inception of our nation has implored us to take it. Every prophet and every sage both promulgated it and warned us of the consequences of avoiding it. We have never listened, and we have always suffered the consequences.

The time is approaching when another round of Jewish anguish will unfold. As with everything these days, it will not be a local torment but a worldwide agony. As then, so now, the choice is in our hands to take the vaccine of Jewish cohesion above all divisions, or suffer the civilized, replete with euphemisms, deadly wrath of the world.

For more on the importance of Jewish unity, see my book The Jewish Choice: Unity or Anti-Semitism.