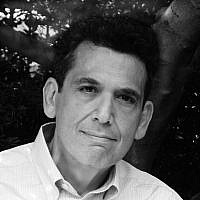 The Blogs
Gary Weiss
Apply for a Blog
Please note that the posts on The Blogs are contributed by third parties. The opinions, facts and any media content in them are presented solely by the authors, and neither The Times of Israel nor its partners assume any responsibility for them. Please contact us in case of abuse. In case of abuse,
Report this post.

I’m rooting for Saudi Arabia getting a seat on the U.N. Human Rights Council.

Ever since the Saudis emerged as a candidate for a seat on the council, there has been widespread outrage. After all, one would be hard-pressed to find a regime less dedicated to human rights than the absolute monarchy that currently rules the Arabian peninsula.

Indeed, the suggestion has almost humorous overtones–like Charles Manson petitioning to the California parole board to be released so that he can become director of a school for girls.

There are various other analogies that have been made, such as this one:

Hillel Neuer, from UN Watch, a non-governmental organization based in Geneva whose mandate is to monitor the performance of the United Nations, charged that “making Saudi Arabia a world judge on women’s rights and religious freedom would be like naming a pyromaniac as the town fire chief.”

Mr. Neuer is of course correct. The UNHRC is an organization that has virtually no reason for existence–other than to focus on the No. 1 source of human rights violations in the world, which is, of course, Israel. But it is ostensibly a human rights council, and if it is to be taken seriously you can’t have countries like Saudi Arabia on the council.

That brings me to my point, which is that the UNHRC has become a kind of ongoing entertainment, a very well-financed theater of the absurd, reflecting more the spirit of Eugene Ionesco than Mahatma Gandhi.

To fully appreciate the comic possibilities, Saudi Arabia absolutely must be on the UNHRC, and so must every other tinhorn dictatorship, failed state and repressive monarchy on the planet. Every regime that persecutes gays, crushes the press, promulgates medieval anti-Semitic libels, views women as chattels, lops off the hands of thieves, stones adulterers–well, you get the idea.

Let’s bring ’em into the council. For example, how about Venezuela? It is one of the worst violators of human rights in Latin America, with attacks on freedom of expression and violence against women. Amnesty International reports that journalists are “harassed, intimidated and threatened.”

Or Pakistan: “Amnesty International has long been concerned about the persistent pattern [of] human rights violations occurring in Pakistan.”

Or Saudi Arabia’s neighbors at the United Arab Emirates: “Amnesty International is [concerned about] reports of arbitrary arrest and torture of detainees. Political suspects in the UAE are commonly held incommunicado in undisclosed locations. . . The use of torture of political detainees has been widely reported. Methods have included sleep deprivation, suspension by the wrists or ankles followed by severe beatings to the soles of the feet and even the use of electric shocks to various parts of the body.”

Oh, my mistake. These are already members of the UNHRC. As I said, Saudi Arabia would fit right in. According to Human Rights Watch (which is hardly a member of the global Zionist conspiracy):

Saudi Arabia has stepped up arrests and trials of peaceful dissidents, and responded with force to demonstrations by citizens. Authorities continue to suppress or fail to protect the rights of 9 million Saudi women and girls and 9 million foreign workers. As in past years, thousands of people have received unfair trials or been subject to arbitrary detention, and public and other executions continue. Human rights defenders and others regularly face trial for peaceful expression or assembly, or for demanding political and human rights reforms.

Just the other day, an official of Human Rights Watch took the Saudis to task for “a statement by Dr. Bandar al-Aiban, the head of the governmental Saudi Human Rights Commission, who said that Saudi women do not face systemic discrimination in the Kingdom.” The title of the HRW article was “Who is Saudi Arabia attempting to fool?”

. . .grounded in the most restrictive interpretation of an ambiguous Quranic verse, prevents women from conducting official government business, travelling abroad, marrying, pursuing higher education, or even undergoing certain medical procedures without permission from their male guardians—a husband, father, brother, or even a young son. They are banned from driving.

The system reduces women to the status of children, unable to make important decisions about their lives. Despite the apparent lack of written legal provisions or official decrees explicitly mandating male guardianship, the Saudi government uses a complex arsenal of laws, policies and informal mechanisms to enforce this oppressive system. In the face of many calls to end male guardianship, including at today’s council session in Geneva, the Saudi government has tinkered around its edges, but has so far declined to unequivocally dismantle the system. In fact, it continues to play a central role in enforcing it, with the support of the religious establishment. In doing so, the Saudi government chooses to ignore not only international law but elements of the Islamic legal tradition that support equality between men and women.

I respectfully suggest that, like Mr. Neuer, the author of this article misses the point. She fails to appreciate the unintentional (or is it intentional?) humor being employed by Dr. al-Aiban. After all, anyone who would head an organization called the “Saudi Human Rights Commission” would have to have a sense of humor.

Ionesco once wrote, “You can only predict things after they have happened.” The UNHRC is a joke. I predict that it will continue to be a joke.

So let’s join in the fun. We can all use a good laugh. Elect Saudi Arabia to the UN Human Rights Council.

About the Author
Gary Weiss, is a veteran journalist and author. He is a longtime investigative reporter who was a senior writer for BusinessWeek magazine and a contributing editor at Condé Nast Portfolio. At BusinessWeek, his articles on Wall Street, focusing on stock fraud and organized crime in the markets, won widespread acclaim and numerous awards, as well as a rare commendation from the director of the FBI, Louis Freeh. He was a regular weekly columnist for Salon and TheStreet.com, and has taught at the Columbia University Graduate School of Journalism. His work has appeared in Parade, The Daily Beast, The New York Times and many other publications. His latest book is Ayn Rand Nation (St. Martin's Press, 2012). His previous books were Born to Steal (Grand Central, 2003) and Wall Street Versus America (Portfolio, 2006).
Comments