The Blogs
Varda Epstein
Apply for a Blog
Please note that the posts on The Blogs are contributed by third parties. The opinions, facts and any media content in them are presented solely by the authors, and neither The Times of Israel nor its partners assume any responsibility for them. Please contact us in case of abuse. In case of abuse,
Report this post. 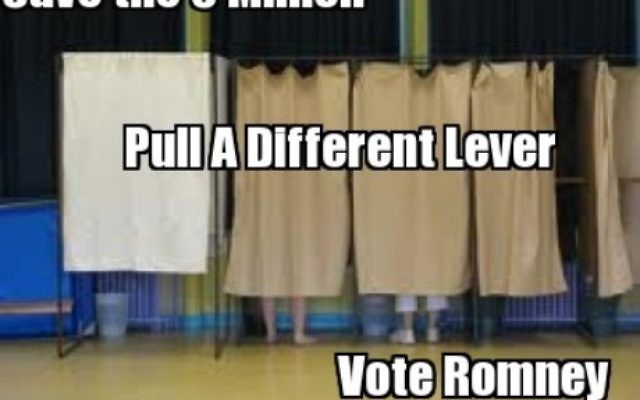 On Friday, a Facebook friend posted as his status: “We are 20 days until the most important election of your lifetime. Ask yourself, ‘Have you done all you can do?’”

That gave me pause for thought.

I examined my actions over the past several months.

I have regularly posted what I believe to be intelligent, fact-based articles about the election that support my candidate.

I have engaged in honest debate with those in the opposite camp whenever the occasion arose.

I voted by absentee ballot.

I blogged about the election several times on the pages of the Times of Israel website.

And then I read Jonathan Rosenblum’s article, Spare Me “Never Again.”

Suddenly, it seemed so simple.

We need to be asking American Jews just this one question:

“If you could have saved the 6 million by pulling a different lever, would you have done so?”

Think about it: Ahmadinejad is threatening to nuke Israel, whose Jewish population now matches that of the number of Jews murdered in the Holocaust. And Obama refuses to draw the red line that will serve to stop the evil intentions of the Iranian despot.

back down on its efforts to create a nuclear bomb. He wants to continue the sanctions, even though all sanctions accomplish is to punish civilians and starve little children.

Sanctions don’t have any effect on despots, only on the civilians who suffer their daily reign.

Voting for Obama essentially means game over. Voting for Obama means we will soon have a nuclear Iran: an Iran that has vowed to take out Israel and then the U.S. with nuclear weapons.

Voting for Romney, on the other hand, means a show of military might. And that’s all Israel wants really: a show.

Not the real thing.

We don’t want anyone to attack anyone. And we know that if America threatens Iran, it will indeed back down and halt its march to the bomb.

And we know that voting for Romney means that the red line will be drawn. Iran will be shown that its race for the bomb will not be tolerated.

All Americans need do to prevent a nuclear Holocaust of 6 million Israeli Jews is to pull a different lever on Election Day.

About the Author
Varda Epstein is a blogger and Communications Writer for Kars4Kids.org www.kars4kids.org
Comments