The Blogs
Avi Shamir
Apply for a Blog
Please note that the posts on The Blogs are contributed by third parties. The opinions, facts and any media content in them are presented solely by the authors, and neither The Times of Israel nor its partners assume any responsibility for them. Please contact us in case of abuse. In case of abuse,
Report this post. 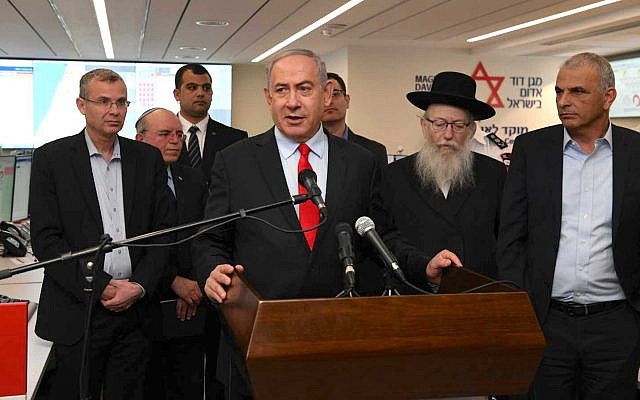 The tough decisions to shut down Israel, from the skies to the schools, were not conceived by Bibi Netanyahu. They were the conclusions drawn by the folks who run our health system, which was underfunded under Bibi’s long watch and on the point of collapse long before we were threatened by the coronavirus.

In the most recent election, critics of the Blue and White party’s lifeless campaign were asking why Benny Gantz did not draw attention to the urgent needs of our health system. Now, barely ten days after the election results showed once again that neither candidate can secure enough mandates to form a government, the state of our hospitals and medical facilities are exposed, as luck would have it, just as a pandemic is casting a dark cloud over our economy, way of life and very well-being.

Health Ministry Director General Moshe Bar Siman-Tov, who knows the economics of health crisis management, comprehends that our underfunded hospitals are not up to the task of coping with a plague of this magnitude, one that can spread overnight, God forbid, to claim thousands of victims. He no doubt expressed these grave concerns to the prime minister. Hence, the arguably draconian measures to contain the virus before it gets out of hand and the hospitals become overwhelmed.

Leave it to Bibi, that master of political opportunism, to turn a major crisis into political coin. On Thursday night, we heard the PM announce that he’s shutting down the schools. As I listened to his assessment of the severity of the virus, and heard him repeat his warnings to keep a safe distance from others, avoid handshakes and cover our noses with tissue when we sneeze, I couldn’t help but think that he was talking to us like we’re the same schoolchildren he’s sending home.

The state of our national health, which Bibi apparently didn’t take into account all those years he was buying his supporters at the expense of health, education and other vital areas, was of course secondary to his real concern. Bibi’s call for an “emergency government” with Gantz underscores that the real “crisis” facing him isn’t the one that is shutting down Israel, but his court date, now just days away.

It may be old news, but our diehard PM is still looking for a way to legitimize immunity from prosecution and save himself from the legal mess that can destroy his political career and land him in prison. The corona plague came just in time for Bibi. But not only for Bibi. Just after his announcement to shut down the schools, a delegation of Bibi devotees rose to the podium to sing his praises: Moshe Kahlon, the Finance Minister who couldn’t or wouldn’t provide the funds to save our health system; Yaakov Litzman, the Health Minister who knows as much about health as he knows about rocket science; and Rafi Peretz, the Education Minister who was so confused he didn’t even know which students would be affected by the shutdown of the schools. Three clowns demonstrating their ineptitude for all to see in a pathetic call for an “emergency government.” As if we had a government to speak of over the past year. As if those one hundred and twenty frauds who fill the Knesset are earning their pay.

Israel is facing an unprecedented health crisis. We have to put our trust in those who understand the dynamics of maintaining public health under crisis conditions. This country doesn’t need a prime minister who faces criminal charges, not in good times, certainly not in these dark times. And the last thing this country needs is an “emergency government” led by a devious Bibi and a stammering Gantz.

About the Author
Avi Shamir is a freelance writer, editor, translator and the author of "Saving the Game," a novel about baseball. A Brooklyn College graduate with a BA in English, Avi has contributed to the Jerusalem Post, The Nation, Israel Scene, In English and The World Zionist Press Service.
Comments