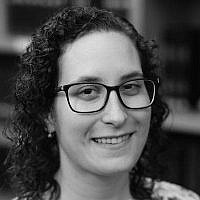 The Blogs
Phoebe Ana Rabinowitsch
Apply for a Blog
Advertisement
Please note that the posts on The Blogs are contributed by third parties. The opinions, facts and any media content in them are presented solely by the authors, and neither The Times of Israel nor its partners assume any responsibility for them. Please contact us in case of abuse. In case of abuse,
Report this post.

This week’s parsha, Shemot, begins with the names of the sons of Israel who came to Egypt with Jacob, each coming with his household. The Israelites were prosperous, even after Joseph’s death, until a new king rose to power who “did not know Joseph” was threatened by the many Israelites and their power. The new king oppressed them and enslaved them. The people of Israel are in need of help, and our parsha presents two alternate models of how to resist oppression and help the oppressed.

“But the more they were oppressed, the more they increased and spread out, so that the [Egyptians] came to dread the Israelites.” (Exodus 1:12)

This statement causes me to wonder, what might it mean for an increasing minority population to become the target for oppression? How might increasing population size be the driving factor? The more they were afflicted, the more they multiplied, or it could mean that the more they spread out all over the area, they appeared to be more numerous.

Pharaoh tells the midwives to kill male children and leave the female ones, but the midwives let them live, as it states that they feared God. When Pharaoh asked why they let the babies live, they answered:

The midwives said to Pharaoh, “Because the Hebrew women are not like the Egyptian women: they are vigorous. Before the midwife can come to them, they have given birth.” (Exodus 1:19)

The verse states that the midwives fear God and cannot kill, but yet they tell Pharaoh that it is the Hebrew women’s nature to give birth before the arrival of the midwives. The midwives claim that they would like to obey and assist Pharaoh, but it is beyond their control. By lying to Pharaoh the midwives are able to act in accordance with their beliefs, and yet appear to be obeying the law. Ibn Ezra comments:

ותאמרנה. לא עברנו על מצותיך כי העבריות אינן כמצריות כי כח חיים הרבה יש להם. AND THE MIDWIVES SAID UNTO PHARAOH. We have not violated your command because the Hebrew women are not like the Egyptian women; they have greater vitality.

We know that Moshe was saved by being sent down the river and found by Pharaoh’s daughter and raised in the kingdom. Later in the parsha, Moshe witnesses a Hebrew slave being beaten by the taskmaster and immediately acts out against it. Moshe’s response is both to the people and to God, questioning why this horrible act against humanity is allowed to happen.

Moshe is saved by the midwives and then his sister Miriam, to later be the one to stand up against oppression of the Israelites, which he can likely only do in his unique role as an outsider/insider between being raised as an Egyptian and really being an Israelite.

Each act served the purpose to save the Israelites from their death in that moment, but the difference is working within the existing system or rebelling against it. Perhaps Moshe was able to rebel because of the people before him who slowly and quietly saved lives. The two approaches featured, namely, working within the system to serve the people like the midwives, or  acting outside the system, like Moshe, do not need to be in contrast to one another. Each situation for positive change might warrant a different response. What worked well for one case was not what was needed in the other.

About the Author
Phoebe Ana Rabinowitsch is a student at Yeshivat Maharat in the class of 2022. She has completed various internships including placements with a national voter registration campaign, Hillel International, chaplain intern at New York-Presbyterian Hospital and served as Multifaith Intern with New Sanctuary Coalition through Truah's Rabbinical Student Fellowship. She has completed the cross seminary organizing course with JOIN for Justice and The Jewish Innovation Fellowship at the 92nd Street Y. Phoebe Ana studied at The Hebrew University of Jerusalem and at Middlebury College Language Schools, and has studied Torah at Drisha, Hadar and Pardes, where she was involved in organizing a weekly partnership minyan. She has experience teaching English as a Second Language to adult learners and Hebrew and Judaic studies at various religious schools in New York City. She grew up in South Florida and earned a B.A. in Religion and Anthropology from American University (Washington, DC). Phoebe Ana is interested in exploring how to create a supportive and nourishing environment for all and is committed to further pursuing a society that reflects our values. She lives in Washington Heights, New York and serves as Partnerships Lead at Tzedek Box.
Related Topics
Related Posts
Comments