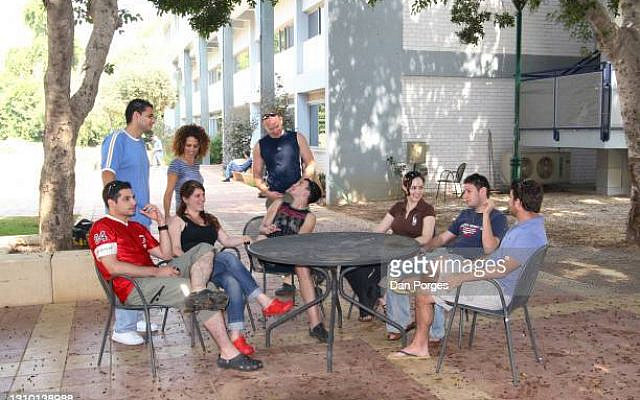 View of a group of students as they talk together at an outdoor table on the campus of the Afeka College of Engineering, Tel Aviv, Israel, June 21, 2007. (Photo by Dan Porges/Getty Images)

On March 22, the Middle East Studies Association (“MESA”) hammered the final nail in its coffin as a valuable educational institution.  It was instantly reborn as a malevolent, politically motivated entity that now openly advertises an anti-intellectual, biased, and discriminatory mission.

I refer to MESA’s long-awaited endorsement of its Boycott, Divestment, and Sanctions (“BDS”) resolution.  MESA formally has chosen sides in a political, territorial dispute, approving by a vote of 768 to 167 a resolution that “endorses the 2005 call of Palestinian civil society for BDS against Israel.”

Bold words for a purported educational nonprofit with 501(c)(3) status.

In essence, MESA plans to boycott Israeli institutions of higher learning because of their ostensible connection to the Israeli government, provision of military technology, and mere presence in a land MESA would like to render Judenrein.

MESA’s action is illogical, immoral, but most importantly, illegal.

Any implementation of the boycott per force will involve discrimination against academics on the basis of their Israeli nationality or their faith. The Civil Rights Division of the Department of Education should investigate any actions taken pursuant to the resolution.  This should include universities that pay for faculty memberships or are institutional members of MESA.

Universities may not care much for the comfort of their Jewish students and faculty these days, but you can bet they take the threat of withholding of federal funding seriously.  And, whether public or private, very few universities are not impacted in some manner by federal funding.

Students and academics should be teeing up complaints and cases against any Middle East Studies departments that attempt to enact the resolution.  They should make their administrators and board members aware of the legal liabilities created by those department signatories to the resolution.  For the department threatens more than itself when it violates the Civil Rights Act.  It threatens funding to the school as a whole.  Administrators and university boards need to get a handle on their Middle East Studies departments immediately if only to protect themselves and all of their students from the reckless actions of a few zealots.

The question of how an educational organization can lose its nonprofit status for abusing its exemption by advocating a policy viewpoint has been considered and litigated.  While the term “educational” is not defined in the Internal Revenue Code, it was given texture in a Treasury regulation.  That regulation gave rise to a test, and one that MESA’s actions cannot meet.

The regulation provides that an organization that advocates a specific position or viewpoint can only qualify as educational if it presents “a sufficiently full and fair exposition of the pertinent facts” so that people can “form their own opinion or conclusion.” (Treas. Reg. § 1.501(c)(3)-1(d)(3)(i).)

It is hard to present a full and fair exposition of facts allowing people to reach their own conclusion when enforcing a boycott against half the facts and the entire opposing opinion. The very method employed – an educational boycott silencing Israelis – renders it impossible to meet this test.

To date, 35 states have enacted anti-BDS legislation that penalizes institutions for supporting BDS or engaging in boycotts of Israel.  Many of MESA’s member institutions reside in those states. Governors should remind these schools that the law applies to them. Give this legislation teeth and penalize those who flout it openly.

Not only does membership in MESA now threaten the nonprofit status of educational institutions, render them in contravention of anti-BDS legislation, and expose them to investigation and censure by the Department of Education, but it is antithetical to the purpose of higher learning.

Already, Middle East Studies departments at Brandeis, Boston College, Duke/UNC, Florida State, the University of Arizona, and the University of Illinois Urbana have withdrawn from MESA.  Any department that fails independently to take this action should be required to do so by university anti-discrimination policy.  Any university worth its salt will recognize that academic boycott of Israel runs counter to its very mission.

Peace is only possible through mutual appreciation of language, culture, history, religion, and philosophy.  It is essential to advancing understanding, respect, and progress.  MESA’s resolution closes doors, cuts lines of communication, and impedes interaction.  By acting on its bias, it has lost all credibility as a professional association and undermined its educational mission.

It is time to say Kaddish over MESA.

About the Author
Ellen Ginsberg Simon is an attorney and compliance professional in Upper Saddle River, New Jersey. She has an M.Phil in Modern Middle Eastern Studies from Oxford University and is also a graduate of Brown University and Harvard Law School.
Comments