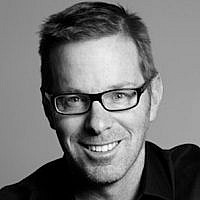 The Blogs
Hugo Schwyzer
Apply for a Blog
Advertisement
Please note that the posts on The Blogs are contributed by third parties. The opinions, facts and any media content in them are presented solely by the authors, and neither The Times of Israel nor its partners assume any responsibility for them. Please contact us in case of abuse. In case of abuse,
Report this post.

Heloise (7)  and David (whom we call Chuchi, 4) and I are crossing the street on the way to an early dinner at Shalom Pizza.

“Where?” demands Chuchi, a second before he sees the red, brown, and black remains of the fluffy-tailed rodent. One car killed the little guy, and judging by the state of things, dozens more have successively flattened him (her?) over what’s probably been at least three or four hours.

Heloise implores her brother to turn away. “We’re not supposed to look at dead things,” she reminds him.

It’s true that, in our community, there is a widespread superstition that to gaze upon dead things, even roadkill, is to expose oneself to the energy of death. It is better, some say, to avert one’s eyes. My kids have picked up that belief.

This is one superstition I will not indulge.

On the other side of the road, my son throws a small tantrum. “I want to see,” he cries. “Please let me see.” His sister is equally emotional. “You can’t, you can’t, it’s so bad, oh my God, it’s so bad.” They start shaking each other.

They are hot and tired and they want pizza and they’ve each had quite the day, so melodrama is on the menu at the corner of Whitworth and Wooster.

“Actually,” I say, “I think we should look. It’s just death, and death is part of life. If you want to, we can look together.”

The kids stare at each other, then each give tentative nods. We step out into the street, watching for cars.

Heloise: “I guess it’s not so bad. But we shouldn’t touch, right?”

Cars come and we go back to the sidewalk, and then, when there’s a lull in traffic, back into the street.

Chuchi: “I think it was a boy. Maybe he was trying to get home to his mommy.”

And with that, Chuchi begins to weep. Cars come again. Back to the sidewalk.

My kids hold each other, mourning the squirrel. Heloise comforts her brother with a task.

Heloise: “Chuchi, what do you think his name was?”

Chuchi: (hesitant, mournful) “His name was Yosef. He had many brothers.”

Someone paid attention to something in school.

Heloise: (to me) “Abba, what will happen to Yosef’s body?”

Me: “I’m sorry, bunny. I think a lot more cars are going to run over him, and then the city will come and scrape him up. But you know, he’s dead. He’s not in any pain.”

A car runs over Yosef for emphasis. Chuchi gives a small yelp of empathy.

Heloise: “Can we have a funeral for him?”

Heloise: “Can we say a blessing then?”

Me: “Should I say kaddish?”

(Kaddish is the Jewish mourner’s prayer. Some believe it may elevate the souls of the departed ones in whose name it is recited.)

I am a scandal unto the tribe. I begin. Then again, I haven’t read the tractate that says you can’t say kaddish for a squirrel.

I continue, probably making a hash of it. The kids stand solemn, looking from my face to the squirrel and back again. Three more cars pass, making Yosef still less like anything that once had a face.

They wait for a break in the traffic, and we walk back to the body.
Heloise: “Now, Chuchi.”

They begin the blessing they know by heart.

Heloise: “Abba, how do you say squirrel in Hebrew?”

Heloise: “Okay, what is it in Spanish?”

We are Angelenos, after all.

(A rough translation: “Blessed are you, Lord, king of creation, Squirrel Joseph son of Abraham, thanks be to God.”)

Back to the curb again.

I’m worried that the site of all of Yosef’s viscera will have ruined their appetites, but I’m soon set to rights. The kids are hungry and demand to go.

Or not just yet.

Heloise looks back at the street.

Heloise: “We should give him something first. Chuchi, help me pick flowers.”

The area is well-stocked; we quickly rustle up a blue hydrangea, a yellow rose and several dandelions.

One last pilgrimage to the middle of the street. The offerings are scattered onto most of Yosef, who is slowly being spread ever wider over the intersection, pieces of himself pushing on like intrepid satellites, away from home.

Heloise: “Yosef, you were a good squirrel, and even if you didn’t listen to mommy, she loved you very much and she still loves you. When she dies, she will come see you, so you don’t have to be afraid. Goodbye, Yosef.”

So help me, I am standing in the middle of the street, holding my children’s hands, crying over roadkill.

About the Author
Hugo Schwyzer is a freelance writer and editor and father of two, living in Los Angeles
Related Topics
Related Posts
Hugo Schwyzer
Comments