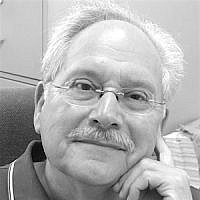 The Blogs
Jacob Sivak
Apply for a Blog
Advertisement
Please note that the posts on The Blogs are contributed by third parties. The opinions, facts and any media content in them are presented solely by the authors, and neither The Times of Israel nor its partners assume any responsibility for them. Please contact us in case of abuse. In case of abuse,
Report this post.

In an empathetic op-ed piece in the National Post (February 25, 2009) on the topic of anti-Semitism (Standing with the Jews), Ken Coates, a Canadian historian and a non-Jew, described a behavioural characteristic that may be unique to the Jewish people.  He described it as “scanning the world in three directions: to history for lessons, to the present for immediate threats, and to the future for signs of opportunity and peace.”

Although I didn’t have a name for it, I’ve been aware of this behavior for a long time.  Even as a young boy, growing up in the late nineteen forties and early fifties in Montreal, I sensed an element of concern and unease on Jewish matters and a need to keep up with the news.

One added point; part of the scanning that I engage in has to do with checking Letters to the Editor of whatever newspaper I happen to be reading.  The letters provide a complementary perspective on the issues of the day as portrayed by the readership.  Of course, I am also scanning for any comments or opinions related to Israel and / or Jewish concerns, such as the Holocaust; in part as a means of evaluating the views of readers who may not be Jewish.  I suppose that this is my way of carrying out an unofficial survey of the opinions of my neighbors; that is, the community I live in.

The last 10 to 15 years has seen an explosion of internet information, especially with respect to scanning possibilities.  Numerous on-line news sources and magazines are either freely available or available on subscription.  I scan through these daily and sometimes more often.  In addition to North American dailies such as The Globe and Mail and The New York Times, they include (in no particular order); the on-line Jerusalem Post, Algemeiner Journal, Arutz Sheva (also known as Israel National News), The Times of Israel, JTA (Jewish Telegraphic Agency), ynet (the on-line English edition of the Israeli newspaper, Yedioth Ahronot), Tablet Magazine, The Forward (the online descendent of Forverts), and the list goes on.

While I have never noticed a distinct pattern to my scanning behaviour, Professor Coates’ op-ed article on anti-Semitism may in fact be accurate.  I found, for example, that over a one week period in January 2018 I scanned for articles dealing with historical events, for example the deciphering of a Dead Sea scroll that sheds light on the power struggles that took place during the period of the Second Temple (Times of Israel, Jan 23, 2018).  I scanned the news for items related to immediate threats such as a report on the BBC News (Jan 31, 2018) concerning an anti-Semitic attack on a Jewish schoolboy in Paris.  I also looked for signs of opportunity and peace. For example, an article by Robert Satloff in the New York Daily News (January 26, 2018) titled A Historic Holocaust Awareness Awakening in Saudi Arabia, of All Places.

The last article was pointed out by a Jewish friend who is also a scanner.  We regularly e-mail potentially interesting articles to each other.  At times I receive items of interest from non-Jewish friends who are aware of the topics that interest me.

The scanning behaviour I am describing is not strictly limited to news events with Jewish content.  Indeed, all major current events, both national and international, are of interest.  However, the focus is clearly on stories that affect Jews.

Do other groups do the same?  For example, do Armenian Americans keep an eye on news items related to Armenian concerns?  Perhaps Ukrainian Canadians follow news about the fighting between Ukraine and Russian–backed separatists?  I really don’t know.  Nor do I know whether the behaviour I am describing is primarily a diaspora phenomenon.  I have had the opportunity to spend extended periods of time in Israel and I have the impression that while Israelis do pay close attention to the news that concerns Israel, they are less attentive to world news

From his article it is clear that Professor Coates attributes this behaviour to a sense of vulnerability among Jews, a sense that waxes and wanes over time.  I think he is correct and I find it comforting to note that he, a non-Jew, understands this.

In an online blog published in The Times of Israel (Dec 15, 2016) Rabbi Lord Jonathan Sacks puts it another way in a piece titled The Jewish Journey:

……”to be a Jew means not to be fully at home in the world. To be a Jew means to live ….between exile and home, and between the universality of the human condition and the particularity of Jewish identity.”

About the Author
Jacob Sivak, Fellow of the Royal Society of Canada, is a retired professor in the School of Optometry, University of Waterloo, where he continues to pursue scientific research. He has published an annotated memoir (Chienke’s Motl and Motl’s Cheinke:A Twentieth Century Story, Mantua Books,) related to his parents’ experiences as immigrants to Montreal and kibbutzniks in Palestine in the 1930s and he has written blogs and articles published in The Canadian Jewish News, Algemeiner Journal, and The Times of Israel.
Comments