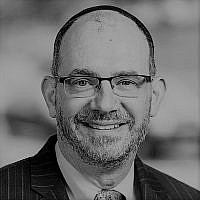 Once again, it’s the time of the Jewish year where rabbis’ thoughts turn to the destruction of Jerusalem, as well as schism within our Orthodox community. A colleague, Rabbi Jonathan Muskat, recently published a blog post where he discusses what he terms “the parameters of preventing schism.” Rabbi Muskat’s blog post is thought provoking yet disappointing, because he largely glosses over the root causes that drive the trend towards schism. I write this article in an attempt to understand and elucidate one of those root causes.

Near the end of the tractate Berkahot in the Mishna (9:3), there is an innocuous enough sounding mishna:

This seems obvious enough that it does not warrant further examination. The mishna discusses prayers which are temporally ineffective: once something has happened, it becomes part of history, and nothing short of a miracle will change it. We are taught not to depend on miracles. Yet, the mishna is troubling: normally parsimonious in its wording, here, the mishna provides not one, but two examples of these ineffective prayers. What, then, is the difference between these two prayers?

I suggest that the second prayer is ineffective not only because it is the wrong timing. It is also ineffective because it turns the focus of the prayer to how my family and I should be safe, even at the expense of some other family’s misfortune. It fails to recognize the tragedy that has befallen some other family. As such, it is a narcissistic prayer, not a supportive one. The prayer lacks empathy.

We live in a society that tends to be strongly narcissistic. We focus on ourselves, often failing to validate the struggles of others. We live in a world largely devoid of empathy. Authors Kelsey Crowe, PhD, and Emily McDowell, in their book There is no Good Card for This, discuss this phenomenon. They assert that failing to empathize with others is an understandable strategy people use to feel safe: Either they refuse to see or name a tragedy, under the mistaken impression that ignoring tragedy confers some sense of safety, or they garner details about what happened to find out how they are different and might be protected (for example, a non-smoker might ask “Lung cancer? Did you smoke?”)

The latter mode is a sophisticated form of “blaming the victim.” Furthermore, it is antithetical to Jewish thought and heretical – it sets us up as masters of our own destiny, and reduces God to some deterministic automaton that will produce the correct results if only given the proper inputs. It is a cruel form of avoda zara – false worship.

Over and over, our tradition teaches us to protect the widow, the orphan, and the proselyte, individuals who are marginalized in our society. We are instructed not to turn our eyes away from them. Our tradition bids us bear witness to all manner of tragedy that strikes in our community and to be present for those people who are affected, regardless of how or why the tragedy has occurred. We are exhorted to empathize with those affected, even when the tragedy is viewed as having occurred as a result of choices they themselves made.

To pray for ourselves and for others, then, we must be vulnerable. We must recognize that tragedy strikes suddenly, unexpectedly, and the fact that one person is “safe” and another person is “affected” is totally in God’s hands. Although God may have some plan, as humans, we will never penetrate that veil in our lives that separates us from God to be able to understand God’s plan. The only part of God’s plan we ought to worry about is empathizing with those who are affected, and providing support and comfort as we are able.

So what does all of this have to do with schism?

Schism is simply a restatement of the inability to tolerate someone being different because we feel threatened by that difference. We focus on our narcissistic impulse to feel safe, blaming the other for schism, rather than owning our own insecurity. Schism talk is a strong indicator of the fundamental insecurity of a movement or institution, since schism talk is often used as a substitute for any meaningful conversation about issues.

Further, schism talk, while promising to keep those who are “faithful” safe, actually does the exact opposite. Those rabbis and lay leaders who engage in schism talk peddle a vision of increasing isolation and existential loneliness to their followers. In truth, adopting a policy of non-exclusion, even though one feels vulnerable and unsafe, is the best way to build supportive and resilient communities in the face of random tragedies that strike communities often unannounced and unexpected.

A poll published earlier this month shows that the growing view in the United States is that clergy are irrelevant. When we make the conversations about our own safety, rather than validating the experience of others and empathizing with them, our congregants and students can sense our priorities. If clergy are increasingly irrelevant, it is because we ourselves make it so by engaging in non-meaningful schism talk. And if that’s the best that we can do, we ought not be surprised at the result.

The traditional prayer book includes a famous Talmudic joke (Berkahot 64a): “Torah scholars increase peace in the world.” Many who recite this passage snicker as they do so. Open up the pages of any major Jewish newspaper, and you’ll read about rabbis engaging in minor, petty, political disagreements. Far from increasing peace, rabbis seem to sow discord.

Dr. Maria Montessori, the founder of an eponymous pedagogical methodology, was also nominated for the Nobel Peace Prize four times in her life. Dr. Montessori wrote, “Preventing conflicts is the work of politics; establishing peace is the work of education.” Of note is that education establishes peace, not reduction or elimination of conflict.

Rabbi Dr. Emanuel Feldman, in his excellent article “Reconciling Opposites,” points out a strong linkage between festival and mourning. Without being able to experience tragedy, one cannot experience true joy, and vice versa.  Both are necessary components of the human experience. Certainly, it might be tempting to live a life devoid of tragedy.  It would, however, be a joyless life.

I believe that such a linkage exists between conflict and peace, and both the Talmudic statement and Dr. Montessori elucidate that linkage. Without conflict, there is not an opportunity to have peace, and vice versa. Conflict is necessary for us to practice living with dissonance in a peaceful way, not reducing or eliminating it.

As rabbis, we have an opportunity to model healthy and supportive ways to engage in conflict. When we make conversations about challenging issues and divisive matters about us and our safety, we only serve to highlight the conflict and widen it. When we make the conversations about hearing and validating the other – whether they be colleague, congregant, friend, or family member – we also bring peace to the world, not by avoiding conflict, but by living with it. Of these sorts of conflicts it can truly be said that they are arguments for the sake of heaven – not for the sake of our own safety.

As I was working on this article, I heard about the recent death of Rabbi Yom Tov (Jerome) Herzog ob”m, the longtime mara d’atra of the community where I lived as a child, a teenager, and a young adult. Rabbi Herzog was a true talmid chakham because he embodied exactly this characteristic of being able to empathize with others, and being able to relate to people both similar to him as well as people who were vastly different, without feeling insecure or compromising his principles. During his tenure, Rabbi Herzog helped a community that had periodic conflict remain at peace, and his presence is sorely missed in today’s world. May God comfort his family, as well as all of us who have suffered this loss, and all who mourn the destruction of Jerusalem on a daily basis.

About the Author
Daniel Geretz grew up in Minneapolis, Minnesota, and is the founding rabbi of Maayan in West Orange, New Jersey. Daniel was awarded semikha by YCT Rabbinical School, and besides continuing to serve as the rabbi of Maayan, he works for the Jewish Federation of Greater Metrowest NJ as a chaplain at Morristown Medical Center in Morristown, New Jersey.
Related Topics
Related Posts
Daniel Geretz
Comments