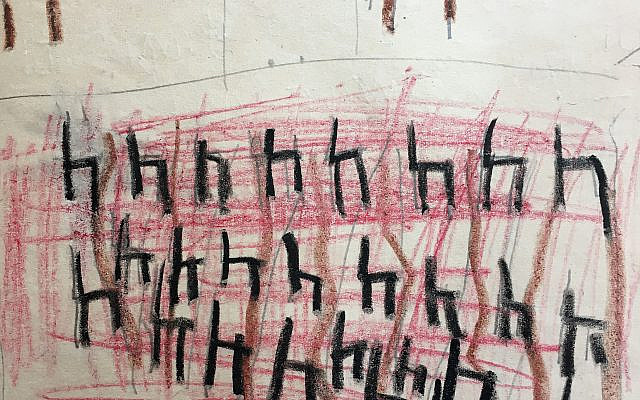 Yom Kippur by Jennifer Moses, circa 1966

My father is 92. The last time I went to visit him, in his home in Washington, DC, he handed me a box filled with what he called “your stuff.” I should have dumped the entire thing in nearest public trash receptacle, but instead I schlepped it home, shoved it under my desk, and pretended it wasn’t there. Then one day when I was bored and internet surfing had failed to deliver its usual cheap thrill, I unearthed it. And here, as I knew it would be, was the record of my childhood that my late mother had carefully curated until she no longer could: 13 years of report cards, various school projects, letters I’d written home from summer camp (which I’d loathed), Mother’s and Father’s Day cards that I’d made with construction paper and crayons, a stapled-together collection of haiku, and photographs of (mainly) me from infancy through my college years. The only thing that was missing from the dreary collection were pressed flowers.

But because I am a glutton for misery, I went through every single last document, including the letter home from the director of the girls’ summer camp in Maine I attended from 1969 through 1973, reporting on my first-summer adjustment. Apparently, I was docile and cooperative, pitching in to do chores in the bunk, but rather hesitant on the playing fields. Hesitant, not so much. What I was, was terrified. I hated sports, probably because I was so bad at them. Also, anything to do with balls or nets bored me into stupefaction. But the letter from the camp director—we called her “Aunt Ruth”—was gentle and, in its own way, accurate. I was docile and cooperative, and I did pitch in when it came to clean-up time. What I didn’t do was everything else, except, as one summer turned to the next, grow an ulcer. That made me kind of special even if my field-hockey moves were somewhat subpar.

Fun times, rooting back there in the detritus of my long-gone childhood, the contents of which I eventually did throw out, except for a few bits and bobs, because: what if one day I desperately need to see evidence of my early literary promise, as demonstrated in the short story “Anne and Netty”? Ones apon a time there were two dolls called Anne and Nutty. They lived in two shoe bockses.  Or how about If I could have three whishes I would like a horse who could fly and also be smart.  My teacher marked this VERY GOOD!!!! which strikes me as somewhat negligent. Then again, given my atrocious spelling—an affliction that has remained with me well into my seventh decade—perhaps she had no reason to challenge my yearning to be smart. As for my third wish, and math skills, both were apparently a moot point.

Sometimes I feel like I’m drowning not only in stuff, but in exactly that stuff that keeps me uncomfortably stuck to the irretrievable (thank God) past. Nope, you can’t do it over again, which is why, I guess, we try to hold onto remnants of it: a lock of hair from baby’s first hair cut, old love letters, pressed flowers, framed b’nai mitzvah certificates. Just to be clear, you wouldn’t guess that I’m drowning in stuff, and that’s because I trend towards neatnik. In general I eventually get rid of the detritus—but how can I, and more to the point, why would I, get rid of Grandma’s lovely dessert plates or the heavy silver bangles that my maternal grandfather bought for my maternal grandmother during a trip to Norway that they took between the wars? Even so, eventually all my stuff, that which I’ve carefully curated and loved as well as that which I’ve simply accumulated, is either going to be homeless or claimed by one of my children or their children if they ever get on it and have them.

And what, I ask you, am I to do with the Green Family Slides, three big boxes of old-fashioned carousel-kept slides recording the various trips my late mother-and-father-in-law took? Here is my mother-in-law, Lola, standing in front of the Great Wall of China, and here she is standing in front of the Eiffel Tower, and again in front of the Western Wall. Surprise: there are more. Lots more. Admittedly, there are several hundred more such slides in which the site is captured sans Lola. Still: really? Already the boxes have been stashed in our basement for four or five years. What would be so wrong if one day, while my husband isn’t looking, I threw them all out?

It’s no secret that since social media and smart phones came into our lives, the whole world seems bent on capturing every moment in a great giant spasm of sharing. (Truth in advertising, I post just about everything I publish on my Facebook page, in an endless and futile hope that this time it will go viral.)  But social media frenzy or no social media frenzy, the conundrum remains: how to honor the past, and those who are now consigned to the past, without drowning in it?

All I know is that l don’t want to drown.