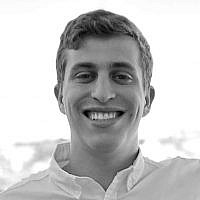 The Blogs
Joshua Shapiro
Apply for a Blog
Advertisement
Please note that the posts on The Blogs are contributed by third parties. The opinions, facts and any media content in them are presented solely by the authors, and neither The Times of Israel nor its partners assume any responsibility for them. Please contact us in case of abuse. In case of abuse,
Report this post.

A friend recently told me that C.S. Lewis’ The Screwtape Letters is the “best type of mussar” (spiritual and ethical cultivation). While that statement sounds a little backward, I couldn’t agree more. The Screwtape Letters, published in 1942, is a compilation of satirical correspondence from one devil named Uncle Screwtape to his nephew, Wormwood. Uncle Screwtape guides his apprenticed nephew with tips on how to deceive his client, a human, and cause him to sin. Reading Lewis’ book, though, was not the first time I encountered such mussar. For the past two years at Yeshivat Orayta, one rabbi annually dressed up like a devil and gave a comedic but powerful mussar schmooze (talk) as the “yetzer hara” (evil inclination). For some reason, the “satanic” mussar schmoozes hit a little deeper than the rest, but why?

Perhaps the “Letters” differentiate themselves by avoiding the potential defects found in some sichot mussar (mussar lectures). Mussar sichot could tend to be unspecific and consist of generic topics such as getting to davening on time and making a “kinyan” (acquisition) on your Torah, leaving you wondering whether you heard the same thing the week prior. Most ironically, everyone sits there saying that “I know this, but I wish everyone else would realize this already!”

Perhaps the “satanic” model takes a different “route” than other sichot. A high school rebbe of mine once told me that the “Satan” usually goes through the “back door” in life, and I did not understand what he meant until I started reading The Screwtape Letters. The trick is as follows: To outsmart the Satan, you have to first learn how he thinks. What does this mean? Throughout the book, Lewis masterfully illustrates a universally shared situation and subtly implores the reader to overcome his initial negative subconscious feeling. For instance, in the first letter, a client was “dangerously” considering religious belief when Uncle Screwtape utilized the following strategy:

I struck instantly at the part of the man which I had best under my control and suggested that it was just about time for lunch.

How many times are we working on a paper or thinking about something important when we tell ourselves that we deserve a “phone break” or another snack? While such a break does have its reasons, Lewis is highlighting the often disingenuous justification and inability to overcome the instantaneous urge.

As we approach Elul, a different letter speaks to me more. In Letter III, Lewis describes the interactions of a “born-again Christian” with his mother soon after his newfound religious commitment. While the entire letter is both comedic and profound, there is one area that I want to focus on during this month of self-reflection. In the message, Uncle Screwtape tasks Wormwood with creating “a good settled habit of mutual annoyance; daily pinpricks” between the “ba’al teshuva” son and his mother. He speaks of the possible weaknesses of the son’s recent increase in religious observance, imploring Wormwood to “keep [the son’s] mind off the elementary duties by directing it to the most advanced and spiritual ones.” Furthermore, Uncle Screwtape keenly suggests the following:

Aggravate the most useful human characteristics, the horror and neglect of the obvious. You must bring him to a condition in which he can practise self-examination for an hour without discovering any of those facts about himself which are perfectly clear to anyone who has ever lived in the same house with him or worked in the same office.

When I read this, I felt like I got hit in the gut by one glaring question. Most discussions of teshuva revolve around areas like tefilah, chazarah (review), and halakhic observance. However, I feel Uncle Screwtape is asking me something very simple but powerful: What are my most obvious flaws? What are the things that anyone else notices in a second but that I, too focused on “bigger and better” things, always seem to miss?

First, Lewis most directly exhorts that one should be conscious of the possible dangers found in religious punctiliousness and not neglect the “obvious things” like how we treat our families. For instance, Lewis would theoretically disapprove of sitting down on the couch to learn Torah on a Friday night while one’s mother is still cleaning the dishes. Alternatively, when rushing out of the house to get to Kabbalat Shabbat, one might be tense and accidentally yell at his parents instead of peacefully wishing them a “Good Shabbos.” One could even interpret Lewis to be saying that sometimes the various stringencies of religious observance might have to take a back seat to family obligations. There are many instances where one must sacrifice a certain ritual in order to maintain Shalom Bayit or respect for his parents. Rav Lichtenstein zt”l once mentioned in an interview that when his children were young, there were “many, many days” he did not daven in a minyan in order to help his wife in the morning. Perhaps there are some things that we too should be more lenient with for the sake of our families.

On a similar note, Uncle Screwtape, in Letter VII, mentions that politics could also blind one of his more important responsibilities in life:

Provided that meetings, pamphlets, policies, movements, causes, and crusades, matter more to him than prayers and sacraments and charity, he is ours – and the more ‘religious’ (on those terms) the more securely ours.

It is not just religious practice that can distract one from the more important things in life. Politics, global movements, and the like can also distract someone from his duties close to home. In other words, everyone has the things they focus on and prioritize, but are we really devoting our time to the things and people that matter most?

Lewis’ emphasis on the “obvious” could also be understood to be talking about how we treat our family in general. In Elul, it is very easy for one to take upon himself new plans to treat his friends better and overall become a nicer person. But how much does this carry over to our family? The cliche about dating could not be more true: “How a man treats his mother is how he will treat you.” Whether someone really internalizes their efforts for character improvement can be determined by observing how he treats his “petty” brothers and sisters and “authoritative” parents. If someone is trying to work on anger, patience, and demeanor, see whether he raises his voice at his brother or sister. When his mother asks him to fold his laundry does he complete the task immediately like he would if a friend asked? Does one thank his children or parents as often as one expresses gratitude to his friends or a cashier? In life there is nothing more in “front of our faces” than our families, and maybe we should all work on exhibiting more patience and effort when it comes to them as well.

It might be very difficult to create harmony with one’s family, especially when it comes to ideological disagreements; however, G.K. Chesterton masterfully depicts the possible benefits of working to improve our relationships and conversations with them:

We are told that we must go in for large empires and large ideas. There is one advantage, however, in the small state, the city, or the village, which only the wilfully blind can overlook. The man who lives in a small community lives in a much larger world. He knows much more of the fierce varieties and uncompromising divergences of men. The reason is obvious. In a large community we can choose our companions. In a small community our companions are chosen for us…There is nothing really narrow about the clan; the thing which is really narrow is the clique. The men of the clan live together because they all wear the same tartan or are all descended from the same sacred cow; but in their souls, by the divine luck of things, there will always be more colours than in any tartan. But the men of the clique live together because they have the same kind of soul, and their narrowness is a narrowness of spiritual coherence and contentment, like that which exists in hell. A big society exists in order to form cliques. A big society is a society for the promotion of narrowness. It is a machinery for the purpose of guarding the solitary and sensitive individual from all experience of the bitter and bracing human compromises. (Heretics [NY, 1975], 62)

It is very easy to surround ourselves with friends who share similar outlooks on life and read things that confirm our own opinions. However, by creating conversations with our families and internalizing the conflicting positions that they have, we are truly living in a much larger and open-minded world than the one encountered by a person who explores the websites of his choice and listens to his like-minded friends.

Finally, another way we can determine our “obvious” flaws is by flipping the question: What are our obvious strengths? As an outspoken person, I enjoy writing and having conversations with different people. Yet, as is true with every character trait, my strong opinions and outspokenness also have their negative manifestations. For example, I often impose my ideals and perspective on others without acknowledging that they might see things differently than me. Alternatively, someone who is very relaxed and loose might exhibit a great sense of humor and optimism. However, she may also struggle with maintaining a serious attitude when demanded. While we should encourage everyone to be themselves and embrace people’s differences, one should regularly contemplate his weaknesses and ponder possible ways to mitigate the negative manifestations of his traits.

Although it can be difficult to internalize mussar and apply it practically, Lewis, through his deep understanding of human nature and the structure he utilizes in the letters, successfully outlines a roadmap for proper edification. This Elul, in addition to focusing on topics that usually get the spotlight like Talmud Torah and Tefilah, perhaps we should also focus on the things that are often overlooked, like family. While in previous years I stuck to famous works like Rav Kook’s Orot Hateshuva or Rambam’s Hilchot Teshuva, this year I will also be studying C.S. Lewis and The Screwtape Letters.

I thank Ariel Kahan and Shuie Berger for their insightful suggestions.

About the Author
Joshua Shapiro is from West Orange, NJ. He recently studied for two years at Yeshivat Orayta in the Old City of Jerusalem. Currently studying at Yeshiva University, Josh is a Straus Scholar, writes for the YU Commentator, and is pursuing a major in English.
Related Topics
Related Posts