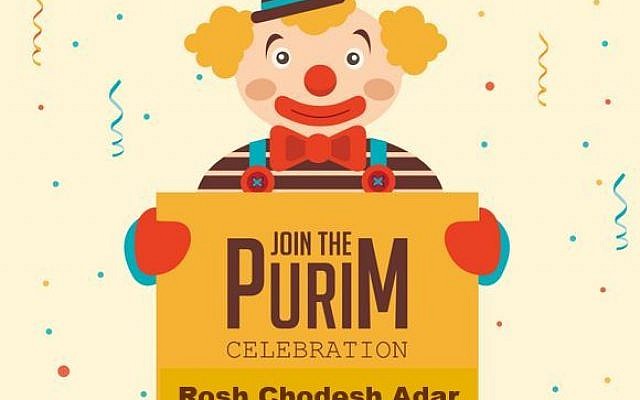 A state of superposition is a physical state unique to quantum theory.  In classical physics (such as Newtonian mechanics or thermodynamics) a physical system is either in one state or the other, say in a state A or a state B. Only in quantum physics a system can be in a blended state C which is a linear superposition of states A and B. For example, the spin of an electron can be either Up or Down.  However, an electron can be in a blurred state of superposition of states Up and Down, which means, the electron has its spin up and down at the same time!  Remember the famous Schrödinger cat that can be alive and dead at the same time? It’s because its physical state is a superposition of two states – alive and dead.  This is quantum mechanics!  But what in the world does it all have to do with the second month of Adar?

Have you ever wondered why there are twelve months in a year, why there are 24 hours in a day? Yes, I know, there are twelve constellations of Zodiac… But those are fairly arbitrary – one can divide the visible night sky in any number of constellations.  So, why twelve?  On a metaphysical level, it is because the proper Name of God – Havayah – has four letters, which is why it is called in Greek Tetragrammaton: י-ה-ו-ה (YHWH).  There are four letters in this Name but only three of them are unique – י (Yud), ה (Heh), and ו (Vav).  The letter ה (Heh) is repeated twice as the second and the fourth letter.  Therefore, there are 12 permutations of these three letters in a four-letter word.  According to the Zohar, each of these permutations represents a particular spiritual “energy” specific to a particular month, which receives its “energy” or its “life-force” and spiritual influence from that permutation.

(It is interesting to note that although the second and the fourth letters of the Tetragrammaton are the same letter ה–Heh, they are not completely the same.  In the wisdom of Kabbalah, while the first ה corresponds to the sephirah of Binah and the World of Creation “Beriah,” the second ה corresponds to the sephirah of Malchut and the world of Action “Assiah.”  If we take these letters to be different, there are 24 possible permutations, each giving its spiritual influence to each hour of the day.  The reason we count these 24 hours as two times 12 is because these two letters ה, albeit from different spiritual worlds, are nevertheless the same letter giving us two sets of twelve permutations.)

In Tehillim-Psalms we find the following verse:

The Midrash asks an obvious question: The Almighty seems to have promised us through the Psalmist that whenever we call upon Him he will answer us – “He shall call upon Me, and I will answer him…”  Yet we often pray but our prayers are not necessarily answered. The Midrash suggests that the key to understanding this is in the previous verse, “…because he hath known My name.”  Most of us not schooled in esoteric wisdom of Kabbalah do not know His name – hence our prayers are not always answered.  What Name is the Midrash referring to?  The Arizal says, it is because we don’t know which permutation of the letters of the Shem Havayah – Tetragrammaton – corresponds to a particular month of the year.  Luckily, the Arizal revealed which of the twelve permutations, called “tzirufei Shem Havayah,” corresponds to which month.  For example, the configuration of the month of Adar is Heh-Heh-Yud-Waw.  Similarly, another Divine name – Shem Ehiyeh spelled א-ה-י-ה (Alef, Heh, Yud, Heh) – also has twelve permutations, each of which exerts spiritual influence on every month.

The Arizal taught that when one recites the middle Berachah of the tefilah of Musaf (additional prayer) on Rosh Hodesh – the blessing that concludes, “Baruch Ata Ado-nai Mekadesh Yisrael Ve’Rosheh Hodashim” – one should have in mind the configurations of Shem Havayah (YHWH) and Shem Ehiyeh (AHYH) that correspond to that month.   The book Bnei Isaschar made this kavanah (intention) very popular and today one can find the table of permutations of the letters of Shem Havayah and Shem Ehiyeh for each month in most Sephardic and Chasidic siddurim (prayer books).

This works well for the twelve months that correspond to the twelve permutations of Shem Havayah and Shem Ehiyeh.  But what are we to do in a ibur (leap) year when there are 13 months?!  Specifically, what kavanah (intention) should one meditate on during the Musaf prayer of the Rosh Chodesh of the Second Adar, such as today?  The answer may surprise you – all of them!  According to the Arizal, the second month of Adar does not have its own permutation (naturally, there are only twelve).  Second Adar is under the influence of all of the permutation of these Divine Names.  In the language of quantum mechanics, we would say that the “spiritual state” of the Second Adar (i.e., the permutations of letters of YHWH and AHYH influencing that month) is in a superposition of all permutations corresponding to the other twelve months. In view of this remarkable quantum quality of the Second Adar, I propose to declare it a Month of Quantum Physics in which we should: