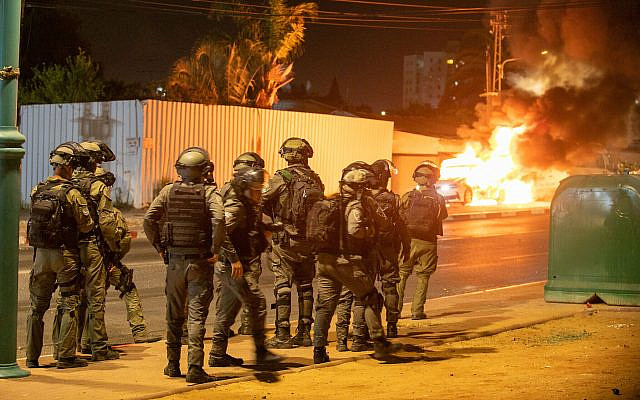 Police are seen in Lod during ethnic rioting in the mixed Jewish-Arab city in central Israel, May 12, 2021. (Yossi Aloni/Flash90)

The ten days between the beginning of the Jewish New Year and Yom Kippur, the Day of Atonement, are a period of individual and, because the personal is also political, of collective self-appraisal and recommitment. During these ten days of awe, extensive efforts are made to reconcile one’s conscience with past actions and to chart a course for future improvement. This year – the twentieth anniversary of the 9/11 attacks on the United States, scarcely two weeks after the US withdrawal from Afghanistan instigated by the events of that fateful day, and in the midst of a manhunt for runaway security prisoners in Israel – this annual process takes on special meaning. The paradigm shift set in motion two decades ago has come full circle. It is ripe for reassessment.

The underlying assumption informing the seismic shift in the wake of the events of September 2001 was the paramountcy of physical security in the face of violent threats originating primarily – albeit hardly exclusively – from religiously motivated non-state actors. The pendulum moved dramatically to what has been termed an all-embracive “war on terror,” catapulting military pursuits against armed extremists to the top of the global agenda.

In retrospect, the heavy-handed manner in which this goal was carried out yielded a pattern of increasingly diminishing returns. The United States poured trillions of dollars first into Afghanistan and then into Iraq and – following the upheavals set in motion by the “Arab spring” in 2011 – additional billions primarily into neighboring hotspots in Asia and the Middle East, but also into parts of Europe and other areas. These investments focused heavily on the development of advanced technological capabilities that gave the mainly western alliance it mobilized a qualitative edge over its local rivals. Ultimately, however, the coalition it mustered fell victim to low-tech militias with deep historical and cultural roots on the ground. Military superiority did not lead to victory.

The lessons learned are striking. First, prolonged occupation, rather than being a harbinger of change, became a growing source of alienation and resentment. Second, efforts to alter long-standing traditions, far from inducing constructive progress, reinforced existing identities and self-isolation. Interference thus blunted the potentially productive effects of involvement; constant meddling gave way to loss of control.

The Israeli experience during this timeframe has not been dissimilar. The shift in late 2000 to a direct assault on the instigators of the Second Intifada, who primarily targeted civilians, was followed a few years later by crafted attacks on rivals across the borders not only in Iraq and Iran, but also in Syria, Lebanon and Gaza. Yet as time has progressed, superior technology has proven incapable of coping with much less sophisticated weapons deeply embedded in civilian settings. Neither the disengagement from Gaza in 2005 nor the effective reoccupation of the West Bank a decade later significantly altered this picture, while institutionalizing discrimination both within Israel and the occupied territories. The key role played by reserve trackers in the apprehension of the runaway security prisoners during this past weekend drives home the centrality of intimate local knowledge over massive technological resources. The position of the present government, which promises no annexation and no negotiations over a Palestinian state, continues to leave the picture of the future in limbo.

All this does not imply that there are no military responses to real and immediate threats. It does, however, suggest that the nature of the reactions to these challenges have a direct bearing on their outcome. In both the general case of the post-9/11 American-led coalition and in the more specific instance of Israeli efforts to control Palestinian lives, the absence of a horizon for hope has had near-devastating effects for all involved.

Indeed, the security paradigm as played out over the past twenty years has exacted an inordinate price throughout because of the intertwining of events in particular areas and the close connection between actions abroad and ripple effects at home. Almost every country touched by foreign activity has undergone state enfeeblement, economic immiseration, humanitarian crisis and widespread demographic displacements. With few exceptions, the entire area from North Africa, the Middle East, Iran and into Central Asia is in a state of much greater distress than it was at the turn of the century.

Liberal democracies, too, have been compromised by clampdowns on civil liberties and invasions of privacy. Economic inequalities have soared and uncertainties have multiplied. Internal disagreements have grown into uncompromising divides. In too many countries solidarity has unraveled in the face of domestic fears, animosities and strife. And the moral compass that has bonded specific societies together has become blurred.

This trend has not bypassed Israelis or Palestinians. The turmoil unleashed in May of this year, beginning in and around Jerusalem and radiating deep into the heart of Israel, left both populations even more battered and suspicious. Palestinian freedom, not to speak of basic human dignity, has, if possible, been further trampled. At the same time, the inclusion of an Arab party in Israel’s new ruling coalition and multiple initiatives to forge a more equitable society have yet to dim ingrained fears. Here, too, the social solidarity of the past has succumbed to a normative indeterminacy. There is much more consensus on what people don’t want than on what they would like to promote.

The price of continuing the assertive militancy of these last two decades has thus become far too costly. That is why President Biden decided to withdraw from Afghanistan (although this operation could have been conducted more prudently). It is also why the Bennett-Lapid government, however equivocally, is groping for alternatives to the legacy inherited from its predecessors (even though the emphasis on economic amelioration by no means serves as a substitute for political aspirations). These leaders have been informed by the events of the past year: the COVID-19 pandemic and the frightening effects of global warming, coupled with immense economic uncertainties and social and gender inequalities – all traversing national boundaries and radiating throughout the globe.

However slowly, there is a growing realization that the broadening gap between interests and principles can no longer be sustained. Compromising guiding norms on the altar of immediate interests ultimately undermines the capacity to achieve these very interests. Today’s policymakers, many of whom have come into office only recently, therefore find themselves in a position in which they have to come to terms with two major challenges. The first is the necessity of redefining security to also incorporate its economic, social, environmental, cultural and political components. The second is the need to adapt to the collapse of the post-World War II order and to replace it with a model attuned to contemporary exigencies and realities.

These quandaries, brewing for quite some time, have now come to a head. Although they cannot and will not be resolved overnight, some of their main elements are evident. These include an understanding that the foundations for a global reordering require a combination of inclusion along with respect for diversity and autonomy. They also involve multi-polarity alongside greater mutual responsibility. And they must bring together individual and collective concerns in creative and innovative ways. This is no small charge. But unless attempts are made to grapple with its many manifestations, the chances of survival with dignity will diminish even further.

During the traditional introspection of these High Holidays, addressing some of these questions is a personal as well as a joint obligation. Responsibility for meeting these challenges lies in the hands of every one of us; together we can remake a community worth living in and a future that mirrors our faith in the human spirit. This is what these days of reflection are all about.