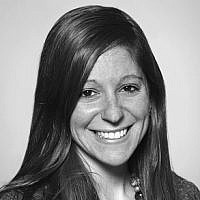 The Blogs
Erin Beser
Apply for a Blog
Please note that the posts on The Blogs are contributed by third parties. The opinions, facts and any media content in them are presented solely by the authors, and neither The Times of Israel nor its partners assume any responsibility for them. Please contact us in case of abuse. In case of abuse,
Report this post.

With Passover fast approaching, as a Jewish professional, I go into overdrive preparing packets and source sheets and giving multiple sessions for parents of young kids to help them engage their offspring and familial relations at the seder. I have scoured the Jewish blogosphere and Pinterest and Facebook and Twitter to collect the most creative, the most exciting versions of Plague bags and lego projects and sticker games to hand over with a secure sense of satisfaction to the members of my congregation. Yes, this year they will feel prepared, armed with tools and brimming with questions and strategies to bring everyone around the table, even the most hostile seder guest.

But this year, though I presented compelling texts with stimulating debates and subject matter, all anyone wanted to talk about was how much seders sometimes suck. And even though, I was all fired up to help them understand matzah as a metaphor for the “evil inclination”, I had to set that aside and really listen.

Why do seders sometimes suck? Mothers in the Nursery School class that I teach on Friday mornings wanted to tell me how challenging it is to be a homemaker, but also the spiritual center of your family. How your in-laws or cousins couldn’t care less about whether the seder happened or not, how your husband works long hours and comes home to help at the last minute when most things are already completed, how your kids go bonkers after the first page of the Haggadah is turned, no matter how many tools or tips from Pinterest you throw at them.

These are serious Jews struggling with new American realities of blended families, different religious affiliations, gender roles, background, intermarriage, parenting woes and more – all on this night at the Passover Seder. We could really ask, mah nishtana ha laila ha-zeh? What separates this night from all the other nights we confront the shifting chasms of what it means to be an American Jew.

I didn’t have a solution for these women, but I was pretty sure it wasn’t in my pre-prepared packet of seder tips for young kids. In fact, everywhere I looked hardly anyone seemed to be talking about WHY planning seders bring up everything that’s already hard about having a Jewish family and how to tackle the real frustrations behind the surface level ones. I think perhaps the philosophic underpinning of much distress comes from the unavoidable, but no less unpleasant, experience of growing up.

I don’t have a lot of experience growing up yet, as a 21st century newly-married, millennial. However, I can tell you so far the lessons that marriage has brought to my life: lots and lots of compromise. Marriage is like moving to another country where all the cultural norms and social formalities you took for granted as normal, no longer apply. After a few months (or years) of tug of war between what is weird, crazy and generally agreed upon as “normal”, you hopefully settle into a new reality where both parties feel comfortable and represented. Letting go of expectations and binaries help you get there much faster. So does listening and suspending judgment and therapy. Lots of therapy.

So of course Passover, like New Years Eve, crammed full of a years (and lifetimes) worth of Jewish expectations will often disappoint. It’s hard to create a “new normal” of Passover between many parties even within one family, especially if this version of the family only gathers once a year. Letting go of what was “normal”: the tune for that special song, the way we either read or don’t read every word of the Haggadah, the tastes of particular dishes from Bubby’s kitchen, is part of remaking Passover for the next generation. It’s part of growing up.

As a kid, Passover arrives magically each year. The innerworkings of the seder have a mystical flow to them: things done one year become rituals and then rituals become deeply ingrained in our total association with Jewish tradition. If we don’t do certain things, it’s like it’s not even Passover. Even if growing up you were privileged enough to be partners with your parents in leading the seder or getting enlisted in Mom’s army of cleaners, you were still a lieutenant, not the general. And being the general has a whole new world of responsibility, burden, and obligation. You become engaged in the sacred task of making Jewish memories, no longer the passive recipient.

Like a marriage, family gatherings require lots of listening and lots of compromise. We might not get it exactly right, but part of the beauty of Jewish tradition is that it stretches and molds to fit our new realities. Our rabbis taught us in the Babylonian Talmud Pesachim 109a, “The mitzvah of drinking the four cups of wine is upon all alike–men, women, and even children.” Rabbi Yehudah, however, said:

What benefit would children derive from wine? They should be given nuts, parched corn, etc. instead, on the eve of Passover, so as to keep them awake at night, and that may make them inquire into the reason of the festivity.

I learn from this text that sometimes our own interpretations of seder rituals don’t work. Sometimes the traditions from our childhood do not fit our new realities, our new family structures, our new relationships. We have to ask ourselves, what benefit do these traditions serve? How can we keep the value of the holiday, the importance of the traditions, while making critical (yet from the text in the Talmud it would seem sanctioned) adjustments to suit the needs of all our guests?

Once we can let go of the seders from our childhood that no longer exist and cannot be relived and recreated no matter how hard we try, what opportunities can we open up to invent new rituals, to induct new members into our secret society of Jews, to blend new traditions from new faces and make everyone feel a part of something very, very special? Because we were slaves in Egypt, and God took us out with an outstretched hand and now we are free. All the rest is just commentary.

About the Author
Erin Beser served as the Rosh Ruah - the Director of Experiential Education at the Solomon Schechter School of Westchester in Hartsdale, NY. She spent 3 years working for the Jewish communities of Bombay, India and Izmir, Turkey through the Joint Distribution Committee. She received a masters in Hebrew Culture from Tel Aviv University and an education certificate from the Shalom Hartman Institute in Jerusalem. She loves lattes, traveling, and playing the ukulele.
Related Topics
Related Posts
Comments