The Blogs
Renee Garfinkel
Apply for a Blog
Please note that the posts on The Blogs are contributed by third parties. The opinions, facts and any media content in them are presented solely by the authors, and neither The Times of Israel nor its partners assume any responsibility for them. Please contact us in case of abuse. In case of abuse,
Report this post. 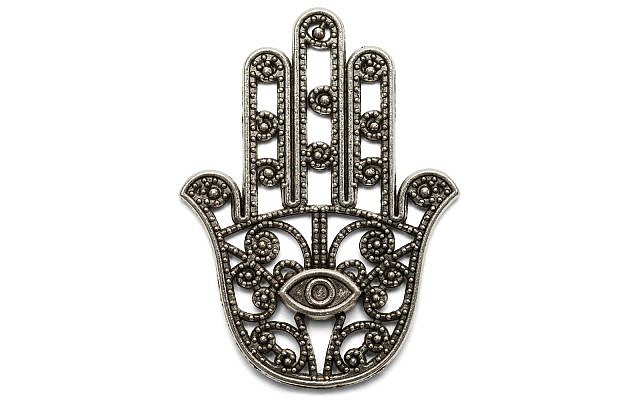 From our very first moments, we live in someone’s gaze.

The mother-infant love gaze lets us know we exist and we’re connected. Much later we will gaze into our lover’s eyes and experience the magic of being seen…being deeply known…and being loved.

But being seen as we are is also threatening. Revealed and vulnerable, we tremble before the gaze…especially the gaze of the One who sees all.

The Museum for Islamic Art in Jerusalem takes up the history and power of the gaze in its current exhibit, “Khamsa, Khamsa, Khamsa: The Evolution of a Motif in Contemporary Israeli Art.”

Eyes are incorporated in religious art and architecture, from Buddhist temples to the “eye of God” (aka, “eye of Providence”), the familiar image of an eye inside of a triangle, associated with the Masons, that symbolizes the omnipresence and omniscience of God, who watches over all things. The Eye of Providence is also on the back of the dollar bill.

The power of the gaze is demonstrated in what is perhaps the most famous social psychological experiment. It took place in a university psychology department coffee room, run on the honor system. People were asked to pay for the coffee they drank by putting change in a can. A price list was posted on the wall. When the price list was topped by a photo of eyes rather than flowers staff paid nearly 3 times as much for their coffee!

The gaze loves. The gaze judges.

Which brings us to the evil eye – the power of looking, seeing, and judging in a way that causes harm. Whether it is the fundamental evil of Satan that might be aroused, or your neighbor’s jealousy – the notion that good fortune must be protected against the evil eye is widespread in the Middle East and Europe, in Muslim, Christian and Jewish folk traditions.

The Khamsa is an amulet designed to protect against the evil eye. “Khamsa” comes from the Arabic word for the number five. It is an image of an open hand with an eye in the middle, believed to ward off the evil eye.

The exhibit is a delight to see, with Hamsas of every imaginable design.

The most ominous Khamsa in the exhibit is the surveillance Khamsa. Modern and industrial-looking, this Hamsa’s eye is a camera. The artist reminds us that in our world seeing eyes are everywhere, and not just the spiritual kind. 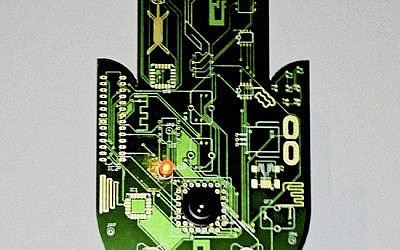