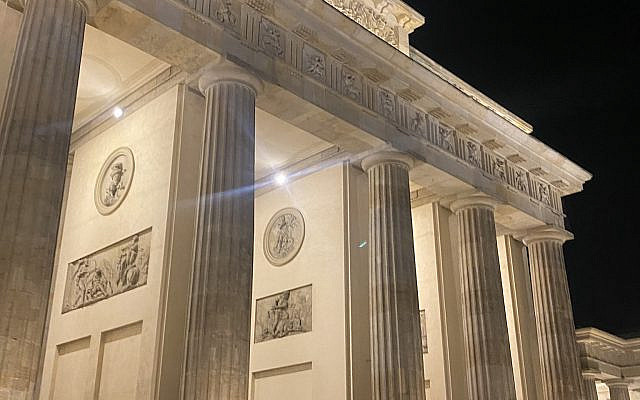 Berlin, the constantly evolving German capital, has been the epicenter of notable events in history and continues to be shaped by their remnants. Even though it is rapidly expanding with its population, diversity and multiculturalism, countless landmarks bear witness to incidents from the past, such as the Holocaust and the Cold War. Having been here twice before finally moving, Berlin invariably stood out to me as the place to be in Europe. Career prospects, the ease of travel, cosmopolitanism and “German efficiency” allured me for years. But now that I am based here as an expat, what captivates most about Berlin is its historical baggage and the drive to take accountability for the country’s stained past while being the focal point for decision-making on several German and European affairs of utmost significance.

A multifaceted history is the very fabric of Berlin given how much this city has seen; it was under the rule of the Kingdom Of Prussia as the capital, the German Empire, the Weimar Republic, and the Third Reich. It then became the face of the Iron Curtain and the ideological clash of the Cold War to a great degree. After WWII, the city was famously split in half with the construction of the 144 kilometer Berlin Wall, which was only taken down in 1989. Today, the few remaining segments of the wall are unquestionably one of the most visited.

The East and the West split somehow still rings true here. Unambiguous references like “I am based on the East side of Berlin” or “I go to work in the West part of the city”  from those located here, signaled to me the prevalence of that divide. The perspectives of locals in the former West and East on more social and political matters —such as the outlook on the EU and the rightwing parties — also still differ in significant ways, as backed by a 2019 study by Pew Research Center. The study revealed that those in the former East Germany held more negative views towards certain minority groups than people in the former West, among other things. 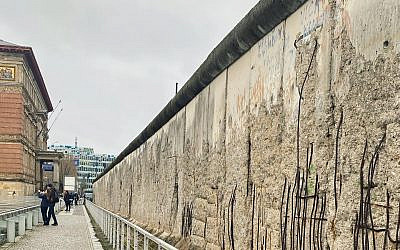 Concrete blocks of various sizes near the Brandenburg Gate, Berlin’s most recognized landmark, constitute the Memorial to the Murdered Jews of Europe. Dedicated to the Jewish victims of the Second World War, the memorial comprising almost 2,700 rectangle slabs stands out in Mitte, the very central part of the capital. A visit to the memorial served as a somber reminder of a darker, bloodstained past to me and reflected how deeply and regretfully ingrained it is in German minds.

Another predominant mark of Berlin’s eventful Jewish life that catches the eye is the New Synagogue. Architecturally appealing and built in 1866, it is one of the notable Jewish landmarks in the German capital, indicating a long-lasting Jewish presence. Some statistics reveal that 50 Jewish families came to Berlin and formed the first community here in 1671 and then, in the 1920s, around 170,000 Jewish citizens lived and worked here.

More so, Berlin’s Jewish community comprised over 32 percent of all Jews of Germany and was the largest. After 1933, however, the Jews of Berlin faced persecution and racism and the circumstances forced many members of the community to flee. An excerpt from the Holocaust Encyclopedia further states that with Jewish stores and businesses being boycotted in April of 1933, most Jewish civil servants and professionals were also fired. It was the beginning of an endless tale of suffering for the community, leading to steps like the Nuremberg Laws and more discriminatory treatment.

Berlin’s Barn Quarter or Scheunenviertel also has a Jewish connection and was once a Jewish area. Some of its remnants, though not in their original forms, include an old cemetery and the New Synagogue itself, which was rebuilt in the 1990s. The Jewish essence is mysteriously felt in the air of this city, be it through the stumbling stones, the memorial or the exhibitions and history hits different in Berlin. 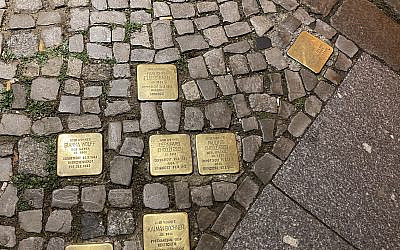 ‘The capital of cool’

For many, the German capital also has the reputation of being a hub of scientific, artistic and philosophical developments. And then there’s a creative, contemporary, hipster vibe to it, especially in the Kreuzberg neighborhood, that has landed the city terms like “the capital of cool” and “artistic city full of hipster cafes.”

But Berlin, for me, has the best of both worlds. A fast-paced, systematized life with the intricacies of any big modern city and a suburban, historical charm that carries a lot of substance and repentance. When compared with other cities I have lived in — from charmingly chaotic Karachi to calm and tranquil Aarhus and exquisite Prague — Berlin seems to have a strange balance of encompassing it all and staying relevant as ever. Even in its grey and largely depressing winter, it brims with volumes of history, heritage and hipster culture. Das ist Berlin…

About the Author
The writer is a journalist from Pakistan, mostly covering social issues and women's rights, and an Erasmus Mundus scholar currently based in Prague.
Related Topics
Related Posts
Allia Bukhari