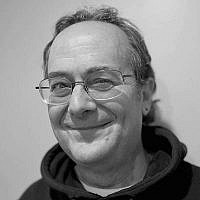 I’ve been fortunate to spend the Yamim Nora’im in a couple of lovely seaside settings.

For 12 years I led Yamim Nora’im at United Brothers Synagogue in Bristol RI (RI’s 2nd-oldest synagogue). Bristol is your typical New England whaling town, with a quaint main street and captains’ mansions along the harbor. (It was also a significant slave trade town.) Even today it hosts companies that deal in high-end competitive sailing (Newport is not far away.) There’s a strong connection to the sea and sailing.

One innovation I brought to United Brothers was a Yom Kippur afternoon study session. Sometimes our session was as simple as reading the Book of Jonah in translation and discussing it.

People from an area with a sailing culture related to the sailing aspect of the story, and we thought about those other people on Jonah’s ship. We developed a liking for these poor guys who set out for a standard trip and then find themselves in what our Japanese friends call a kami-kaze, a Divine wind (equivalent to “typhoon.”)

We see that the sailors on Jonah’s ship follow a code. When the storm arises, even after determining (by random chance) that it is because of Jonah, and even when Jonah himself recommends throwing him overboard, they keep trying to row and control the boat. They care about their fellow traveler. Only as a last resort do they throw Jonah overboard.

The sailors “cast lots” to determine whose fault the storm is. (“lots” – goralot; how do you say that in borrowed ancient Farsi? Purim. Another connection between the two holidays.) Nobody assumes that they are blameless. These are sailors in the ancient world. They are not the clean-cut nicely uniformed people of modern navies and cruise ships. Some may have been regular crew members of this captain, basic decent guys, others just hired that day out of the hangouts of ancient Yaffo for this generally routine trip. But every person on this ship knows that they deserve punishment for something:

Last year, I assisted in Yamim Nora’im services at Temple Beth Sholom in the seaside town of Hull MA. Hull is home to the very fun Nantasket Beach and its famous carousel, and Hull had such a significant summer and year-round Jewish population that it was known as “The Jewish Riviera.” Rabbi David Grossman, the mara de-atra, offered me the opportunity to teach during the Yom Kippur afternoon break, and I decided to check in with the sailors again, and I imagined an interaction one had before signing on for the fateful trip.

I introduced the congregation to the Grateful Dead song “Wharf Rat” (music by Jerry Garcia, lyrics by Robert Hunter.) The song describes a person who has reached the bottom of life and is seeking t’shuva, and our seeker of t’shuva could be one of Jonah’s sailors.

The song opens with the singer setting the scene:

way down, down, down by the docks of the city,
Blind and dirty
asked me for a dime–a dime for a cup of coffee
I got no dime but I got some time to hear his story:

The singer encounters a very unfortunate character down at the wharf. The wharf setting gives us our nautical connection to Jonah. And what does “down” mean here? “Down” is where the docks seem to have always been – Jonah 1:3, וַיֵּ֨רֶד יָפ֜וֹ “And he (Jonah) went down to Yaffo.”

Is the old man also “down” – financially, emotionally, spiritually, and physically? And we hear that the singer is in no better financial shape than the old man.

August states upfront and repeats that he loves Pearly more than his wine – an important hint. And August rejects Gd. What could have brought that on? Some have commented on August’s name: August is the end of summer, the end of the year approaches. August seems past some of the better parts of his life. And the sun sets in – the West. A name symbolizing ending.

Everyone said
I’d come to no good. I knew I would
Pearly believed them

August has expressed his great love for Pearly, but was the feeling mutual? August says she believed those who said he would come to no good. What does that say about how Pearly feels about August? Does it seem her concerns were borne out?

These lines show us August’s reality. August claims he was unfairly jailed for crimes committed by others. Addicts (and others) blame often others for trouble they get into. Then, August admits to alcoholism. From a t’shuva standpoint, this echoes first step of the 12-Step model – We admitted we were powerless over alcohol—that our lives had become unmanageable.

August proclaims that he has the capacity to improve his situation. He even calls upon Ha-Shem’s will and Providence, the same Gd he rejected just a few lines ago. Returning to Gd in t’shuva mirrors the second of the 12 Steps – We came to believe that a Power greater than ourselves could restore us to sanity.

The first two lines here are the essence of t’shuva. August confesses that he has wrecked his own life.

As for flying away, it may be a reference the hymn I’ll Fly Away. Is flying away helpful in t’shuva? Shouldn’t we should return to the difficult situation and do better? Maybe August will fly away to a better life. Maybe his soul will fly to a new place after t’shuva.

By the way, August’s struggle with alcoholism made this song’s title the name of the sub-group of Deadheads who are in recovery, the Wharf Rats. At a Dead show, where temptations are all around, you will find a yellow balloon someplace. That is where the Wharf Rats will gather.

After his confessional, August continues:

August expresses hope. Once he turns his life around, he’ll be able to get back to Pearly, who has certainly loved nobody else while he has been down on his luck down on the docks.

The singer reassures August that of course Pearly has loved nobody else. Does the singer believe this? Or is this an act of compassion to be supportive and empathetic? How heartless to force August to face reality if expressed by a stranger – he’s drunk and broke, and has been, and even if he can turn his life around, Pearly has probably moved on. For now, the singer gives August a reason to hope and turn his life around. We need to show compassion when people attempt t’shuva. It can be difficult, and it may not be possible sometimes. It’s something to keep in mind.

The singer moves on from his conversation with August West. He reminds us that he also has no direction in life. He also sheds light on his own situation. When the singer reassured August of Pearly’s love, maybe he was sincere, since he expresses his own faith that his own lover, Bonny, has been true to him. This is the thought he takes away from his time with August. Clearly this is his hope. Maybe he’s going to think about his own t’shuva.

But it raises more questions:

The singer leaves the docks – he heads “downtown”. I like to imagine that he ends up at the port of Yaffo again. To pick up a few dinars he signs on as crew for one boat’s regular Tarshish run. Except one of the passengers is our friend the prophet Yonah ben-Amitai. When the Divine storm hits, and the sailors are praying for salvation, our wharf rat is praying that he can see Bonny Lee again.

Any of us might need to wander around until the encounter that will bring us to t’shuva, but we can keep our eyes, ears, and hearts open for those angels around us that can open us to t’shuva.

The Grateful Dead did not record a studio version of “Wharf Rat.” It was first performed live on February 18, 1971, at the Capitol Theater in Port Chester, NY. It was very popular in the repertoire; they played it 393 times in concert. Here’s a very good performance from 1979:

About the Author
Scott A. Tepper (Him etc., a/k/a Reb Zisha) has been a ba’al tefilla and teacher in Boston's Jewish community and beyond for decades. Scott has a BA in Near Eastern and Judaic Studies from Brandeis University and an Ed.M. from the Harvard Graduate School of Education. He created and teaches the webinar “Grateful Jews – Exploring Jewish Connections to the World of the Grateful Dead” and is a member of the Grateful Dead Studies Association. His first Grateful Dead concert was May 7, 1977 at the original Boston Garden. Scott's primary career has been in applications and software training.
Related Topics
Related Posts