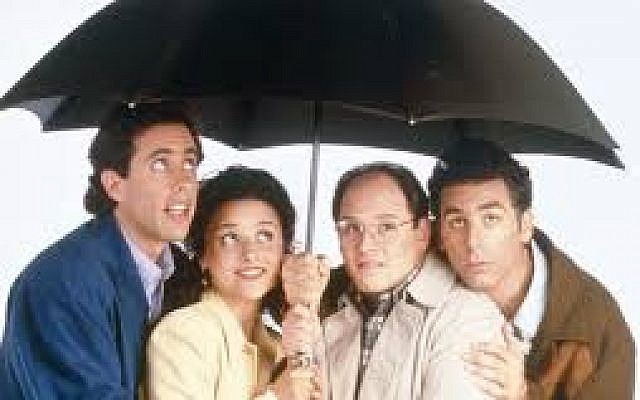 Reform Judaism blogger Robert Schurz describes himself as having grown up a Seinfield Jew:

“Growing up, my family was proudly, secularly Jewish. We worshiped and revered our cultural achievements, if skimping a little bit on the religious ones – our heroes were Adam Sandler, not Aaron; Larry David, not Leah; Saul Bellow, not Saul. We were Seinfeld Jews, not Solomon Jews.

Sure, we got presents for Hanukkah, read the Haggadah at Passover, and broke the fast on Yom Kippur, but our Judaism was more grounded in a worldly set of values, a strong sense of our history, and a genuine pride in the artistic, literary, scientific, and political contributions of Jews all over the world.”

After the birth of his first child, Schurz came to the conclusion that

Our current politics are so riven with division, and the highest offices of our government are occupied by people who make membership in ethnic or religious minority groups a cause for dehumanization, exclusion, and even expulsion – and I have never been more conscious of my membership in a group that has had to struggle and fight for its very right to exist.

The need for tikkun olam, repairing the world and leaving it better than we found it, has never been more urgent. I see it as my duty to instill these ideals in my daughter, and I find myself hungry for a Jewish community in which we can share our dedication to them.

Robert Schurz, his wife, Dana, and the synagogue they chose to affiliate with (Temple Shaarey Tefila on Manhattan’s Upper East Side), are nothing if not examples of what so-called Progressive Judaism has become.

As the High Holidays approach, it seems fair to ask whether that is what non-Orthodox Jewry in America should aspire to?

All indications are that Jews such as Schurz are who Melanie Phillips had in mind recently when she wrote (http://www.melaniephillips.com/judaism-orwellian-hijack-tikkun-olam/) about the Orwellian hijack of Judaism by Progressives.

In America, the Jewish community has a big problem with galloping assimilation, intermarriage and the steady abandonment of Judaism by its children. This much is also now all too obvious.

What’s less appreciated is the extent to which the two are symbiotically linked, and the disturbing implications of how that link works.

She quotes another to maintain that

American Jews have been led to believe that “the purpose of the Jews in the world is to campaign for higher taxes, sexual permissiveness, reduced military spending, illegal immigration, opposition to fracking, the banishment of religion from the public square and every other liberal cause under the sun – all in the name of God”.

…“Isn’t it just a little bit incredible for the teachings of the ancient faith of Judaism to happen to comprise without exception the agenda of the liberal wing of today’s Democratic Party?”

liberalism has itself mutated into its own antithesis. Far from enshrining personal morality, it has been hijacked by Marxism which stands for the absolute negation of morality – a transformation which, in suitably Orwellian manner, liberals now call “social justice.”

There is thus an absolute head-on confrontation between Judaism and Marxist “social justice.” And so, in order to resolve this crisis, American Jews for whom secular liberalism is their real religion have branded social justice tikkun olam – and thus rebranded Marxism as Judaism.”

“…But by and large, most Jews vote leftist because they are upper middle class agnostics with above-average levels of post-graduate education who believe that religion is a great ill, that Biblical morality is intolerant and vicious, and that Judaism itself is passé.

Organized Reform Judaism agrees with the importance of liberal activism to its raison d’etre.

Batya Unger-Sargon,  opinion editor at The Jewish Forward, maintains that it isn’t even important for there to be a non-Orthodox Jewish religion.  She wrote

Liberal Jews bemoan the fact that many in their ranks are marrying non-Jews, and that their grandchildren may not identify as Jews. In fact, blessedly freed of the anti-Semitism that ostracized us, what liberal Jews are really worried about is the fact that their children will choose not to identify as Jews. This does not mean that Jewish continuity is under threat; thanks to the Orthodox and the Hassidic, it’s a foregone conclusion.Read more: https://forward.com/opinion/382679/how-the-obsession-with-jewish-continuity-perverts-our-liberal-values/

It is not religious Judaism that Schurz describes as he and Dana settle on a synagogue to join.

They meet with its rabbi and are so pleased for him

“to hear our ideas for how best to introduce Emma to our vision of Judaism. In speaking with him, we saw that he shared that vision, had a deep passion for his work, and was dedicated to making Shaaray Tefila a focal point of progressive Jewish values.”

Missing from Robert Schurz’s statement about “How Becoming a Parent Spurred (His) Own Jewish Awakening” is any sense of membership in, or obligation to, the Jewish people.

If Schurz grew up (in his own words) as a Seinfeld Jew, what sort of Jew does it appear his daughter will be?  If a Jew at all?