Recently, there has been a chorus of righteous indignation from the Trump administration, the Beltway establishment, and main stream media condemning the Syrian government for an alleged chemical attack that killed 85 civilians, and the unanimous glorification of “beautiful” cruise missiles that rained down on Syrian government forces on April 6 as punishment for crossing US red lines.

Barely a week later, on April 13, US Congress is reviewing yet another new arms package to Saudi Arabia to continue its indiscriminate bombing campaign in Yemen. Now into its third year, this “moral abomination” as described by some US lawmakers, has killed over 10,000 people, displaced 3 million, and condemned 19 million people—80% of the population—to famine and starvation.  Yet there is nary a mention by the Beltway establishment or media.

Sadly, this type of selective humanity and weaponizing human rights—highlighting cases only when it suits one’s political agenda while cynically dismissing others when they don’t—seems to have been a part of US foreign policy for the past 70 years.

And one case that has been whitewashed in history is the US bombing campaign of Taiwan in 1945.

In the morning of May 31, 1945, at about 10 am, US sent 117 B-24 Liberator heavy bombers in a carpet bombing campaign of Taipei, known then as Taihouku under Japanese control.  For the next four hours, from 10 am to about 1 pm, American planes unleashed some 3,800 bombs on the city, killing an estimated 3,000 and wounding and displacing more than 10,000 civilians. 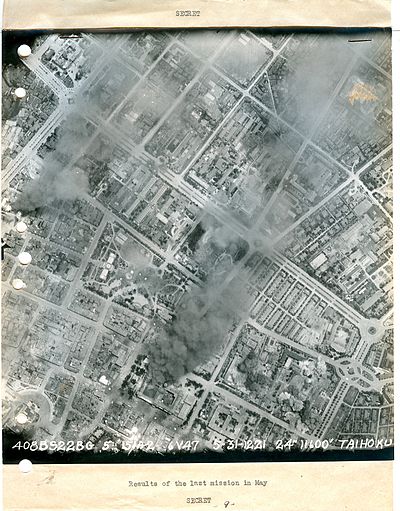 As described by eyewitness Chen Wan-yi, starting from late 1944, US planes—usually 20 or 30 at a time—would fly by twice a day.  But something was different on the morning of May 31, 1945, when “the entire sky had turned white” with hundreds of B-24 bombers that had arrived to wreak havoc on Taipei.

The Americans met virtually no resistance form the Japanese due to attrition of the Japanese air forces in the Aerial Battle of Taiwan-Okinawa.  However, despite efforts to avoid civilian casualties, many civilian installations were bombed including Taihoku Prefectural Taihoku First Girls’ High School, Huashan Catholic Church of Taihoku, and the Lungshan Temple of Manka. 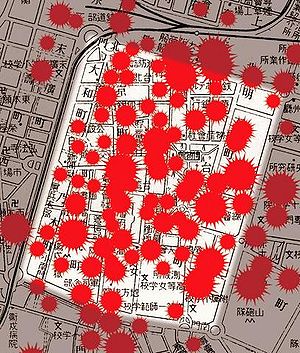 Location of bomb landed during the air raid, Wikimedia Commons

Although the estimated death toll of 3,000 was small compared to the hundreds of thousands of Japanese killed when Tokyo was firebombed and atomic bombs were dropped on Hiroshima and Nagasaki, it was a traumatic event for Taiwan—which then Adm. Chester Nimitz, commander-in-chief of the United States Pacific Fleet, described in his diary as a day that “achieved good destruction.”

Known later as the Taipei Air Raid, somehow this dark chapter of US-Taiwan relation was swept under the carpet. Due to its pro-American political stance after World War II, the newly installed Kuomintang (KMT) regime in Taiwan toned down the US attack and deleted it from media and history books.

Not until recent decades has this event returned to public consciousness, with the first book pertaining to the Raid published in 2007 by the Taipei City Governments’ Department of Cultural Affairs, to accompany an exhibition at the 228 Memorial Museum—another dark chapter in US-Taiwan relation that was whitewashed for a long time.

It is little known that prior to the 2011 Arab uprising, unleashed by the Tunisian street vendor who immolated himself in protest against systemic humiliation and abuse by the government, Taiwan had its own uprising in 1945.  On February 27, when agents from the KMT’s Tobacco Monopoly Bureau confiscated a cigarette vendor’s illegal cigarettes, money, then beat her over the head with a pistol, a large group of people swarmed the agents, prompting one to open fire at the crowd. The incident led to mass protests the next day—February 28.

Thus 228 became an uprising of the Taiwanese people against the US-sponsored KMT dictatorship (Martial law finally lifted in 1987) that took over the island in 1945, and resulted in the slaughter of between 18,000 to 28,000 civilians. Without social media to expose the truth back then, the incident was quickly hushed and swept under the rug until two decades later.  In 1965 George Kerr—a US diplomatic officer in Taiwan that witnessed the 228 massacre—finally published Formosa Betrayed in a damning exposé of Washington’s abandonment of the Taiwanese people, in order to prop up its proxy KMT regime against the Chinese Communists.

Unfortunately, this has a deleterious effect on eroding and delegitimizing human rights norms. Yemeni children and civilians are dehumanized and invisible in US public consciousness as Washington pursues lucrative arms deals with Saudi Arabia, while Syrian children in al Qaeda-laced rebel stronghold are “beautiful babies” worthy of US protection.  Human lives no longer have intrinsic value, but are measured by cost/benefit calculus to push Western agenda.

It is no wonder that Yemenis now see the US, not just Saudis, as their enemy. In Taiwan, contrary to the Western narrative, many of the civilian population at that time did not see America as the liberator but rather “we believed that they were the bad guys.”  Indeed, sending hundreds of “Liberator” planes to drop thousands of “freedom” bombs was probably unlikely to endear Washington to any civilian population in Taiwan. Nor would democracy-promoting bombing campaigns endear US to civilians in Iraq, Yemen or Afghanistan.