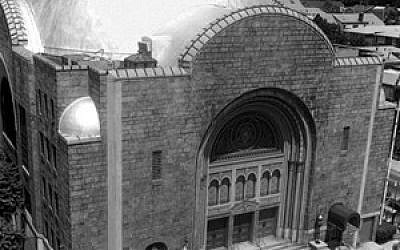 It was the year after my paternal grandmother had immigrated to America. She was a survivor of many wars, including both World Wars.

I called her “Babba”.

She was my only living grandparent. My mother’s parents had died in Auschwitz.
My paternal grandfather had died when I was four.

It was unnecessary for my parents to discuss his death as I remembered his passing. My father had stood side by side with other men, their tallises draped on their shoulders, in our Williamsburg, Brooklyn apartment.

So, when my grandmother I arrived I was filled with daydreams about having a grandparent.
I was to be disappointed.

She did not speak English and my Yiddish had faded.

I so wanted to communicate with her, tell her about school, the books I was reading, ask her about her life before the war, all the things I could never share with my own busy parents.
My father had told me that in Poland she had been a fierce, witty woman.

He said that had been tall, with waist length blonde hair and green eyes and was well educated and spoke Polish, German, Hebrew and Russian.

She learned shirt making and earned her own money. One year she traveled alone to Vienna in order to rent a hotel room overlooking the funeral procession of the Austrian-Hungarian Emperor Franz Josef.

She had been fearless. When her younger brother faced the Polish draft, she dressed him as a woman and took him across the border to Germany.

She was a legend in our family.

But by the time she arrived in America, a widow, something had happened.

She was exceedingly quiet and withdrawn.

I tried to spend time with her.

But I, too, was burdened with schoolwork, piano lessons, ballet lessons and Girl Scouts.Borough Park, where we lived, was predominantly Jewish.

My family lived across the street from one of the most celebrated synagogues in New York, Temple Beth-El. It had a timeless, classical grandeur that made it unique among religious structures. The cantor was the world famous Moshe Koussevitsky.

That year, my grandmother and I found ourselves, at midnight services, a few days before Rosh Hashonah.

For some reason no other member of our substantial survivor family who also lived in Borough Park, in fact in the same building, was present.

We sat in the front row of the balcony.

I watched her as she followed the prayers and listened to the plaintive, heartbreaking voice of Moshe Koussevitsky.

I placed my cheek against the cold brass railing.

The weary folds of her drawn face seemed to soften. Her eyes grew larger. She saw me looking at her and she smiled.

Now, years later, I wonder if she was not back in the wooden schul of Ulanow, Poland with its painted ceiling of biblical scenes, looking at her handsome sons and beautiful daughters, seeing her Kohain husband being honored with an aliya.

My grandmother had been witness to history, a history which had flicked its Leviathan tail at her, her family and all of European Jewry.

But then, at midnight, in Temple Beth-El, in Borough Park, Brooklyn, she sat safely, at peace as her spirit was transported to a universal union of faith and memory.