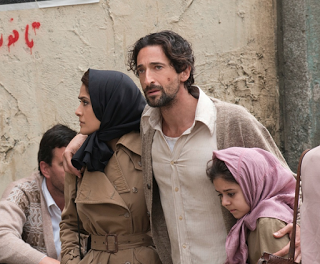 You might have  heard the story about the sign above Goebbels’ Propaganda ministry: “the misery of Germany is due to Jews and cyclists”.

The reader wonders: “why cyclists?”

Just as absurd – why Jews?

Transpose the story to Iran after the 1979 Islamic Revolution, and substitute ‘pianists’ for ‘cyclists’. As under most forms of totalitarianism, the Jews remain a soft target, although they have been in the country since before Cyrus the Great.

Dalia Sofer’s novel ‘The Septembers of Shiraz’ captures the full horror of the Ayatollahs’ reign of terror. A pianist who played for the deposed Shah’s friends is arrested. He is imprisoned and shot by firing squad.

The Ayatollahs wage a deadly cultural war against western influence. Under strict Shi’ism, music is forbidden. Pianists have no future, especially those associated with the Shah. However, the new order  also gives the have-nots a chance to settle private scores with the haves – to take collective revenge on them. The communists are not spared either, for their revolution against the Shah has been commandeered by the ruthless, Koran-wielding Revolutionary Guards.

Isaac Amin, a wealthy gemstone dealer, is arrested, both because he is a Jew, and because he made his fortune under the old order. Based on her own father’s experiences, Dalia Sofer’s exquisitely-written novel tells Isaac’ s anguished tale of torture and survival. Will he be executed like the wretched pianist, this time on the false charge that he worked for the Mossad?

Sofer  tells her story through the eyes of the four members of the Amin family:  Isaac himself and his wife Farnaz, who abandons her life of frivolity to search frantically for her husband. (Longstanding relationships disintegrate. Can Farnaz still trust her housekeeper, or has she turned informer ?) The Amins’ nine-year-old daughter Shirin plays her small but risky part in stemming the tide of unstoppable arrests. The student son Parviz is safe in New York, but is cut off from news of his family as his money runs out. The ultra-orthodox Jewish community sheltering him in Brooklyn is at once understanding of his lonely plight, and alien to a secular Jew from Persia like Parviz. Happiness with the daughter of his Haredi landlord is out of reach.

During the painful absence of her husband, Farnaz reflects back on her marriage, which began with a romantic encounter with Isaac one September in Shiraz. It is September once more when Isaac, who has bought himself his freedom and is reunited with Farnaz,  puts his family’s life in the hands of smugglers, and they embark on the dangerous journey out of Iran through Turkey.

‘Septembers of Shiraz’, published in 2007, has been turned into a film starring Adrian Brody and Salma Hayek. It was released in September of course. The film has been panned by some critics. But no matter its shortcomings, the film will have performed a useful function: to familiarise a mass western audience with the ways of a cruel and fanatical regime on the threshold of becoming a nuclear power.

Septembers of Shiraz premieres in London on 12 November at the UK Jewish Film Festival.