The Blogs
Michael Berkowitz
Apply for a Blog
Please note that the posts on The Blogs are contributed by third parties. The opinions, facts and any media content in them are presented solely by the authors, and neither The Times of Israel nor its partners assume any responsibility for them. Please contact us in case of abuse. In case of abuse,
Report this post.

Round about Passover my nephew Jason shared a speech by Ron Prosor, Israel’s ambassador to the UN, on Facebook. Historically, when Jason’s veered off from posting about family, music, sports and work into politics, it’s been to wonder at what those wacky Republicans have gotten up to now, so I was pleasantly surprised and told him so.

In his response, after the disclaimer that he’s a staunch Liberal (which of course I knew and which he described in much more colorful terms), he wrote: 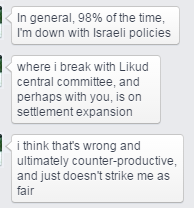 Jason is among the more thoughtful people I know (all of my sisters’ kids are), so I figured that if I want to assert that settlement expansion is neither wrong nor counter-productive I need to cover the topic with some thoroughness (though strictly as a layman). And once I’m doing that, I thought, it might be of general interest. So here are my thoughts on the legal, moral and practical aspects of settlement expansion.

Although officials of various governments have been calling settlements “illegal” (or “inconsistent with international law” or some variation thereof, which is not the same) for many years, I’m told that there’s been no occasion of an international legal body actually handing down a judgement saying so. The closest was when the International Court of Justice ruled on the separation barrier that Israel has been putting up to reduce terrorist infiltration, but that was an advisory ruling requested by the Security Council and made only brief reference to settlements.

Even had it been an actual ruling, though, I’m comfortable ignoring the ICJ because of its obvious partiality in this case. This is obvious from its circular reasoning (it basically tells the Security Council that settlements are illegal because the Security Council has described them that way); from its repeated reference to the Occupied Palestinian Territories, which is a historical non-sequitur; but mostly from the fact that it’s applying this law solely to Israel. Not Turkey/Cyprus, not China/Tibet, not Morocco/Western Sahara, not Armenia/Azerbaijan. I’m told that international law has no provision against malicious prosecution, but that doesn’t change the moral calculus. I’m aware that it’s dangerous to say that Israel can’t get a fair shake in the ICJ, but if that’s the situation it’s even more dangerous to deny it. And who knows? If they were adjudicating an actual case they might sober up and rule according to the law rather than grandstanding. In any case, the nature of a law is that it applies to a category of situation, not one specific situation; a law that’s trotted out only when Israel is involved is not a law.

But if settlements really are against the law – meaning if I really believed that, regardless of the fact that no official ruling has been handed down – shouldn’t I oppose them? That’s a valid question were everyone agreed on the law, but the commission headed up by retired Israel Supreme Court Justice Edmund Levy has disagreed, as have other jurists, and their arguments make intuitive sense to me. Maybe I’m latching onto that opinion because it suits me.  And maybe the people promoting the opposite opinion are doing so because it suits them. Bottom line: I have no good legal reason to forbid a settlement from expanding.

The area where I live, Gush Etzion, was owned and farmed by Jews prior to the creation of the State of Israel, at which point they were either massacred by local Arabs or taken prisoner by the Jordanian army. By what definition, then, is this “occupied” territory?

That, of course, is a local condition and doesn’t hold true of the majority of settlements, but it highlights the fact that the reality is likely more nuanced than you’ve been led to believe. The “land grabs” one hears about are almost entirely fictional, as evidenced by the fact that Palestinians have successfully evicted Jews from land whose ownership they could prove (the level of proof required is, I’m told, somewhere between what anti-Israel NGOs require to make a claim and what the court requires when the defendant is the State). I don’t see any justification for expropriating private Palestinian property – other than Eminent Domain, which applies to Jews as well – but as I said, that’s not what we’re seeing.

Ownership of the real estate, then, isn’t the issue; the issue is political control. Is it right to keep all these Palestinians from exercising their rights as citizens over the place where they live?

I think that, given the available options, it is.

Transferring political control over any more area to the Palestinian Authority has various problems:

A few points are worth remembering here:

They do suffer from restricted movement, occasional incursions by the IDF to arrest suspects and other side-effects of the security situation, but they perpetuate that by maintaining their enmity, their maximalist demands and their disregard for all laws of war.

Israel has a responsibility to see to the welfare of people living in areas that it controls, and that includes providing adequate land and building opportunities for Palestinian communities in the territories, but there’s no moral reason to prevent the allocation of other public lands for the use of Israelis.

Okay, so there’s no legal or moral impediment to expanding settlements. Shouldn’t we stop anyway, just because it ticks everybody off and prevents a deal with the Palestinians?

The idea that we’ll reap benefits in world opinion or neighborly relations is hard to credit theoretically and flies in the face of experience. The obvious starting point is the fact that Arab attempts to destroy Israel predate the settlements. Dipping into subsequent events there’s the departure from Gaza, which brought rocket attacks and tunnels but precious little good will – and even that evaporated quickly. Perhaps more directly related is Netanyahu’s ten-month expansion moratorium, which failed to bring the Palestinians to the table (if they came nine-months in it’s hard to say that’s because of the freeze).

Of course these facts don’t constitute proof that stopping expansion won’t work this time, but the people who say that have, as they say in Latin, a lot of splainin’ to do – and they haven’t bothered to do it. I think it more likely, and more reflective of experience, that acceding to demands will be met with more demands.

That would be a good practical reason to keep building even if we didn’t need it, but given that people want nearby housing for their grown children and grandchildren, and others are boxed out of communities they want to join and homes that are convenient to their work and school – and all the other reasons that we build anywhere – I’d want a really compelling explanation of why it’s a good idea.

About the Author
Michael and family moved from NYC to Alon Shvut in 1986. He works in Software; blogs sporadically on education, public policy and whatever else comes to mind; chairs the boards of two educational institutions and practices philosophy in the ancient tradition of corrupting the minds of youth.
Related Topics
Related Posts
Comments