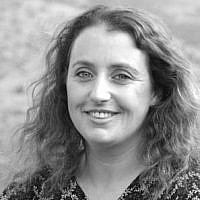 The Blogs
Einat Kramer
Apply for a Blog
Advertisement
Please note that the posts on The Blogs are contributed by third parties. The opinions, facts and any media content in them are presented solely by the authors, and neither The Times of Israel nor its partners assume any responsibility for them. Please contact us in case of abuse. In case of abuse,
Report this post.

The ancient mandate of Shmita obligates all farmers in the Land of Israel, once every seven years, to leave their fields fallow, relinquish ownership of the produce, let the soil rest, and enable all people (and animals, both wild and domestic) to take part in the land’s blessing.  During this year, financial debts are cancelled, and people receive the opportunity to start over in a new period of financial and social freedom.

During Shmita, property assumes less importance, time is less pressured, and nature becomes much more than a resource to be exploited.  Shmita presents an alternative to the race of modern life and is characterized by love of the people and Land of Israel, a heightened sense of social responsibility, and a framework for environmental practice.  Shmita invites us to renew quality of life in all spheres of reality, through a unique public effort.

It is a year of social involvement, spiritual and ethical renewal, and environmental reflection.

It is a year of brotherhood and sisterhood, culture, spirit, family, and community.

It is a gateway in time, once in seven years, to renew the covenant between humans and earth.

It is a year that leaves a distinct impression on the subsequent six years.

Recognizing that the values of Shmita are fundamental to education in Israel, and with an understanding that with the return of the Jewish people to Zion, the Shmita year can now be actualized, we, the undersigned, seek to revitalize the Shmita year and establish it as a year of individual, social, communal, and national significance.

Almost half a year ago, the “Israeli Shmita Declaration” copied above was signed in Tel Aviv by the Chief Rabbi of Israel, Rabbi David Lau, as well as tens of representatives of Jewish identity organizations, social activism NGOs, educational institutions, and businesses, marking the launch of the groundbreaking Israeli Shmita Initiative.  At the launch event, round table discussion groups addressed the question “What is Shmita?” in the context of education, economy, welfare, environment, social justice, Israel-Diaspora relations, national unity, local community-building, and the business world.  Shortly after, a special session in the Knesset featured ministers and MKs (led by MK Ruth Calderon, Chair of the Opposition, and MK Yitzchak Herzog) stating their commitment to promote a meaningful Shmita year in Israel.  Since then, the above-mentioned conference participants and government officials have been busy working together to build a wide-scale coalition that will effectively put the Shmita year back on the Jewish calendar year in the modern State of Israel, as a time of self-reflection, social involvement, and environmental responsibility.  It is called “Israeli Shmita.”

What is it about the Shmita year that is driving so many people to reconsider their lifestyle and that of Israeli society in general?

The mitzvah of Shmita, as it appears in Behar, this week’s Torah portion, is part of a seven-year cycle that shapes the way the Jewish nation relates to the building blocks of life – G-d, land and possessions, work, the other (neighbor, poor person, convert, and animal).  It expands the notion of Shabbat, a time of rest and peace, from the individual sphere to the national sphere, as Rav Kook writes in Shabbat Ha’aretz:

Life can only be perfected through the affording of a breathing space from the bustle of everyday life. The individual shakes himself free from ordinary weekday life at short and regular intervals-on every Sabbath…What the Sabbath achieves regarding the individual, the Shmita achieves with regard to the nation as a whole. A year of solemn rest is essential for both the nation and the land, a year of peace and quiet without oppressor and tyrant…It is a year of equality and rest, in which the soul reaches out towards divine justice, towards God who sustains the living creatures with loving kindness. There is no private property and no punctilious privilege but the peace of God reigns over all in which there is the breath of life. Sanctity is not profaned by the exercise of private acquisitiveness over all this year’s produce, and the covetousness of wealth stirred up by commerce is forgotten. For food – but not for commerce.

The idea of a conscious society that scrutinizes and challenges its own conduct in the most basic areas of life and spirit on a regular basis is an inspiration for many people who feel that today’s Israel would greatly benefit from such a process.

On a personal level, the idea of Shmita challenges the western consumer ethic to which we have grown accustomed in recent generations.  Shmita teaches us that the source of our strength and blessing is not rooted in the individual.  The land rests for G-d, we rest from laboring in the fields – and still we enjoy abundance.  Implicit in the concept of Shmita is the understanding that our personal occupations and possessions are not what define us – wealth, happiness, health, and abundance are Divine gifts, available to all in equal measure. The idea of taking a break from the “yoke” of work for a year (the farmer of the past) for the good of one’s family, community, culture, and spirit, captures the imagination of many.

Shmita also offers a radical environmental perspective – a break for an entire year from what is ordinarily a purely utilitarian relationship with the natural world.  Shmita offers a space in which we can both acknowledge nature’s gifts and enable natural resources to regenerate after an extended period of use (or overuse, as the case may be).  Likewise, the concept of debt forgiveness in the Shmita year, which does not appear in Parshat Behar, expands this idea of restoration to include the economic world, and offers every person an opportunity for a financial “jump-start.”

What is different about this upcoming Shmita year?  Why is the time ripe to bring the deeper ideas of Shmita into the light?

The wealth of ideas and values that Shmita encompasses, of which only a few are mentioned here, provide a welcome complement to the typical Shmita-year topics of Kashrut and gardening (not relevant for many Israelis).  In general, Shmita is characterized by tedious and temporary mechanisms designed to cope with the logistics of the Shmita year.  In order for foundational change to occur, now and throughout the next stage in the Shmita cycle, individuals, organizations, and institutions must take an active part in the process.

Israelis appear to be ready and eager to do just that.  The upcoming 5775 Shmita year has already begun to inspire a host of local and national initiatives spearheaded by Israelis seeking social and environmental transformation.

The reason for the new-found interest is varied. Five years ago, the whole topic of Jewish identity for secular people was less developed.  Likewise, the public call for social justice.  The last national elections, along with the social struggles of the past two years, set the stage for some real processes of deep change in Israel.  The general Israeli public is now engaged in an ongoing national conversation about social-economic identity.  The conjunction of Shmita year with a climate of political and social openness invites the possibility of applying Jewish social-environmental values to the endeavor to strengthen the Jewish democratic nation.

For the religious public, it seems that more and more people are seeking a deeper meaning to Shmita – to take Shmita a step beyond the factional conflicts surrounding issues of Kashrut and agricultural industry.  They wish to apply this mitzvah in as many facets of life as possible, expanding the halachic conversation to one that touches upon the spirit of the commandment and its contemporary implications.

For all of these seekers, there is a practical address for organizing and doing in preparation for a meaningful Shmita year. In previous Shmita years, some individuals and organizations did attempt to raise awareness about environmental, social and economic issues connected to the values of Shmita.  Most of them did not succeed, primarily because began during the Shmita year, initiated by very busy people who did not coordinate with others and simply tacked the Shmita concept on to what they were already doing.  Israeli Shmita is different.  In 2013, over a year before Shmita, the initiative began to bring together educators, leaders, and government officials.  Most importantly, it provides an unprecedented framework for grassroots activists and local and national government agencies to work together.

As the 5775 Shmita year approaches, the Israeli Shmita initiative encourages us all – individuals and communities alike – to embark upon a course of study and action that bring the Torah values of Shmita into our everyday lives.  Join a Shmita leadership program, or establish a Beit Midrash in a local synagogue or community center.  Or you can jump on board one of the wide-ranging community programs supported by the Israeli Shmita initiative, such as the Shmita Debt Relief program, in which designated funds will support a unique Shmita year economic recovery program, in which debt forgiveness is the first step on the road to financial rehabilitation for thousands of Israeli families in severe need.  Another community initiative, spearheaded by the Center for Halacha and Instruction, calls for communities to establish volunteer time banks, in which community members “deposit” hours of their time dedicated for the welfare of the community (around an hour a week).  The “bank” will be operated in a community framework for maximal optimization of the volunteers.

Basically, choose any format you want to ensure that you and your community reach the Shmita year well-prepared with activities that draw people together and nourish local culture and spirit.

I will end with a wish that Shmita will bring an air of unity and peace to Jews in Israel and round the world, as articulated by the Kli Yakar, a rabbi, poet, and Torah commentator from the turn of the 16th century:

The year of Shmita…promotes a sense of fellowship and peace through the suspension of cultivation, even for the needy of your people, for one is not allowed to exercise over any of the seventh year produce the right of private ownership. And this is undoubtedly a primary factor in promoting peace since most dissension originates from the attitudes of ‘mine is mine,’ one person claiming ‘it is all mine’ and the other also claiming ‘it is all mine.’ But in the seventh year all are equal, and this is the real essence of peace.
– Kli Yakar, on Devarim 31:12

May we all merit peace and fellowship during the upcoming Shmita year.

About the Author
Einat Kramer is the founder and director of Teva Ivri, a non-profit organization promoting Jewish social-environmental action in Israel. She is also the coordinator of the Israeli Shmita Initiative, a nationwide coalition that seeks to restore the meaning of the Shmita year as a time of personal reflection, learning, social involvement, and environmental responsibility in Israel. She lives in the mixed community of Eshchar with her husband and four children.
Related Topics
Related Posts
Einat Kramer
Comments