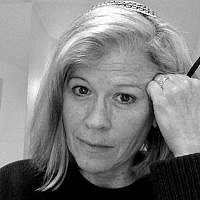 The Blogs
Ariel Stone
Apply for a Blog
Advertisement
Please note that the posts on The Blogs are contributed by third parties. The opinions, facts and any media content in them are presented solely by the authors, and neither The Times of Israel nor its partners assume any responsibility for them. Please contact us in case of abuse. In case of abuse,
Report this post.

But when Moses told this to the Israelites, they would not listen to Moses, their spirits crushed by cruel bondage (Exodus 6.9)

Traditional Jewish teaching about the escape of our ancestor Israelites from Egypt maintains that it could not occur until we cried out and our cry reached HaShem. One might ask, wouldn’t HaShem already be aware of what’s going on? Isn’t a god supposed to be omniscient?

It’s not an either/or for Judaism. On some transcendent level, all is connected and everything intersects with everything else; small movements can echo through space and time in ways we cannot predict (this idea is called the Butterfly Effect in Chaos Theory). A midrash recounts how, although many people were doing terrible thing, it was the torture of one righteous young woman led to the complete destruction of Sodom and Gomorrah. In our own day we know how many young Black people are murdered by police; yet it was the murder of one person, George Floyd, in May of 2020 which led to an uprising against state injustice that swept the US.

The mystics of our people insist that this intimate interconnectedness exists everywhere and at all times; it is the condition of Being in the entire Universe (uni verse, not multi verse). But when Moshe, the reluctant prophet, is pushed by HaShem to go speak to the Israelites and let them know that HaShem has heard them, that their cries have caused (finally) the world to move, they cannot hear it.

Pharaoh had succeeded at this stage in making the people forget their dreams of freedom or at least improved conditions, by burdening them with additional hard labour. (Chizkuni, Exodus 6:9:1)

Remember back when the message that drove Western society was do more, produce more, and some of us boasted of our workaholism? Then came the pandemic, which demonstrated for us all that we and the planet could be healthier if we didn’t do so much all the time. But what happened? It’s as if Pharaoh doubled down, insisting that we produce at the same rate with less support. Come back to the office, ignore the pandemic’s effects, work harder with less job security. And to distract from this essential injustice, marginalized communities are singled out for torture: trans people, Black people, Jewish people, drag queens….until we are all so anguished that it’s all we can do to focus.

If one is in anguish his breath comes in short gasps and he cannot draw long breaths. (Rashi)

The Pharaoh of our days is that which drives us toward hopelessness and cynicism; it’s too hard to believe that our cries can make a difference against the might of today’s Egypt. It’s too hard not to feel overwhelmed. Some days we feel so constrained by stress that we can’t breathe deeply enough even to scream – much less sing of our hope.

Studying the sources for this parashah I found a curious proverb in connection with this verse about the people being unable to believe in words of a better future.

“There is no benefit to be derived from acacia wood except when it is cut down.”  (Midrash Tanhuma VaEra 2.1)

The proverb is offered to explain that directly after Moshe’s mission fails, HaShem then sends Moshe to Pharaoh, indicating that there’s more, much more, to come: “an old proverb indicating that one must wait until an episode is concluded to learn the result.”

But the proverb might be understood another way. We who feel more like a lonely acacia tree in the wilderness, barren of the ability to produce fruit or even much shade, are not yet without potential – we may just not have discovered where our hope lies, yet. For some of us, it’s in some kind of sacrifice of ourselves that we will find purpose.

Is it in letting go of the idea that we’ll be “back to normal” in our lifetimes, and considering what a “new normal” might be?

Is in coming to the realization that our lives may be “over” in some way, but the children of our community may yet see a redemptive future?

An acacia tree cut down is no longer alive. And only then is acacia tree’s wood able to create the Ark to carry the most important hope of our people.

To recall the prophetic words of Dr Martin Luther King Jr, we may not each get there, but if we are able to remain together and find a way to sing our hope, each one of us can aspire to the exalted fate of that acacia tree. Seemingly alone but yet so necessary to what is most important, each in our own, small way.

About the Author
Rabbi Ariel Stone has been Shir Tikvah’s spiritual leader since the congregation’s founding in 2002. A caring and vibrant leader, she is a knowledgeable teacher of Torah and a recognized scholar of Jewish mysticism. She is the first female rabbi to be the head of a congregation in the state of Oregon. She helped to create TischPDX, Hesed Shel Emet of Portland Oregon, Rachel's Well Portland Community Mikveh, and the Portland Interfaith Clergy Resistance.
Related Topics
Related Posts
Ariel Stone