One of the nicest people I have ever met was Mr. Norbert Schloss, whom I met in the home of Rabbi Benjamin Yudin in Fairlawn, New Jersey. Mr. Schloss was much older than me but spoke to me like we had been classmates. He was humble, intelligent, friendly, and gracious. Originally from Berlin, Schloss had survived the Holocaust and went on to lead a beautiful, pious, charitable, and quiet life. One time, he told me: “you know, if someone dislikes you, there is a lot you can do to change their mind, but if someone hates you, there is nothing you can do about it.” Since he lived through the Holocaust—in Berlin—I knew those words were coming from a place of profound personal knowledge. This insight gave me an entirely new understanding of why we are obligated to hear the story of Amalek—the nation that sought to destroy us for no reason as we left Egypt—despite the story lacking a positive message.

Every year, on the Shabbat before Purim, we fulfill the scripturally mandated obligation to remember the story of Amalek and read it once a year from a Torah scroll, reading in synagogue:

“You shall remember what Amalek did to you on the way when you went out of Egypt, how he happened upon you on the way and cut off all the stragglers at your rear when you were faint and weary, and he did not fear God. [Therefore,] it will be when the Lord your God grants you respite from all your enemies around [you] in the land which the Lord, your God, gives to you as an inheritance to possess, that you shall obliterate the remembrance of Amalek from beneath the heavens. You shall not forget! “(Deuteronomy 25:17)

We all know that when carrying a grudge for a long time isn’t healthy. We all know grudges hurt us more than those we carry it against. We all know we are always better off giving relationships and people a new chance to start a new page with an open mind and forgiveness. So why must we take the time once a year to remember the unpleasant episode of being attacked by the Amalekites on the way out from Egypt? Why must we remember that even if we may choose to forgive Amalek, God never will as it says, “For there is a hand on the throne of the Eternal, [that there shall be] a war for the Lord against Amalek from generation to generation.” (Exodus 17:16). Why not just move on?

To understand this, I am drawn back to the trauma of Mr. Schloss and so many other Holocaust survivors, who had lived side by side for generations, with Germans who suddenly turned on them in the most terrifying way. Above all the loss, violence, death, and unspeakable horrors—there was also the pain of betrayal. Survivors—especially those who lived in Germany and Austria—had to cope with the pain of unspeakable betrayal. The people who were their friends, neighbors, teachers, and in some cases, even family members had turned on them in the cruelest and heartless way.

As famed historian Paul Johnson pointed out, often Orthodox Jews were better able to cope with this trauma than reformed or assimilated Jews. The betrayal of the Holocaust hurt most in cases Jews have taken on the belief they were no different than their German and Austrian neighbors, more so than among Jews who believed there were still irreconcilable differences.

Sadly, this is very much the case as we see the rise in antisemitism in the 21st century. In addition to the shock many experience as they see the monster of antisemitism rear its ugly head again, equally shocking is when it shows in places committed to equality and integration. Jews who have done everything to integrate, contribute, and commit to the societies they are in, suddenly find themselves isolated and on the outs. The pain of betrayal and silence of bystanders is often greater than that inflicted by the perpetrators.

To inoculate the Jewish people against the naivete and lack of vigilance, we are commanded to read the story of Amalek at least once a year. This story reminds us that there will be people who will attack us no matter what we do. It reminds us not to blame ourselves when we encounter the oldest hate in the world, and it reminds us to meet that hate with resilience and bravery. We are reminded that although we must make sure we have an open and fresh mind when dealing with Egyptians and Esau’s descendants as it says (Deuteronomy 23): “You shall not despise an Edomite, for he is your brother. You shall not despise an Egyptian, for you were a sojourner in his land”, we will have to confront hate. We are reminded that there will be minds which we will never be able to change.

Unquestionably, the commandment of remembering the story of Amalek is one that provokes discomfort among many. Sadly, my personal observation is that as we see antisemitism rise more and more, that discomfort is found less and less. Nothing is more antithetical to this commandment than John Lennon’s song “Imagine.” I remember riding my bike across Central Park to work and back home every day, passing next to Lennon’s home on the 72nd St. of the West Side of Manhattan, with these words echoing in my mind:

It isn’t hard to do

Nothing to kill or die for

And no religion, too

Imagine all the people

You may say I’m a dreamer

But I’m not the only one

I hope someday you’ll join us

And the world will be as one”

While Lennon’s words express a noble yearning for a world of peace—a world towards which we must yearn and drive—they can also be lethally blinding. As cases of antisemitism saw a sharp increase in New York, I remember sitting next to a longtime New Yorker who had expressed his upset with the attitude of the generation before us—John Lennon’s generation. He was frustrated at the magical thinking many of us were taught, which was very much inspired by John Lennon’s thinking. The idea that if we somehow imagine the right thing at the universe, the universe will magically shine those things right back at us is unrealistic and can numb us to the real threats that might come our way.

As Lee Harris famously notes in his book Civilization and Its Enemies:

“Our first task, therefore, is to try to grasp what the concept of the enemy really means. The enemy is someone who is willing to die in order to kill you. And while it is true that the enemy always hates us for a reason, it is his reason and not ours. He does not hate us for our faults any more than for our virtues. He sees a different world from ours, and in the world he sees, we are his enemy. This is hard for us to comprehend, but we must if we are to grasp what the concept of the enemy means.”

It is for this fundamental reason that we are obliged to remind ourselves of the story of Amalek at least once a year. While we must dedicate ourselves to Isaiah’s vision of universal peace 364 days a year, we must take one day a year and remember that we will have enemies. What is unique and educationally invaluable—especially when speaking to Jewish children facing today’s unexplainable hate—is the notion that there will be those who hate us no matter what. The fact that they hate us does not mean there is something wrote with us or that we have wronged them; it does mean they are consumed with hate. The fact that some are prone to hate does not mean we should accommodate their hate or excuse their behavior; it means we must push back against that hate and let it be known it will not be excused. As President John F. Kennedy famously said in January of 1961, in his inaugural address:

“Let every nation know, whether it wishes us well or ill, that we shall pay any price, bear any burden, meet any hardship, support any friend, oppose any foe, in order to assure the survival and the success of liberty.”

This approach allows us not only to be vigilant and prepared for this case that we do encounter “any foe,” but it also does justice to victims of past hate. “Zachor” became a sacred aspect of post Holocaust Jewish life. To embrace John Lennon’s “imagine” and pretend that evil does not exist would be to forget the past atrocities—something we may never let happen.

When I read Parshat Zachor and remember the commandment to remember the horrors of the past and never forget, I think of the American Holocaust photographer, George Kadish, who was in Slabodka-Kovno, Lithuania in June 1941. As the war broke out, bloodthirsty Lithuanian nationalists stormed Jewish homes and murdered their residents in cold blood. As the first burst of violence quieted down, Kadish took his camera and ran into the neighboring house. On the floor, he saw a dead child, next to him was his laying his living father with blood coming out of his chest. With his last bits of strength, next to his son’s body, the father dipped his finger into a puddle of his own blood and wrote: “Yidden, Nekama—Jews, Revenge.” George Kadish immortalized this message with his camera and publicized it into an iconic picture following the war. 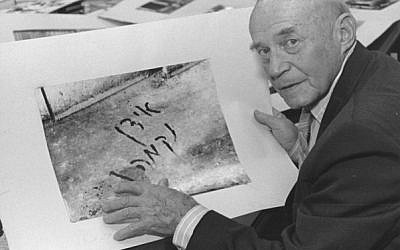 Geoge Kadish with his famous Kovno Ghetto photo that reads “Yidden, Nekama–Jews Revenge”, written by a father sitting in his own blood and the blood of his dead son (US Holocaust Museum allowed for fair use)

While the Jewish people seldom have, if ever engaged in acts of revenge, we have fervently engaged in memory. Zachor. We take the commandment to remember and the sanctity of the lives lost as means to consecrate the lives we are living. The greatest heed to the call “Yidden, Nekama—Jews, Revenge” inscribed in blood in Slabodka, Lithuania, is not going back to that town and place or to those perpetrators; it is that there are today thousands of students in Israel learning in Yeshivas named Slabodka. It is that we are undeterred in leading proud Jewish lives, laser-focused on the future while refusing to forget the past.

As we fulfill the obligation to read the story of Amalek, we are reminded that complacency is never an option and that we must be vigilant. We remember that there will be those who truly hate us—not because of anything we have done, but because of who they are. We are reminded of the sacred imperative of Zachor—remember. We are reminded of survivors like Mr. Schloss and so many others who rose from the ashes, built new lives, saw the beauty and kindness in humankind all while remembering—lo Tishkach—you may never forget.