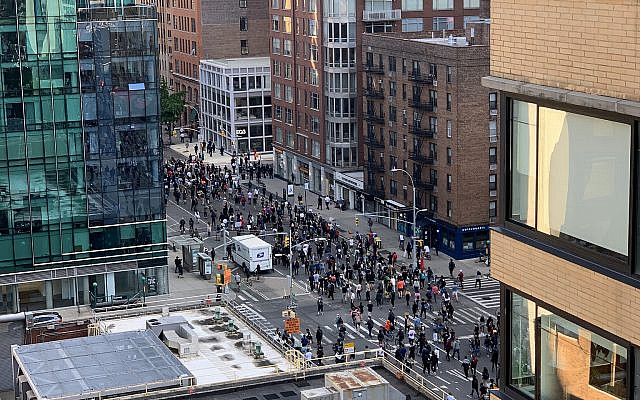 “And he broke the tablets following the sin of the Golden Calf.”

Today’s Daf Yomi is all about Moses, his leadership qualities and the faith that God had in his judgement. We are told that Moses did three things that God approved of: “He added one day to the days of separation before the revelation at Sinai based on his own perception. And he totally separated from his wife after the revelation at Sinai. And he broke the tablets following the sin of the Golden Calf.”

What has resonated with me since my early Hebrew School training is the story of Moses descending the mountain and breaking the sacred tablets that God just gave to him when he saw his people celebrating the golden calf. He was a great prophet, but also a human being who had very human emotions. The pain and anger he must have felt at being let down by his people after the exalted moment of receiving the tablets on Mt. Sinai must have been unfathomable.

What is truly remarkable about this story is that Moses did not give up. He mustered all the strength he had and climbed back up the mountain and received a second set of tablets. When he came down the mountain with the new set, the pieces of the broken tablet were placed into the Holy Arc with the intact tablet. It took a lot of tenacity and humility for him to go back up the mountain, tell God what he had done and ask for a new set of tablets.

This story of Moses demonstrates that sometimes in order to effect change you need to become angry.  His people had received the message when he descended the mountain with the new set of tablets. His angry act of smashing tablets seems relevant for the world we live in today. In the United States, we are fighting two powerful viruses: the coronavirus and racism. Yesterday’s New York Times characterized them as “parallel plagues ravaging America.”  Both have ravaged minority communities that have been affected disproportionately from the economic and health crisis resulting from the pandemic and they have lived with the consequences of police violence for much longer than the coronavirus. Their small businesses are on the front lines of the protests and their children may not have access to virtual learning tools while the schools remain closed.

I live in the Chelsea neighborhood of New York City where Saturday night a group of hooligans on bicycles who I suspect had nothing to do with the protests of police violence set fires in the middle of the street across from my building. There is a fire department on the block which put it out quickly and they moved on to set off fires across Chelsea and Union Square. I received a lot of reach-outs from dear friends inquiring if I am alright, which of course, I am. I was able to watch the action safely from my balcony in a secure doorman building. I worry about those who are protesting shoulder-to-shoulder and if they are being exposed to the coronavirus (please wear masks and be safe.) I worry that our society is broken, like the tablets that Moses threw down when he witnessed his people worshiping the golden calf.

I would like to take a moment to remember the recently deceased Larry Kramer who adroitly channeled his anger to force society to respond to the AIDS virus, that was killing a generation of young and vibrant men. Larry Kramer wrote in his seminal essay, 1,112 and Counting, that “unless we fight for our lives we shall die.” He reminded us that silence equals death.

I attached a photo that I took from my balcony of a peaceful demonstration that occurred on May 31st at 7 p.m. at the same time that people were clapping their hands in honor of healthcare workers and first responders.