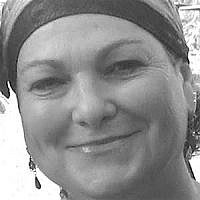 The Blogs
Rachel Horvitch
Apply for a Blog
Please note that the posts on The Blogs are contributed by third parties. The opinions, facts and any media content in them are presented solely by the authors, and neither The Times of Israel nor its partners assume any responsibility for them. Please contact us in case of abuse. In case of abuse,
Report this post.

I arrive in the Ukraine with my daughter to spend a Shabbos in Mezibuz. We are picked up by the driver I have organized and settle down for the long journey. The drivers name is Maxim, and as it turns out, he lives up to the Hebrew meaning of his name. Its 3 am and we are driving into a cemetery. We are in Berditchev. An old man comes to open up the Ohel (small building housing the grave) of Rabbi Levi Yitzhak for us. Afterwards he wants to talk; he tells us he has always lived in Berditchev, that there are still 300 Jews there, and that his mother was killed by the Nazis.We drop him off at his house and carry on to Mezibuz. We have not been in the Ukraine more than a few hours and already our history has both hugged and horrified us.

The whole Holiness compound in Mezibuz runs perfectly. The zion (grave) is inside the compound, the whole area surrounded by an eruv; Hotel, dining room, beautiful grounds and the Ohel housing the grave of the Baal Shem Tov. No detail is overlooked. Klal Yisrael is here; A group of Vishnitz chassidim next to the family from Yodfat, a yishuv in the north of Israel, who has been on a family trip to Rozin where their grandparents were from. Nobody steps into anyone’s space, and we all daven together at the zion of the Baal Shem Tov. I am not a person who goes to kevarim, but here the connection is immediate and personal. There are never more than around five people at the zion, and I sit next to it many times a day. I can’t stop crying. The holocaust is everywhere; but so is a peaceful village that used to be home to the purest Jewish souls. Maariv is at the Baal Shem Tovs’ shul, about a 10 minute walk from the hotel. All the guests make their way there Friday evening. Walking there I ask myself what are the Ukrainians thinking as they see all these Zhiden back here? Dressed exactly as they were before the war! Too many opposites; the Ukrainians are now working for us! They run around keeping the hotel spotless. There’s a guard at the entrance to our part of the hotel. This Ukrainian is now watching over us!

Shabbos after davening next to the kever, I go to make Kiddush. The room is filled with men. I stand outside and the bundle of emotion I carry inside me threatens to overflow. I’m a woman and I can’t even get into the room to make Kiddush. Suddenly something in the air changes and there are 10 men in black hats and gartels and shtreimels running around finding me grape juice. I thank them profusely and make Kiddush. The hippie baal tshuva who is curled up on the bench says “You can make Kiddush for yourself? And I am smiling and crying and wondering why is there nowhere in Israel that we can all spend Shabbat together like this? While I’m resting after lunch my daughter goes to explore the village. She comes back and tells me she found another Jewish cemetery, much bigger than the one next to us where the Besht is buried. A whole Jewish world lived here.

But it is Sunday morning and Maxim is waiting to start the long drive to Uman.

The road from Mezibuz to Uman is forests. If you look carefully you can almost see the Jews hiding between the trees, digging for food, running. I don’t need Babi Yar or Treblinka. This landscape tells the story. It’s like the memories are visceral, we feel them on our skin. The little budka at the entrance to Holiness could have been the budka at the gates of the camp. There’s a low buzz of adrenaline all the time; a watchfulness. But not so much inside the Holiness compound; there we managed to encapsulate the experience of being Jews keeping Shabbat in a small Ukrainian village. Inside the compound we felt safe.

Uman is the other side of the universe. We cannot manage to connect. I can’t find Rebbe Nachman there. The high of Mezibuz begins to get tainted. There’s too much noise, too many Israelis who live there, send their kids to cheder there. There are at least 10 new buildings going up – hotels and apartments for Jews.  We walk down to the lake, where 30,000 Jews do Tashlich on Rosh Hashana, but we just can’t manage to break inside. I feel sad, but somehow part of that sadness is Uman itself. We decide to leave early for Kiev. We will have time to stop at Babi Yar.   My daughter tells me later that the monument we visited at Babi Yar was a general monument. Only in 1991 did the Jews get their own monument. 1941 / 2017……… Not that much has changed.

At the airport in Kiev that night, I see all the women who have made the trip to Uman and are going home on my flight.  How is it that Rabbenu speaks a language which reaches all these souls? I sit with that question on the flight home. It re-connects me to the sadness I felt in Uman. What a container he is, Rabbenu.

About the Author
Rachel Horvitch made Aliya in 1975. She lives in Ramat Beit Shemesh and has a private Psychotherapy practice.
Related Topics
Related Posts
Comments