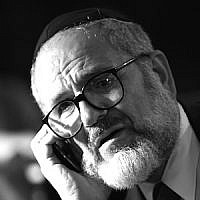 The Blogs
Shimon Neustein
Apply for a Blog
Advertisement
Please note that the posts on The Blogs are contributed by third parties. The opinions, facts and any media content in them are presented solely by the authors, and neither The Times of Israel nor its partners assume any responsibility for them. Please contact us in case of abuse. In case of abuse,
Report this post.

History extols diplomacy. When President Nixon opened the People’s Republic of China to the West, he flew to Beijing to engage with a self-declared anti-capitalist, rabidly anti-American, communist regime. Yet the case for diplomacy was a good one.

China clearly appreciated its new-found legitimacy, conveyed that appreciation to its own people, and was willing to adopt the courtesies of diplomacy as a result. Chairman Mao and his highest officers, in that event, treated the President with respect and grace. Here is the handshake—Mao is on the left. The photo makes the case. 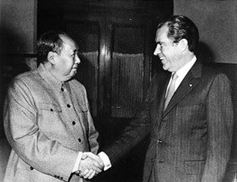 President Obama wants in like manner to open the Islamic Republic of Iran to the West. He has, in words and deeds, been showering legitimacy on Ayatollah Khamenei’s regime from the start. The trouble is we are seeing from the Ayatollah neither the requisite appreciation, nor the proper publicity to his own people, nor the signs of mutual courtesy President Obama’s diplomacy deserves. While the President endorses Iran to the American people, the Ayatollah unleashes Iran’s state propaganda apparatus to repudiate both the President and America. Here is an example: 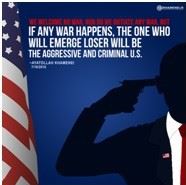 The President pleads the Ayatollah’s case to the American public while the Ayatollah, in rhetoric clearly intended to impune, declares Iran will have no further diplomatic contact with the United States and openly denounces the President to the Iranian people. The President’s administration insists on addressing only the deal’s technical terms, dismissing the Ayatollah’s anti-American eruptions with “We’ve seen this kind of rhetoric before.” In Iran’s mouth, however, this kind of rhetoric has teeth. True believers of the previous Grand Ayatollah took his rhetoric literally and held 52 Americans hostage, for example, for more than a year; currently we know of at least four more. This is diplomacy? Effective diplomacy has to flow in both directions.

America needs to see evidence of a proper diplomatic decorum from Iran, and Congress should insist on it.

The Congress should demand President Obama do as President Nixon did and go to Tehran to seal the deal. The President should go before the Congressional vote to override the veto, to shake the hand of his partner. That handshake between the President and Supreme Leader (and it must be between the heads of state) should be published globally in newspapers, on television and on-line, with the full complement of the world’s press in attendance, and with the people of Iran, especially rural Iran, the American people, the Congress, and the rest of the world as witnesses.

No handshake, no deal, no excuses. Absent a handshake, Congress, particularly those Democrats who favor diplomacy, should repudiate the misadventure and vote to override.

A public handshake won’t make us smarter about the technical details of the deal but it would hold the parties to a dignified historical diplomatic standard. Let’s find out whether the Ayatollah is willing to put his name on the deal alongside the President’s and, while we’re at it, whether the President and the Supreme Leader are both willing to put not only their names on this treaty-like deal, but their faces on it as well. If the President and the Ayatollah shake hands diplomatically, courteously, then at a minimum we will have the record. Should things subsequently go badly, future generations will at least have the photograph to prove that Tehran belongs alongside Munich as a site where peace-seeking leaders shook hands with the devil.

Handshakes cut both ways. They can confer legitimacy on those who wish to earn it or they can as easily de-legitimate those who, out of weakness or confusion, offered legitimacy to schemers intent on abusing it. If America is to grant legitimacy to the Grand Ayatollah, then let’s go all in. Let’s demand President Obama make it real for himself, for the Ayatollah, and for history.

America wants the handshake and posterity requires it. For a deal this important, it’s not much to ask. 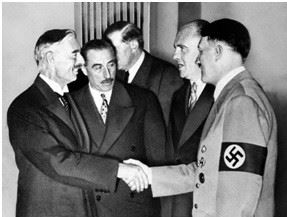