The visit of President Trump to your country and mine got me thinking, and hoping, that based on a new reality in the Middle East, the opportunities for peaceful coexistence have never been greater. While I know you’ll be hosting President Trump, and I haven’t received my invitation to meet with him yet, I’ve been thinking of opportunities this presents for both our countries, and the entire region.

I write to you as a dual Israeli-American citizen, not representing or having any official role or capacity in either country, but as one deeply concerned about the well-being and partnership of both. In this light and spirit, permit me to share some thoughts.

It’s no secret: over the past decade it’s become ever clearer that the common enemy and threat in our region has little to do with what was once the “Arab-Israel” conflict which is now the “Palestinian-Israel” conflict. I don’t mean to diminish the need to resolve issues between Israel and our Palestinian neighbors, but that is not the burning issue that’s preventing peace regionally.

Mindful and respectful of the need for your country and the larger Arab world to maintain this issue on the agenda, it seems clear that there are many more compelling issues for the overall well-being of the region, and all Israelis, Saudis, Palestinians, and other Arabs and minorities. So I wish to put aside the micro issue regarding Israel and Palestinians and look at broader issues that I am sure you will address with President Trump, and that he will address when he comes to Jerusalem.

Between the upcoming visit, new realities in the Middle East, that our countries have never been in armed conflict, numerous opportunities exist for a new look at the Middle East, for tackling the biggest challenges and threats, and to write a new chapter of a future that’s prosperous and peaceful for all.

In the course of refreshing my memory about your family and kingdom, I learned that we share a birthday. That makes us both Capricorns whose characteristics include responsibility, discipline, self-control, and being good managers.   We are also rooted in family and tradition. 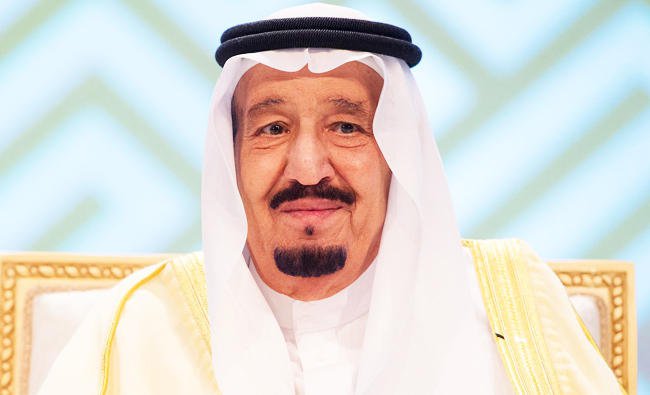 Clearly your family, and tradition that you have inherited from your father and brothers, as Kings and Custodians of the Two Holy Mosques, is significant. Your father established the Kingdom which has become a leader of the Arab world.

Shortly after your father’s reign began, my father was born in Haifa, then under British rule. As a little boy, he witnessed the historic milestone of the restoration of Jewish sovereignty to the ancient Land of Israel. Family and tradition are important to me too, and my family living in Israel today is part of a 4000 year history and connection to that Land.

Our restoration of Jewish sovereignty and return from the exile imposed upon us is not and has never been mutually exclusive to the well-being of non-Jewish, largely Arab, minorities living among us.

Israel’s early leaders accepted a division of what remained of the British Mandate of Palestine in 1947, two states for two people, after two thirds of Mandatory Palestine became the Hashemite Kingdom of Jordan. Untold blood has been spilled and we’ve moved further from that goal. Nevertheless, today, most Israelis would echo the spirit of that idea, and the imperative for us to live and thrive together.

Underscoring the desire to live in peace, Israel’s Declaration of independence, gave voice to this ideal that is worthy of highlighting here:

THE STATE OF ISRAEL will be open for Jewish immigration and for the Ingathering of the Exiles; it will foster the development of the country for the benefit of all its inhabitants; it will be based on freedom, justice and peace as envisaged by the prophets of Israel; it will ensure complete equality of social and political rights to all its inhabitants irrespective of religion, race or sex; it will guarantee freedom of religion, conscience, language, education and culture; it will safeguard the Holy Places of all religions; and it will be faithful to the principles of the Charter of the United Nations.

WE APPEAL – in the very midst of the onslaught launched against us now for months – to the Arab inhabitants of the State of Israel to preserve peace and participate in the upbuilding of the State on the basis of full and equal citizenship and due representation in all its provisional and permanent institutions.

WE EXTEND our hand to all neighboring states and their peoples in an offer of peace and good neighborliness, and appeal to them to establish bonds of cooperation and mutual help with the sovereign Jewish people settled in its own land. The State of Israel is prepared to do its share in a common effort for the advancement of the entire Middle East.

As early Israel began to prosper, Jews returned from throughout our diaspora, and migrants arrived from throughout the Arab world. Many Palestinian Arabs today carry the name of the lands of their origin including, among others, Hejazi.

As the same Arab migrants came to the land of Israel to prosper and thrive together, and on the eve of an historic flight that will take place between our two countries with the leader of the free world who seems to genuinely aspire to a regional resolution of the decades long rift between Arabs and Israelis, I pray that you will use your God given abilities of responsibility, discipline and strong management and leadership to impart to President Trump that you understand and support the imperative to end the broader state of war in which Israel is depicted as the source of the problems in our region, and your willingness to work together with Israel to confront and counteract the real threats that challenge us stemming from Shiite Iran and its evil proxies that pervade.

I pray that you will embrace the idea that not only is Israel not a foreign entity and part of the problem, but an essential part of the solution of the broader problems we face.

3000 years ago, King Solomon reigned in Jerusalem.  He built the Temple, was inspired to write texts that became part of Biblical cannon, and was famous for his wisdom.  I pray that you will take advantage this coming week of an opportunity that may leave a positive impact for our people, thousands of year hence.

After the dust settles from Air Force One leaving Israel this coming week, I’d be honored to come visit you and your family, and to welcome you and your family to visit mine. Through dialogue, and understanding that we have much more to gain by working together, we can achieve great things. I pray that President Trump will land in Israel with that message and this will be not only an historic trip, but a new beginning.