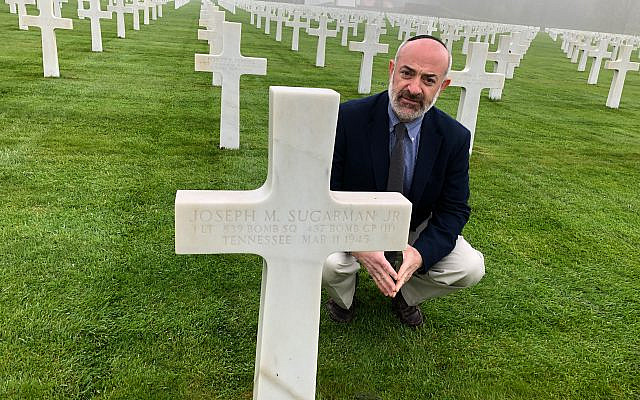 Shalom Lamm is leading the growth and reach of Operation Benjamin. The organization is dedicated to identifying Jewish soldiers at American military cemeteries all over the world, who were mistakenly buried under Latin crosses and replaced the headstones with a star of David. What could possibly be a more noble mission worthy of support?

Indeed, during these challenging and perilous times, it’s incredibly important that more business leaders like Shalom Lamm be afforded just recognition for stepping up to the plate to help philanthropically in whatever way they can, and wish. Given the economically depressed conditions that we find to be especially pervasive during this time, taking on such an initiative carries great responsibility and an extraordinary amount of importance.

Operation Benjamin is indeed a unique mission; and one that is especially sacrosanct. The mission of identifying Jewish soldiers that were improperly buried in American military cemeteries, ensures just and accurate recognition of the soldier’s identity. In turn, this provides an incredible amount of comfort to the families of the fallen soldiers, who have lived lives knowing their loved one was mistakenly buried. Moreover, it provides the added benefit of ensuring the millions of visitors to the American Military cemeteries are afforded the ability to visually understand and also appreciate the shared Jewish sacrifice in the causes of democracy and freedom.

This is not Shalom Lamm’s first involvement with ensuring the contribution of Jewish American soldiers is preserved and promoted. Indeed Lamm was behind the production of Jewish Soldiers in Blue & Gray which is a documentary that tells the tale of the sacrifice of the 10,000 Jewish servicemen who played critical roles on both sides of the battlefield during the civil war.

In the case of Operation Benjamin, the organization is involved in the greatest of mitzvot, or good deeds. As the Torah teaches us, there is no greater mitzvah than participating in a Jewish burial. Part of the reason that this act is considered so holy and such a great mitzvah is because it is indeed a favor that can never be repaid. The organization in this regard, is committing this mitzvah over and over again on a consistent and regular basis, in a way that is imbued with love, respect and devotion.

The Jewish-American soldiers who made the ultimate sacrifice while serving on behalf of the United States in World War II defending the cause of freedom deserve to have their memories preserved. The objective of Operation Benjamin is not simply limited to cemeteries in the United States. Instead, the aim is to locate Jewish personnel at American military cemeteries all over the world who for various reasons, were not buried under the proper markers identifying their true religion and heritage.

Shalom Lamm and the organization work quietly and with a great deal of dignity, without any cost accruing to any of the families involved. It was only natural that through war, paperwork was ignored and mistakes were made. And unfortunately, families were unable to communicate their preferred markers to the government. For those family members who were made aware of the mistakes made, making changes proved to be a very challenging and difficult endeavor. Especially, given the naturally distraught nature of families dealing with bureaucracies and government agencies during times of national emergency.

Under the leadership of Shalom Lamm, Operation Benjamin has developed a working relationship with the American Battle Monuments Commission. The Commission is the United States government agency that serves as the guardian of America’s commemorative ceremonies and memorials. The organization works in tandem with the Commission to submit petitions and to ensure that requests for changed grave markers are expedited. From the very beginning of the process until the very end, Operation Benjamin works and coordinates with the families of the fallen heroes to ensure that the change is implemented.

However Lamm’s involvement in philanthropic ventures and initiatives is in no way limited to Operation Benjamin. For many years, he served as a member of the Board of Directors at Yeshiva College. Shalom was President of Camp Morasha and subsequent to that, Chairman of its Board of Directors for over nine years combined. Shalom was also a member of the Board of Directors of The Jewish Institute for National Security Affairs for many years. During his tenure on the organization’s board, he travelled on missions with the group to Germany, Spain and to military installations in the United States.

Lamm has also been involved in extraordinarily important communal endeavors. Among them has been his founding of the Hatzoloh Medical Rescue squad on the West side of Manhattan, where he personally participated in close to 1,000 medical rescue calls. He also served as a member of the Hevra Kadisha at the Jewish Center in Manhattan for a decade, and has continued being an active member of the Hevra Kadisha on Long Island for many years. Indeed, Shalom’s appreciation for the value of the mitzvah of helping ensure proper burials are conducted for Jews is one that he has carried with him through much of his communal work.

But his willingness to get his hands dirty in the interest of helping others is in no way limited to helping fallen soldiers. After visiting the Ukraine in 1991 while it was still a part of the Soviet Union, Shalom saw firsthand the desperate need for food in Ukraine, among so many members of the Jewish community. Shalom and his wife Tina launched the Kans for Kiev program, which collected and delivered tens of thousands of cans of food to the Jewish community of Kiev.