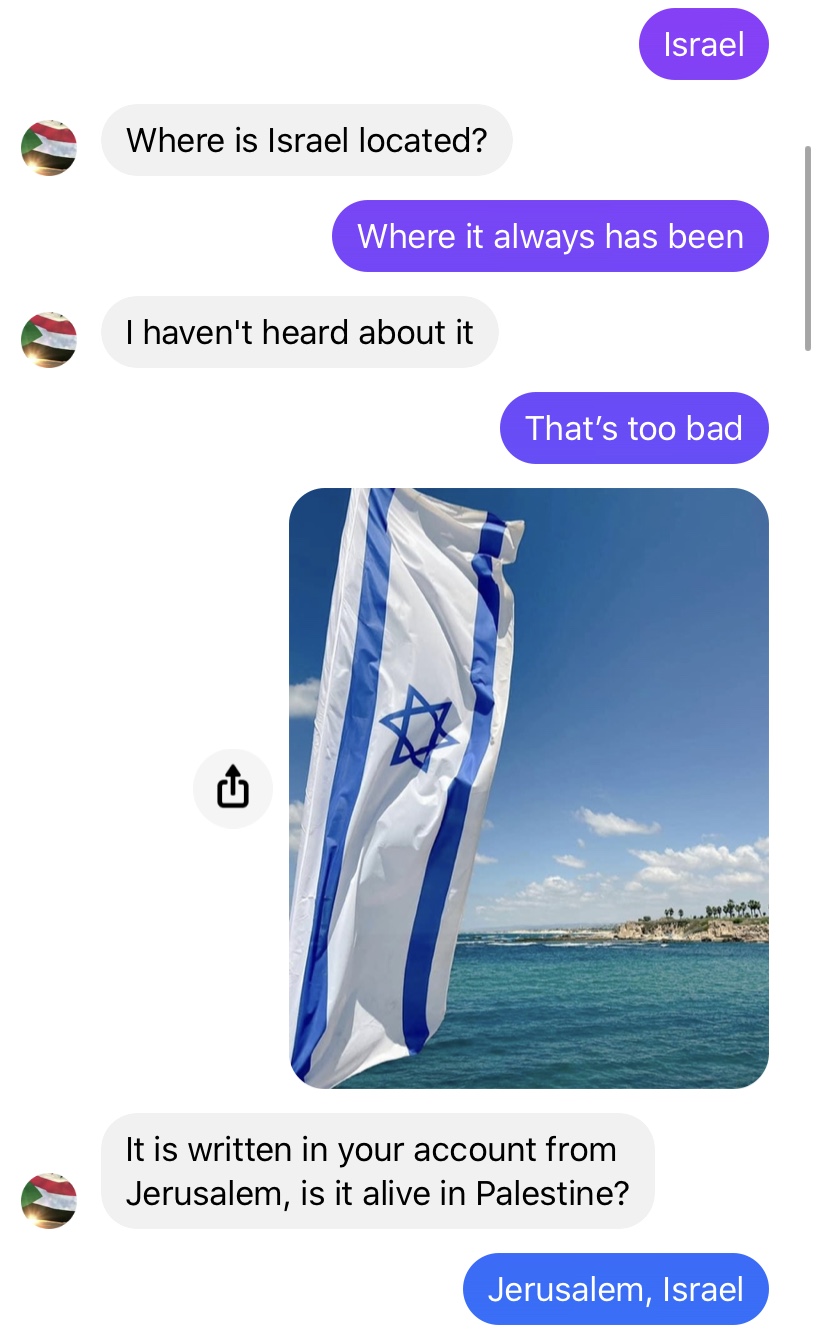 Playing coy, my Sudanese “friend” pretended not to know where Israel was, then let his diatribe fly.

There’s a legitimate degree of euphoria in Israel this week over the announcement of the establishment of diplomatic relations with Sudan, the latest Arab country formally to end its state of war with Israel. Peace with any Arab state is significant, but all the more so given Sudan’s recent turn away from a decades long dictatorship that was hostile to Israel, and the infamous pan-Arab declaration made in Khartoum following the 1967 Six Day War where the Arab League’s strident no negotiation, no recognition, and no peace with Israel.

Having five Arab countries placing peace and prosperity ahead of hate and war is a good thing.  That’s nearly 25% of the entire membership of the Arab League, with reportedly as many as five more countries planning to do so.

Considering that many of the remaining Arab states are emersed in bloody civil and regional wars, making them incapable of governing themselves much less establish relations with others, the total actual number of countries making peace is all the more significant.

Non-Arab players such as Iran and Turkey, competing for hegemony in the Moslem and Arab world, are creating havoc, unrest, and instability.  They also have united many Arabs in realizing that the path to prosperity is not through the brands of extremist Islam that these non-Arab Moslem states proclaim.

There’s also a clear and growing understanding that Israel is not only not the cause of intractable conflict, but that Israel is a cornerstone to peace.  In parallel, a growing number of Arab states, and the Arab street, realize that they have been part of a failed formula; enabling generations of Palestinian Arab intransigence through an endless flow of funding to the mafia-like Palestinian Authority, and propping them up as if Middle East peace rested on their shoulders.

In a now infamous and notoriously idiotic video that has resurfaced over and over in the past few months, former US Secretary of State John Kerry, prophesied that there would be no separate peace between Israel and the Arab world without peace with the Palestinians.  “No, no, no and no,” he preached.

As if they are still reading from John Kerry’s script as if it were gospel, there are no shortage of rejectionists who have condemned Sudan (along with the UAE and Bahrain) for their recent warming of relations with Israel.  It’s to be expected that the Palestinian Authority would be at the forefront of this.  For generations, they have shown they have no hand to play but victimhood, delegitimization of Israel’s right to exist, and continued “armed struggle.”  Sadly, they are so entrenched in this historical failure most famously branded in Khartoum’s “Three No’s” that they can’t see the world around them is moving forward, and they are getting left behind.

Rejection has also come from Israeli Arab leaders, particularly the Israeli Arab “Joint List” that serve in Israel’s Knesset, making up more than 10% of the Israeli parliament.  Sadly, and shockingly, while they may not speak for the average Israeli Arab, their leaders’ rejection of peace between their country and major Arab states underscores to many Israelis that they are a fifth column of society that rejects peace and delegitimizes even their own country and its well-being at all costs.

Because of Sudan’s recent history, deposing a corrupt dictator responsible for death and countless suffering, and seeking to build for their future under an interim government that’s divided, not everyone in Sudan celebrates peace with Israel.  Major Sudanese leaders have spoken out against it, and it’s intuitive that average Sudanese may not be able to put aside generations of inbred hostility toward Israel, much less understand how and why that benefits them.

This was depicted in my reaching out to someone from Sudan on social media.  I didn’t intend to play a formal part in public diplomacy, but I couldn’t resist sharing my enthusiasm.  I wrote, “Shalom from Jerusalem.”  In what seemed as an innocent chat, my Sudanese counterpart feigned not knowing what Israel was, then let it out that Israel was a usurper of the “Palestinian people.” Then he railed into Israel with a hateful diatribe.

He was so blinded by hate, he claimed that “as a people, we prefer to die of starvation,” condemning Sudan to the ongoing suffering it endured for decades, rather than accept or partner with Israel in building a future together. 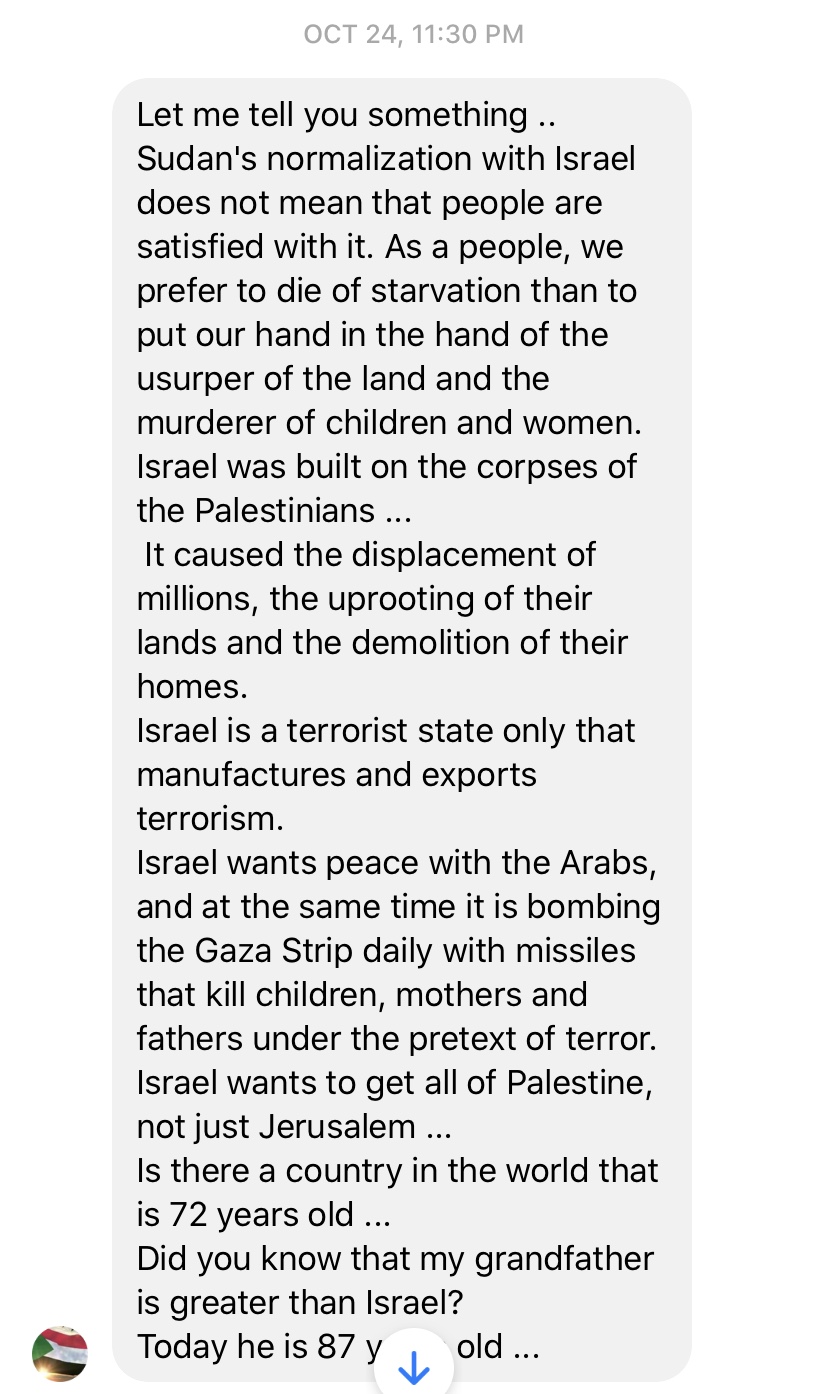 We would rather die of starvation!

I am no less happy about the prospects for peace with Sudan than anyone.  Unlike the other recent Arab states to make peace with Israel, and those that may do so shortly, Sudan’s situation is different.  It’s understandable how there would be more rejection from Sudan if they’ve not spent the past months preparing their people for peace and reconciliation, this must come as a shock and an unwelcome one to many.

If for most of their lives Israel has been depicted as evil, making a pact with “the usurper of the land and murdered of children and women” is similarly evil.  That’s especially the case among people who do not understand the biblical injunction to bless Israel and be blessed, or the consequences of cursing Israel and being cursed. They’re still living in the shadow of Khartoum rather than the hope for the future.

Sudan surely does not need to be cursed any more than it has been since 1967.  Its leaders face serious challenges as they try to rebuild, something that any person of good will would want to support. My concern is that if in a push to be removed from the list of terrorist states to fast track this, Sudan is sprinting ahead in a way that’s leaving its people behind.  I worry that peace with Israel will be a catalyst for forces of evil within Sudan to foment violent and hostile rejection, threatening not only peace with Israel, but the stability and prosperity that those leading the push for peace to which they no doubt aspire.

Israel’s immediate response to confirming normalization with Sudan was to announce sending $5 million of wheat. That’s a blessing indeed. May Sudan see the potential and peace with Israel be a harbinger of peace throughout the Arab and Moslem world.