It was 9th grade.

Not an easy time to begin with.

And I was going to go on the Englewood bus to my high school in Manhattan. Englewood, NJ was different; kids had driveways that took several minutes to traverse; I lived in Teaneck and my driveway was two car lengths…small cars.

I was as nervous as anything. I got on the bus; the other kids were annoyed that their trip would be longer now that this new kid from the next town was on their bus. I walked up the stairs of the bus slowly.

An 11th grader started yelling: “Amelap; here comes Amelap!” I fought back the tears, although I had no idea what he was talking about. Days later when it was explained to me that my name appeared on the bus roster as “Amelap Lerner” since, for who knows what reason, the bus company took my name from my mother’s check which she signed Anne Lapidus Lerner, making my first name into a combination of Anne and Lapidus. 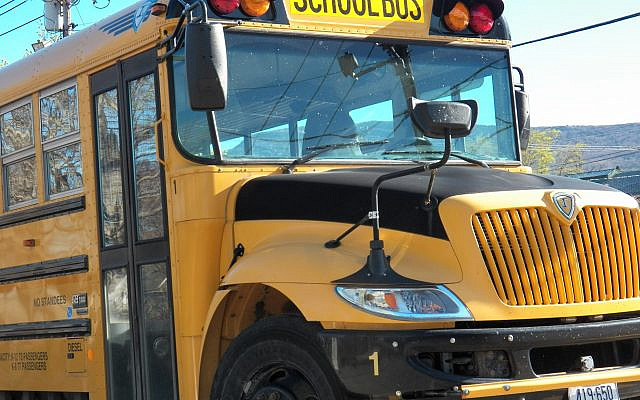 Things went straight downhill from there. The older boys then decided that my head was so symmetrical that they would tease me: “Roundy, Roundy!”

And on and on it went.

They shamed me and I felt ashamed.

Our tradition has its own story about shame, which takes place at the time of the destruction of the Second Temple.

Explaining this disaster, the rabbis in the Talmud ask: “Considering that the people during the Second Temple period were engaged in Torah study, observance of mitzvot, and acts of kindness, and that they did not perform the sinful acts that were performed at the time of the First Temple, why was the Second Temple destroyed? 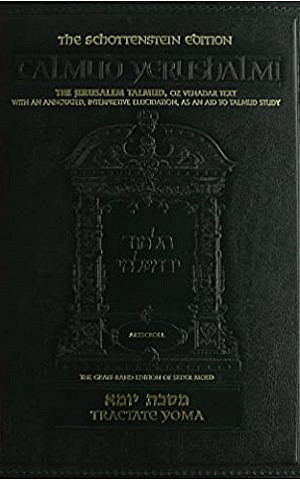 The Talmud says: “It was destroyed due to the fact that there was wanton hatred during that period.” (Yoma 9b)

And to flesh out this causeless hatred – this sinat hinam, they tell the following story about an anonymous man and two others: Kamtza and Bar Kamtza.

This anonymous man had a “friend named Kamtza and an enemy named Bar Kamtza. The man planned a large feast and said to his servant: ‘Go bring me my friend Kamtza.’ The servant went and mistakenly brought Bar Kamtza.

The host came and found Bar Kamtza sitting at his feast. He said to Bar Kamtza: ‘You are the enemy of my friend Kamtza, therefore, you, Bar Kamtza are my enemy. Why are you here? Get up and leave.’ Bar Kamtza said to him: ‘Since I have already come, let me stay and I will give you money for whatever I eat and drink. Just do not embarrass me by sending me out.’

Finally, the host took Bar Kamtza by his hand, stood him up, and took him out. After having been cast out from the feast, Bar Kamtza said to himself: Since the Sages were sitting there and did not protest the actions of the host, although they saw how he humiliated me, learn from it that they were content with what he did.”(Gittin 55b-56A)

From there, Bar Kamtza went to the Roman authorities and informed them about the planned revolt in the Jewish community, which led to the destruction of Jerusalem.

So what can we learn from this story? The blame for the destruction of the holiest place in Judaism can be traced to the action of shaming someone.

Bar Kamtza begged not to be publicly shamed, ostracized, and disconnected from the rest of the community to no avail.

From here, we learn about public shaming, but there is also the private, intimate, personal experience of feeling shame. 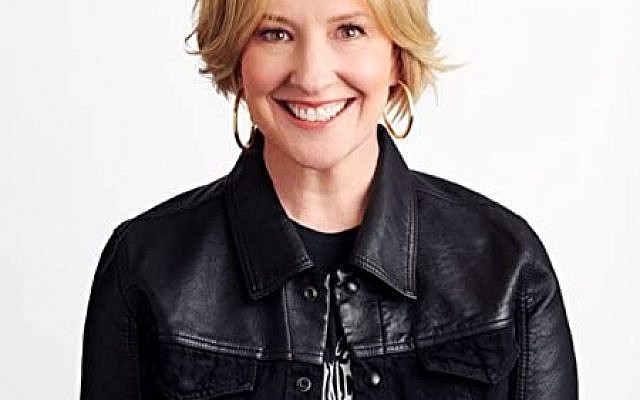 Brene Brown, a professor of social work and best-selling author, has spent decades studying shame and the power of vulnerability. I found her distinction between shame and guilt to be especially illuminating.

As generations of Jewish parents have known, Brown agrees that guilt can be “adaptive and helpful – it’s holding something we’ve done or failed to do up against our values and feeling psychological discomfort.”

Guilt is feeling bad about something we have done or not done. The focus is on our behavior. We regret our actions or inactions. Therefore it motivates us to act differently, to be better in the future. 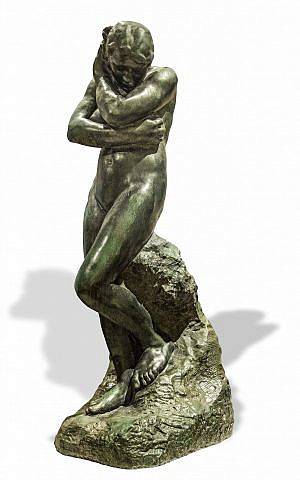 Eve at the Rock (After the Fall) by Auguste Rodin, Musee Rodin (Public Domain)

Shame, on the other hand, causes us to feel that there is something fundamentally wrong with us. Brown describes it as “the experience of believing that we are flawed and therefore unworthy of love and belonging – something we’ve experienced, done, or failed to do, makes us unworthy of connection.”

How many of us right now feel that we are unable to share something we’ve experienced this past year, that we’ve done, or that we’ve failed to do? How many of us are keeping important details of our lives hidden? That there are things we feel that we cannot share even with our closest friends? And because of that, Brown explains, at its core, “shame is the fear of disconnection.” And once we fear disconnection, we do not allow ourselves to be vulnerable, and we close ourselves off to connection.

Tonight, we gather to enact an ancient ritual together. We rise and declare Ashamnu – we are guilty, we have betrayed, we have robbed, we have spoken falsely – ashamnu, bagadnu, gazalnu, debarnu dofi – we have hurt others. And all of us have done this. We all bear guilt in different ways. And we name them – explicitly. 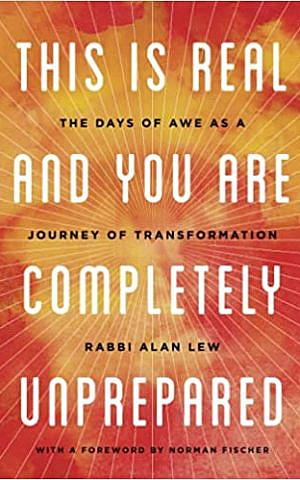 The metaphorical book of our misdeeds over the last year is shared. As Rabbi Alan Lew writes: “we read the book we don’t want to read. I have done this and have done that, and I acknowledge it is irreversible, it can never be undone, but I cover it over now. I resolve to begin anew.” (This is Real and You are Completely Unprepared, p. 245)

Known as the Vidui, the Confessional originally appeared in the prayer book of Amram Gaon in 8th Century Babylonia. The practice is psychologically brilliant. We do not go into a solitary space, we do not atone alone; the tradition invites us all to stand as one and declare all the sins – some we may have committed and some we may not have. But as a community, we take responsibility for all of these behaviors. Under certain conditions, we are all capable of behavior that causes us to feel embarrassment and shame. And today, whatever harmful behaviors we have engaged in, or whatever damaging words we have expressed over the course of the past year, whether towards ourselves or others, we will not be sent away. In fact, it is just the opposite – we are encouraged to stand as one.

Some of us open our fists – symbolically removing our sins, allowing ourselves to let go and some of us strike our chests in an act of contrition. The latter is described by Rabbi David Wolpe as “a sort of spiritual defibrillator to get our hearts beating anew.”

Let’s view the Vidui as an opportunity to release our feelings of shame around behaviors that we are not proud of. As human beings we are all vulnerable, and we are all deserving of compassion. As we take responsibility for our behaviors and cast off our sins, we release our shame, and stand together, knowing that each one of us, all of us, are welcome, worthy, created in the image of God.

That is what I hope for our community. Not merely reciting Ashamnu time and time again over this day of Yom Kippur, but going even deeper and finding ways to share our vulnerabilities.

This is not easy, nor am I suggesting that we publicly announce our deepest secrets; instead, tonight, let us commit to trying to create an environment where we can develop our relationships. Let’s embrace those who are new to our community. Let’s identify those people with whom we would like to become closer.

A recent example of relationship deepening occurred a few weeks ago at our outdoor Kiddush at a community building session where people shared more deeply with each other, one-on-one. Those are moments where a conversation can lead to more connection.

And as a community, we should not shame. Instead, we should counter shame. Sometimes we shame others as Bar Kamtza and I experienced and sometimes we are afraid to share, fearing shame.

This means we are aware that we are all human and all fragile.

Many times in our liturgy we ask for help in avoiding what happened to Bar Kamtza, we ask to avoid the pain of bushah u’khlimah – embarrassment and humiliation, as we recite in the prayer for the new month.

And the secret is right here – in this room and in this Zoom, it’s us.

May we together help us move from shame to vulnerability, deepening the relationships that can support us. That is what the world needs – to move away from shame to shalom, from disconnection to deepening.

Let us confess together to begin the process tonight and make this the year when our Emunah family models this.

G’mar Hatimah Tovah – may we be sealed as individuals in the book of life, mindful of the way our community supports one another and enriches all of our lives and let us say: Amen.