I am embarrassed with my country. I am ashamed that a racist attack against our brothers and sisters from the former Soviet Union was even allowed to be aired last night on national television [see editor’s note below] and the time has come for serious soul searching. 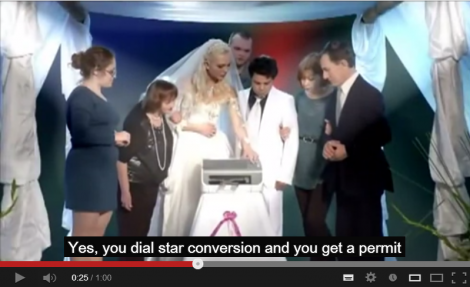 The summer of 1992 may have been the most important summer of my life. I served as a counselor in a camp for children of all ages in Tiblisi, Georgia in the former Soviet Union. Our role was essentially to prepare these children for their aliyah. They already knew Hebrew and our job was to teach them about Judaism. I was so inspired to see young children from families who had been robbed of any Jewish education for decades, with such a thirst for knowledge about their heritage. We did not ask any questions about their specific backgrounds. No one asked if their mother was Jewish and no one asked if their father was Jewish. We simply showered them with love and affection and they thrived on the embrace they received from this small group of yeshiva boys.

Their excitement about moving to Israel was infectious. They asked questions in anticipation of the move: What is it like there? How does a Jewish country differ from other countries? They expressed enthusiasm about serving in a Jewish army and the honor they would find in defending fellow Jews in a Jewish state.

And Shas has the nerve to disgrace them in this horrific advertisement? And our state allows such a commercial to air? We have taken people who were persecuted in the former Soviet Union because they were viewed as Jews, and are now persecuting them in the State of Israel because they are viewed as non-Jews.

It is time for this to stop!

There is far more that we can and must do to welcome people of Jewish ancestry back into our nation. I hope this racist and hate-filled Shas commercial awakens the entire country to the depth of the problem and that we rally together to do something about it.

At least 300,000 Russian immigrants whose mothers are not Jewish but have a Jewish father or grandfather, currently reside in Israel. They serve in the IDF, study in mainstream Israeli schools, speak Hebrew, and socialize with all other Israeli children. A high percentage of them want to convert to Judaism but have been met with resistance from the Israeli Rabbinate which questions their level of commitment to religious observance, which they consider a prerequisite for conversion according to Orthodox law. 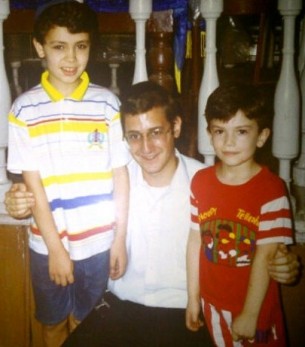 Dov with children in Tbilisi, 1992

It must be stated in the clearest of terms that according to traditional Jewish law not only can we allow their conversions but we must convert them.

According to Orthodox Jewish law, those without a Jewish mother are not Jewish. But those who come from Jewish descent actually fall into a unique category called “zera Yisrael.” According to some of the most prominent medieval sages, this designation means that while they are not Jewish, they are closely connected to the Jewish people and this impacts their conversion status. Rabbi Tzadok Hacohen Rabinowitz of 19th-century Lublin,Poland, explains that Isaiah referred to these “zera Yisrael” when he described the “lost ones” who would rejoin the Jewish people through conversion upon our return to our homeland.

Shas and others on the religious extreme mock the notion of converting these immigrants because they don’t commit to fulfilling all the commandments. The problem with this is that a demand that a convert commit to fulfill ALL the commandments is a modern development. The Talmudic sages never demanded this. The Talmud clearly requires only that we teach conversion candidates “some lenient and some strict commandments” prior to accepting them for conversion.

These immigrants from the former Soviet Union who want to convert agree to fast on Yom Kippur, to refrain from eating leavened bread on Passover, to recite the Kiddush prayer and light the candles on Shabbat night, and for those in the IDF, to risk their lives to protect the Jewish state (what greater mitzvah can there be?). The classic texts are replete with sources permitting the conversions of these zera Yisrael immigrants based on their intention to observe these basic commandments.

One additional issue demands that we convert these immigrants immediately and flies in the face of Shas, who blame everyone but themselves for intermarriage and assimilation in Israel. If we don’t allow them to convert, these immigrants are going to marry our children anyway. They grow up together, attend grade school together, serve in the army together, study in university together, and tens of thousands will inevitably choose to spend their lives together. And then, in the coming decades,Israel will be ripped apart with disputes regarding which citizens are Jews and which are not. Non-Jewish children will be raised as Jews, but will not be recognized as Jews by the rabbinate or the state. This will polarize Israel in ways it has never been polarized before.

Leadership demands that a problem be solved before it even arises, and in our current circumstance, that means relying on those valid and lenient opinions to convert these hundreds of thousands of immigrants. I am honored to be a candidate for Knesset with the Yesh Atid party, which has made addressing the issue of conversion in general and the conversion of immigrants from the former Soviet Union a top priority.

But the problem goes deeper than the nuances of Jewish law which require us to facilitate these conversions.  The state allowed a racist and hate filled commercial onto the airwaves.  We are on the verge of a potential extremist coalition governing our country.  What has happened to us?  Where are the values of Isaiah who quoted God, Himself, as saying “I don’t want your Shabbat observance and fulfillment of other religious practices while you don’t care for the downtrodden and abuse each other between man and man.”

There is a lot on the line in the upcoming election. Let this racist, despicable Shas television commercial be a wake-up call to everyone. Despite certain parties portraying themselves as warm, embracing, open, and doing what is best for Judaism and Jewish values in Israel, they would actually form an extremist, fanatic, homophobic, and racist leaning government which ignores the most basic of Jewish values – free will.

Democracy enables all of us to stop that from happening.  Voting for moderate voices, like Yesh Atid, will enable a governing coalition to be formed which will restore a moderate and embracing Judaism to Israel.

Instead of simply complaining and bemoaning the Shas television advertisement, we must take action and prevent them and others like them from being the power-brokers in the next government.

The future of Israel is in OUR hands. Vote wisely.

EDITOR’S NOTE: The Central  Election Committee has banned the Shas ad since publication of this blog post.

About the Author
Dov Lipman was elected to the 19th Knesset in January 2013. He is the author of seven books about Judaism and Israel, and holds rabbinic ordination from Ner Israel Rabbinical College and a masters in education from Johns Hopkins University. He has been at the forefront of combating religious extremism in Israel and is a leader in efforts to create Jewish unity both in Israel and around the world. Former MK Lipman is invited to speak on behalf of the Jewish state both in Israel and around the world and serves as a political commentator for i24 News and ILTV. He currently serves as Senior Manager - Community Outreach for HonestReporting.
Comments