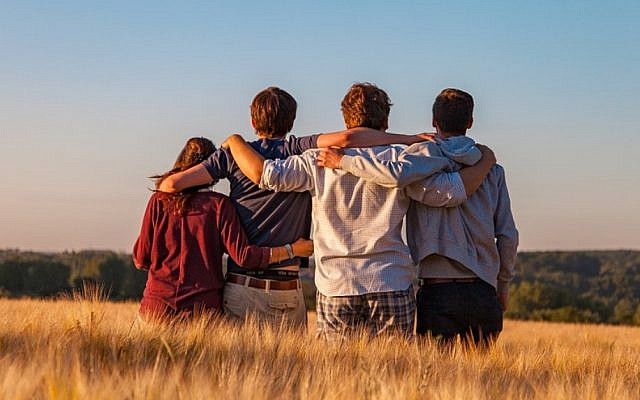 How good and pleasant it is- brothers dwelling in unity.  (Psalm 133)

There is not a Jewish camp in the world that does not have a kumsitz (bonfire) where children come together and sing this song, arm in arm. However, rarely do we sit to think about this deceivingly simple verse. Who are these siblings dwelling in unity? And what does this have to do with the holiday we are about to celebrate?

The deceptively simple turn of phrase, “brothers dwelling in unity,” motivated the rabbis to offer many responses. In context the verse clearly describes the brotherhood of priests (kohanim) who served in the Temple.  Why is their partnership good? It is the joint venture of the priests that is instrumental in drawing down the supernal blessings into the world from the Temple Mount, the source of “everlasting life” (133:3).  However, Rashi, the famous Franco-German commentator of the twelfth century, provides us with a fascinating insight.  He states that the fellowship discussed here is the fellowship between the Divine Presence and the Jewish people collectively when the Temple stood in Jerusalem.  In other words, the verse describes a unique sacred fellowship of not only the priests, but the entire people with God.  Indeed, the Jewish people are referred to as a ‘kingdom of priests and holy nation,’ so the expansion of the metaphor to include every Jew seems logical.

What does sacred fellowship mean, and how does one relate to the notion that I exist not simply as an individual, but as a member of a  Divine fellowship?  To answer this question, we must first examine another text, the last day of the inauguration of the Tabernacle in the desert.  The event is described in the ninth chapter of Leviticus.

There we read about the complex rituals performed by Moses, Aaron, and his sons when the Tabernacle was inaugurated.  At the conclusion of the eighth day of sacrificing and complex sacrificial ritual, Aaron lifts his hands and blesses the people. (Perhaps he offered the priestly blessing).  Following that action, Moses and Aaron together enter the inner sanctum of the Tabernacle, and then come out again and (again) bless the people.  Only then are we told that the Divine presence in the form of a fire appears to Israel.  The rabbis are puzzled at the fact that God appears to the people only after the second blessing.   Why do Moses and Aaron enter the Tabernacle together, and bless together the second time?

One rabbinic tradition relates the following: When Aaron came out of the Tabernacle and blessed the people the first time, he was worried; God’s presence had not appeared.  Aaron suspected that he alone was unworthy of ‘drawing down’ the Divine glory.  Indeed, he had made a terrible mistake with the fashioning of the Golden calf and harbored a sense of inadequacy and guilt.

He turned to Moses to assist, and together they went into the Tabernacle, praying that God would shower God’s glory upon the people.  Then, when they go together as a unit and again pray, the prayer is efficacious.  One midrash there interestingly quotes our Psalm, “How good and pleasant it is, brothers dwelling together.”   The midrash teaches us something fundamental.  Despite the greatness of Aaron or Moses, neither alone could bring down the Divine presence.  Only through working together could this be achieved.   God resides among the people only when one person extends themselves to another.  God resides in the fellowship between people.  (Pesikta Zutarta (Lekach Tov), Vayikra Shemini 27a)

It is interesting to note, that when God created the world, God stated at the end of every day that it was good. The first time that God states that something was not good is in the second chapter of Genesis. “It is not good for man to be alone. I will provide for him a helpmate.”  In other words, fellowship is essential.  To reach out and help another in need is not only nice, but also good.  In reaching out to each other we realize the interdependence of all of us, that each of us truly needs each other.  When we do this, God blesses this fellowship by revealing God’s presence.  In recognizing that no person is an island, in recognizing the importance of another, we make room for the ultimate Other.  The fellowship of humanity ultimately leads to the fellowship of humanity and God, and this is the point that Rashi is making.

What does all of this have to do with Shavuot? Just like the Glory of God entered the tabernacle, Shavuot is a night of Divine revelation.  More than simply God revealing the Torah, God revealed Godself. Most revelations are given to the select few, to a prophet or seer.  The Jewish story of revelation is unique particularly in the fact that it was collective by nature.  God appeared before the entire Jewish people, and not one person was excluded.  While often people look at this from the standpoint of God’s power, perhaps we should look at it from the vantagepoint of the people.  The fellowship of the entire people together engendered God’s response.  God’s presence would not have been revealed in the way it was for anyone, even Moses.  The people themselves, the community, was the subject of God’s revelation.  While Moses alone ascended the mountain, God symbolically descended the mountain and spoke the words ‘I am the Lord your God” to the entire people.  That is because the Torah was not given to Moses, it was given to the entire community- a nation

This point should not be underestimated; many other traditions tend to focus upon the need to separate from the collective in order to experience transcendence.  Often the community is seen as a toxic obstacle to spiritual enlightenment; I have often felt this in the past few years.

There are some today who talk of spiritual fulfillment and self-realization in strikingly individualistic terms.  This is not surprising, as spirituality like material goods in this country may be considered products that individuals amass.  This form of individualistic piety at the expense of the community is inimical to traditional Jewish norms.  The Torah was given to the entire people because Jewish self-fulfillment can only be achieved in the participation within community.  In Judaism, we are not only trying to realize ourselves as individuals, but as a community.  The nation accepted the Torah as a nation, and we ultimately fulfill the Torah as a nation as well.  Each of us need to play our role in that greater collective product.

Combating hunger, fighting poverty, helping the needy, caring for the elderly, teaching the next generation- all these values are mitzvoth.  They are not only obligations upon us as individuals, but us as a community.  They are the means through which we as a community realize our collective aspirations as a people, values which were rooted at Sinai.  Only through participation in the community can we fulfill our lofty Sinaitic mandate.  This is how we also become holy, and God resides in our midst.  We become like the fellowship of the priests, drawing the Holy and the Good into this broken world.

When we participate in Jewish communal life, we articulate this fundamental insight every day.  We are one, because to realize our greatest aspirations as Jews, we must work together.  To use theological language, the Glory of God only resides within the community.

I conclude with returning to the story of the inauguration of the Tabernacle.  As I mentioned, Moses and Aaron together both came out of the Tabernacle and blessed the people.  What was the blessings they gave?  The rabbis quote Psalm 90, known as the ‘prayer of Moses’.

May it be the will of God that the Divine presence rest upon the work of your hands; ‘and let the beauty of the Lord our God be upon us and may You establish the work of our hands upon us