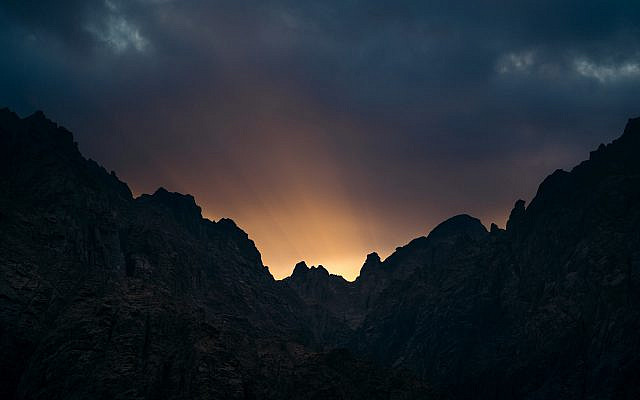 The holiday of Shavuot commemorates one of the most powerful events in the history of the universe. On the simple level, it is the moment that God conferred upon His creations a guidebook that would enable them to understand their existence, navigate their life-journey, and actualize their mission and purpose. As profound as this understanding of the holiday is, the chassidic masters provide an even more astounding account of the cosmic happenings on Mount Sinai which we celebrate (and reexperience) each year on Shavuot.

In describing the events of the giving of the Torah, Moses states that God spoke to the people ‘face to face:’ “Panim b’panim dibber A-donai imachem bahar/Face to face God spoke to you at the mountain” (Deuteronomy 5:4). It is difficult to understand what this could mean. Does it imply that the people saw the actual face of God as they stood at the foot of the mountain?

Clearly this is not the case, as we can see in two earlier Torah verses. In the book of Exodus, God informs Moses that “you will not be able to see my face, for man shall not see Me and live” (Exodus 33:20). If so, how could it be that He spoke to the entire nation “face to face” and they survived? Furthermore, in forbidding the worship of graven images, Moses states very clearly that there was no image seen: “you did not see any likeness on the day Hashem spoke to you at Horeb (Sinai)” (Deuteronomy 4:15). What then does it mean then that God spoke to the people “face to face”?

While the English translation of the phrase is confounding, the Hebrew original can help to clarify our confusion. The wording used by Moses in the verse, “panim b’panim,” does not literally mean “face to face” as it is commonly translated. That would be the literal translation of “panim EL panim.” The Hebrew word “el” means ‘to,’ while the Hebrew letter “beis” (b’) which Moses uses in the verse, means “in.” The expression “panim B’panim” therefore literally means “face IN face,” and the full verse would thus be translated “face IN face God spoke to you at the mountain.”

This is odd, particularly because there are other verses in Torah where the expression “face TO face” is used, and in those cases the more common expression “panim el panim” is employed (see Genesis 32:31 and Exodus 33:11). Why in Moses’ description of the interaction at Mount Sinai does he utilize( the unusual expression “panim B’panim,” and what could it mean that God spoke to us “face IN face?”

The chassidic masters explain that the Hebrew word for “face,” PaNiM shares the root of the word PNiMyus, which means “inner essence.” The face in scripture can therefore refer to an experience of something’s deepest interior as opposed to merely its most surface features. As such, what Moses describes by utilizing the phrase “face IN face” rather than “face to face” is a mingling of “faces,” an infusion of one inner essence into another.

Rabbi Schneur Zalman of Liadi explains this as follows: “And behold it is written ‘face to face Hashem spoke with you’ because at the time of the receiving of the Torah there was drawn down into every single individual of Israel the aspect of Havaya (yud-hei-vav-hei) into the aspect of their ‘face’ in every spark of their neshama” (Likkutei Torah, Parshas Reeh).

What this means is that the giving of the Torah was not simply the transmission of a book of laws and narratives. While the ten commandments and the Biblical text that Moses brought down from Mount Sinai contained a divine wisdom that would revolutionize the universe, there was something even more profound that was conveyed at that moment. “Panim b’panim dibber Hashem imachem bahar” – at the mountain, God infused His face, His quintessence, into our face, our innermost core.

This provides an entirely new and earth-shattering context to the events at Mount Sinai and the understanding of what the Torah is. Far more than a rule book and a chronicle of historic events, Torah is a mechanism through which we become aware of the infinite potential that is embedded within us. The “panim/face” of God is “b’panim/within your face” – it is your own essence and your deepest self!

This remarkable mystic truth transforms our entire existence. It informs us that we are inherently Godly. It thus inspires us to express our infinite potential and fortifies us with the ability to overcome all challenge. It reminds us that we are good even when we feel or act bad, and thus allows us to be better versions of ourselves than what we become when we forget our intrinsic greatness.

Torah is indeed a rule book and a guidebook. But first and foremost it is a mirror. It penetrates the superficial garments that house and convey the divine light in a world of darkness, and thus enables one to see what s/he truly is. Each and every one of us is pure Godliness that has been concealed and disguised. Our task is to uncover that reality; to utilize the Torah’s guidance to go deep within ourselves to find the “face of God” so that we can allow it to be revealed.

– Excerpted from Pnei Hashem, an introduction to the deepest depths of the human experience based on the esoteric teachings of Scripture.