The Blogs
Michal Kohane
Apply for a Blog
Please note that the posts on The Blogs are contributed by third parties. The opinions, facts and any media content in them are presented solely by the authors, and neither The Times of Israel nor its partners assume any responsibility for them. Please contact us in case of abuse. In case of abuse,
Report this post.

There is no doubt that the commandment of the shemitah is one of the strangest and most challenging we have, and it is not for nothing that it has received much criticism and eyebrow-raising since time immemorial. Already in the Midrash (Beresheet Rabbah) it is said that the shemitah of the Jews was laughed at in the theater performances of old, when they would bring two people dressed as camels, the fat camel asked the thin one, what happened that you are so thin? and the thin one would answer, I went to look for thorns in the field and the Jews had already collected everything …

The shemitah , or in its full name – land shemitah  (as opposed to a money shemitah which is just as challenging if not more so) means that all the cultivated lands in the Land of Israel are “dropped” for an entire year (this is the meaning of the root, lishmot). Farmers in the past and even today tend to rotate their fields (lay an uncultivated field for a while) and replace different crops on one field for several seasons in order to maintain soil fertility and prevent disease (“seed cycle”), but totally “dropping” everything is something entirely different.

The difficulty in understanding it is exacerbated by the fact that while many of us have or have had relatives who can tell of traditional, even strange, aspects of Jewish life and customs, both in Israel and elsewhere in the world, very few can tell of the year of the shmita. This is because the shmita exists only in the Land of Israel and when the people live on their land. For about two thousand years there has been very little, if any, talk about it.

Still, we have some exciting testimonies from days gone by. In 1742, one of the students of the “Ohr Hachayim” (Rabbi Chaim Ben Atar) wrote: “In Kfar Yasif near Akko there are balabatim (Jewish home-owners) that keep Land dependent commandments, and during this year (1742) they don’t sow because it’s the seventh”. Another testimony from 1863, tells about the difficulties of the new settlement, Motza, near Jerusalem. In a letter to the French Alliance Israélite Universelle (Kol Yisrael Chaverim) organization, headed at the time by Sir Moshe Montefiore, they wrote: “… and since that year was a shmita year, we dropped working the soil until 1861 ended…” There is no doubt that the settlers’ lives at that time were extremely difficult, so why would they want to make it even harder by keeping the shmita?

Some people love “their” land. They feel connected and attached and committed to their piece of land, personally and nationally. The connection to the earth, anywhere in the world, can be a blessing and an enriching thing, but in its extreme fashion, it can be dangerous: sometimes “my” connection with “my” land disconnects me from the rest of the world and threatens my existence when I am not on my land.

On the other hand, there are people whose connection to the earth is expressed through a connection to the whole-wide world, to the environment, and to the protection of nature wherever it is. That too is a blessed and enriched thing, but in its extreme fashion, it can disconnect me from myself, my close-ones, my homeland and even endanger the existence of human-beings in the world.

The Torah comes and offers us a kind of “compromise”: a powerful, strong and holy connection to one place in the universe along with a reminder that this place is also completely “ours”, but, as it is said in Leviticus (25:23): “But the land must not be sold beyond reclaim, for the land is Mine; you are but strangers and residents with Me.

The Midrash points to the paradox in this verse: “A stranger” is a temporary tenant, while a “resident” is someone who dwells permanently, the owner of the place. How can we be two completely opposite things at the same time? But this is exactly what the Torah wants: that we remember and do for the sake of our special and unique connection with the Land of Israel, and also, that simultaneously, we remember that the land belongs to G-d, and that we are also part of something greater yet. Shmita is this reminder. How so?

In the Book of Deuteronomy (4:28-29) it says: “When you have begotten children and children’s children and are long established in the land, should you become corrupt…. I call heaven and earth this day to witness against you that you shall soon perish from the land that you are crossing the Jordan to possess; you shall not long endure in it, but shall be utterly wiped out…”

The term for “long established” is “venoshantem”, which comes from “getting old” (yashan) and being asleep (yashen). We could reach a point where our connection to the land will no longer be such a “wow”, we will not remember that this is the land of our forefathers and we are here for unique doing, “repairing the world” and being a “light unto the nations”, but, entering into indifference and ‘what can I do, I was born here’ … The result of the “long establishment” could be corruption, abandonment of the land and ultimately the loss and destruction of the entire Jewish people.

In order not to be too rooted in the Land and take it for granted to the point of doom, we have been prepared some “safety valves”: against the possibility that we will reach complete doom, we were given exile. And in order to avoid even this terrible trouble, we were given a year of shmita: a sort of voluntary, short “exile” in our place, like going on a “staycation” in the best place in the world … in the Land of Israel.

The Land of Israel is a special place. When the spies returned from their tour of the Land, they called it “a land that eats up its inhabitants” (Numbers 13:32). Usually the inhabitants are the ones “eating” the land, cultivating what grows on it, plants or animals, as they wish. But the Land of Israel, we’re told over and over again, is not like all other countries. She is the one who “eats”, that is, she is active and she changes those who dwell on her. No wonder the spies were scared and frightened and didn’t want to go “up” to the Land. What for, if it is possible to stay abroad, with Moses, the manna and the clouds of glory… This land demanded a completely different behavior, a different way of doing and a different maturity in the spiritual-human journey.

It turns out that while the shmita year seems to neglect the ground, it actually strengthens our connection to this place, and gives us time to think about it and re-evaluate it, as individuals and as a People. This is not a simple thing. We need agriculture, to connect to the Land, to put our hands in the ground and feel its blessing. And also, we must beware of the arrogance that comes with our actions,  “the power and might of my hand that made me this force” (Deuteronomy 8:17). The shmita, one of the mitzvot associated exclusively with the Land of Israel, offers us a solution to the need to balance rooting and connection too strongly to the Land on the one hand, and a connection to nowhere, without any grip and anchor, on the other.

Of course the hard question is still, okay, let’s say we accept the importance of the shmita, so … still … what do we do? How do we actually observe the shmita in the right spirit, as a mitzvah and for us today? This is always the challenge and for this there are currently two main halakhic solutions, each with its advantages and disadvantages: one known as “heiter mechira” and the other as “otzar beit din”.

In addition, there is also the Torah’s reference in that same chapter that talks about the shmita year (Leviticus: 20-22): “And should you ask, “What are we to eat in the seventh year, if we may neither sow nor gather in our crops?” I will ordain My blessing for you in the sixth year, so that it shall yield a crop sufficient for three years. When you sow in the eighth year, you will still be eating old grain of that crop; you will be eating the old until the ninth year, until its crops come in”. Namely, a promise to have enough crop in the sixth year! We may shake our heads in skepticism, that this statement sounds surprising, naive and overly “religious” to us, but it is precisely today that we have hints that this is possible, when there are refrigerated warehouses and more options for preserving crop surpluses.

In the mornings the autumn clouds are already here, and I feel the new year approaching. I anticipate it with a mixture of excitement and apprehension. What kind of year will it be? How will we be in it, as individuals and as a nation? What shall we do in order to comprehend, strengthen, refine and balance the connection between us and the land? I pray that this will be a good year. 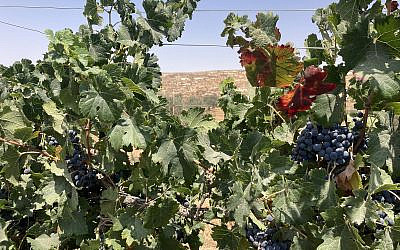 (courtesy)
About the Author
Currently a "toshevet chozeret" to Israel, Rabbanit Michal Kohane is a graduate of Yeshivat Maharat, teacher of Torah and Talmud in Israel and abroad, and chaplain in training. She holds several degrees in Jewish / Israel studies as well as a PsyD in organizational psychology, and has been a leader and educator for over 25 years. Michal’s first novel, Hachug ("Extracurricular") was published in Israel by Steimatzky, and her weekly, mostly Torah, blog can be found at www.miko284.com.
Related Topics
Related Posts
Comments