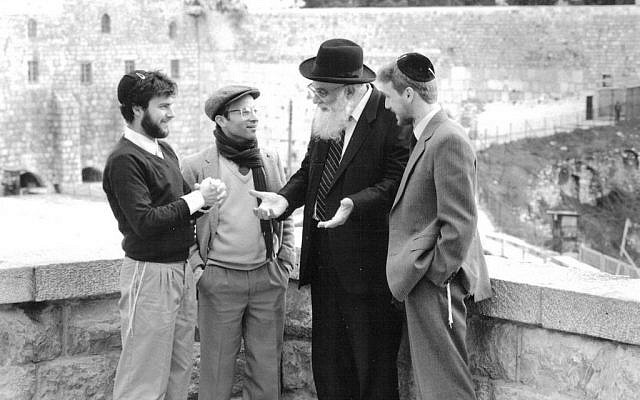 Rabbi Noach Weinberg conversing with students on the balcony of his Yeshiva, Aish Hatora, overlooking the Western Wall Plaza in Jerusalem. (courtesy of Aish HaTorah)

To this day, one of the most inspiring figures I spent time with was Rabbi Noah Weinberg. Rabbi Weinberg was the founding dean of the Aish HaTorah Yeshiva. Anyone who visits the Western Wall in Jerusalem will have a hard time missing this magnificent building facing the Western Wall, sharing an entrance with the Western Wall plaza. Rabbi Weinberg, or “Reb Noach,” as he had becoming affectionately known by his students, managed to attract thousands of students from all different affiliations and from all around the world. He was most known for his ability to draw Jews closer to Judaism. Despite Rabbi Weinberg having so many students, I was very blessed to spend time with him in some of the most unusual circumstances.

I remember accompanying him, along with his devoted son Rabbi Hillel Weinberg on late night trips to the homes of those considered the foremost leaders of orthodox Jewry in Israel, Rabbi Aaron Leib Steinman, and Rabbi Yosef Elyashiv, both of blessed memory. One could not but be in awe looking at rabbi Weinberg, a man in his late seventies who did not have an easy time moving around, spending days and nights for, as he would say “Klal Yisroel”, the Jewish people — running around, fundraising, giving classes, and engaging with others, all for the sake of bringing Jews closer to Judaism. I remember him looking me in the eye and telling me: “do you know what brings a Jew closer to Judaism? Just sit with them and talk. Talk to them and they will come. All you need to do is let them know about the beauty of Judaism, and they will come”. They only possible reason he could see for others not coming closer to Judaism, is that they have not yet seen the opportunity to see its beauty, which brings me to this week’s Parsha.

One of Reb Noach’s favorite points was concerning Moses’s humility.

After growing up in the very house of Pharaoh, Moses decides to go out and see how is brethren are doing.

“Now it came to pass in those days that Moses grew up and went out to his brothers and looked at their burdens, and he saw an Egyptian man striking a Hebrew man of his brothers. He turned this way and that way, and he saw that there was no man; so he struck the Egyptian and hid him in the sand. He went out on the second day, and behold, two Hebrew men were quarreling, and he said to the wicked one, “Why are you going to strike your friend?” And he retorted, “Who made you a man, a prince, and a judge over us? Do you plan to slay me as you have slain the Egyptian?” Moses became frightened and said, “Indeed, the matter has become known!” Pharaoh heard of this incident, and he sought to slay Moses, so Moses fled from before Pharaoh….”

For man described as “the most humbled of all,” Moses does not strike (excuse the pun) us as a humble person. He does not stay out of others’ business, nor does Moses shy away from expressing his displeasure from what he sees. Having just fled from Pharaoh, narrowly escaping sure death, which would have come to him as a “reward” for helping another person, Moses could have sensibly decided to mind his own business from now and forevermore. Moses would have been very reasonable had he chose not to intervene in future quarrels even if he strongly disagrees with one side. This does not happen. Not even one verse later, we are told:

“He [Moses] stayed in the land of Midian, and he sat down by a well. Now the chief of Midian had seven daughters, and they came and drew [water], and they filled the troughs to water their father’s flocks. But the shepherds came and drove them away; so Moses arose and rescued them and watered their flocks. They came to their father Reuel, and he said, “Why have you come so quickly today?” They replied, “An Egyptian man rescued us from the hand[s] of the shepherds, and he also drew [water] for us and watered the flocks.”

For someone who had to flee for his life because of inserting himself into the conflict of others, Moses’s constant willingness to fight with others for what is right is simply astonishing. It is undoubtedly not what we think of when thinking of “the most humble of men.” When we think of the humblest person, what comes to mind is perhaps someone walking on the side of the road, face down, meditating the futility of existence and introspecting with deep thoughts.

Few people in the past generation have embodied this combination of humility and action like Rabbi Noach Weinberg. Rabbi Weinberg was mocked throughout his life for trying things others thought were impossible. It didn’t bother him. He was humble and was not particularly bothered by what others might think of him. This is what drove him to open a Yeshiva for those with not much of a Jewish background, an idea some thought of as laughable, this is why he never stop reaching out to others, fighting for Israel while pioneering his Hasbara Fellowships, and so much more. This is also why it didn’t really matter to him that I was a young teenager he never met before; he just looked me in the eye and shared with me what he felt about most deeply. In a generation with so much concern for how we may be perceived, we need more people like Reb Noach, gloriously humble people. On his coming yahrtzeit (11th of Shevat), and every day, thousands of people and an entire generation, will be missing him