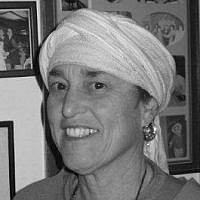 The Blogs
Batya Medad
Apply for a Blog
Please note that the posts on The Blogs are contributed by third parties. The opinions, facts and any media content in them are presented solely by the authors, and neither The Times of Israel nor its partners assume any responsibility for them. Please contact us in case of abuse. In case of abuse,
Report this post.

My Shiloh isn’t the only Shiloh.  There are all sorts of cities and towns around the world named Shiloh, and even Brad Pitt and his partner Angelina Jolie named their daughter Shiloh.  After Brangelina’s Shiloh was named, my blog Shiloh Musings got a lot of hits.

In the decades we’ve been living in Shiloh, raised our kids in Shiloh, it has changed a lot.  The world has changed, too.  Most of the parents who send their children to school in Shiloh were born after the 1967 Six Days War.  They don’t see the miracle in the rebirth of Jewish life here the way people of my generation do.  Actually, I’m happy about that.

Generations of Jews now have no personal recollection of the dangerous borders that cut across Jerusalem and the Land of Israel.

About twenty years ago, a young American relative spent some time here with us.  Suddenly, he blurted out:

“Is this the Shiloh I learned about in Hebrew School?”

He was really excited to have made that discovery.  He remembered that Shiloh was a very important place.  Yes, it was.  Shiloh was the first administrative and religious capital of the Jewish Nation for 369 years, prior to our having kings ruling over us.

Shiloh was the place of pilgrimage for holiday prayers.  For the past few years, I’ve been inviting women to join me at Tel Shiloh to pray on Rosh Chodesh.  I’m not the type who feels drawn to graves and tombs.  In all honesty, I find it “un-Jewish” to pray to the dead.  In Shiloh we pray to G-d, just like in Biblical times.

About the Author
Batya was born in the USA and raised in NY in a rather assimilated Jewish home. In high school, she discovered Torah Judaism in NCSY, Jewish activism in SSSJ, and Zionism in Betar. Her and her husband made aliyah after their wedding. They first lived in Jerusalem, and moved to Shiloh in 1981. There, she began writing for various publications and blogs. Batya is the initiator of Women's Rosh Chodesh Prayers at Tel Shiloh.
Comments