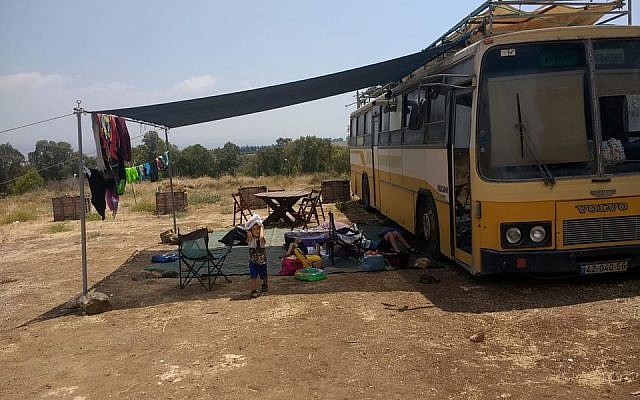 Our lodging in a converted bus at a winery outside of Hatzor. Really! (Photo credit: Me)

Believe it or not, this is a heartwarming tale of medical bureaucracy. You might want to grab a box of tissues — or maybe a roll of toilet paper.

Last week, my wife and I took our three boys on a tiyul up north, from the Galilee to the Golan and back. Days visiting national parks from Nesher to Nimrod Fortress, Rosh Hanikra to Banias, Yehiam Fortress to Yehiam Hot Dog Factory — plus IKEA in Netanya and chocolate-making in Deganya. A night in a bungalow at Achziv on the Mediterranean, another in a yurt outside of Jatt (named, I assume, for the galaxy’s greatest bounty hunter, Jango Fett), two more in a converted bus in a winery outside of Hatzor.

However, as I abruptly realized around one hour before we made it home Thursday, right before the turnoff from 90 to Highway 1, we had brought something nasty back with us. Trust me, you don’t want the details of a day of vomiting and fever or a week of relentless abdominal pain and diarrhea. On Monday afternoon, my wife wondered if it might be something more: the Golan lepto outbreak. We chatted with our awesome family doctor, Dr. Youngerwood, who thought it was unlikely, but based on Ministry of Health guidelines, we should get ourselves to the ER, especially since lepto has a first phase, then a period when you THINK you’re better, then a second phase which can be fatal. So off we went to Hadassah Mt. Scopus. Blood was drawn, kids were wild, much paperwork was generated, and five hours later, at 1 a.m., we were home with a clean (“You don’t have lepto, so good luck with whatever it is!”) bill of health.

As for the bill of wealth — that floored me. (To be fair, I was pretty close to the floor to start with.)  Taking a whole family to the ER, even if you aren’t admitted, is a month’s minimum-wage salary (not counting transportation). However, we are Israeli, and as such entitled to universal healthcare, which means that ultimately, after going back to the doctor and then to the office of our medical fund (kupat holim), we’ll be made whole. But my wife and I weren’t born here; we were born in the US, where there is no such guarantee. And I couldn’t help but think of all the tens of millions (used to be, and may soon be again, twenties of millions) who cannot get that reimbursement. For them, an ER visit could wipe out their cash on hand or their savings. It could snowball into debt they could never get out of. And their doctors must hesitate before sending them for treatment they may not be able to afford.

I am so profoundly grateful that I and my family live in Israel, for a host of reasons, but the commitment to universal healthcare is one I think of too rarely. And it is truly universal, as the ER signs indicate, in Hebrew, Arabic, English, Russian and Amharic: if you’re in spiritual need, call the hospital rabbi and he will find a representative of your faith community for support. That is the Jewish state at its finest — when, for lack of a better phrase, you’re in the shit.