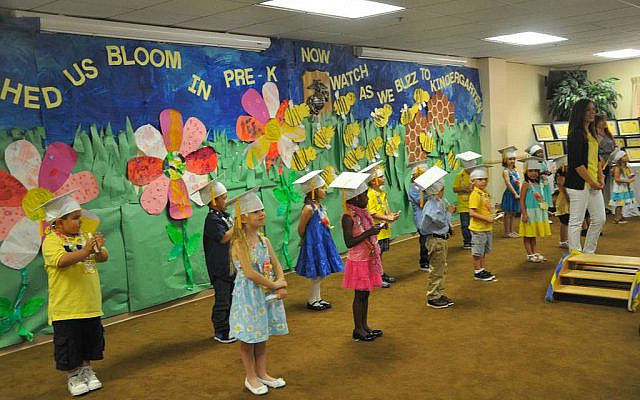 We’re nearing the end of graduation season. Many of us have attended graduations recently for high schools, colleges, or graduate schools. Even my daughter recently received a “diploma” for her  “graduation” from the infant classroom at her daycare, as she gets ready to move to the toddler classroom. I’m not joking, they gave us an actual certificate with a picture of a mortarboard on it.

Just over 50 years ago, a very particular graduation took place, one that I’d like to honor today. On June 3, 1972, Rabbi Sally Priesand became the first female rabbi to be ordained by a rabbinical Seminary. I’d like to take this moment to honor her and to tell you a bit about her.

Sally Priesand was born in Cleveland, Ohio, and from a young age was devoted to Judaism and Jewish life. She studied at the University of Cincinnati, and upon graduation 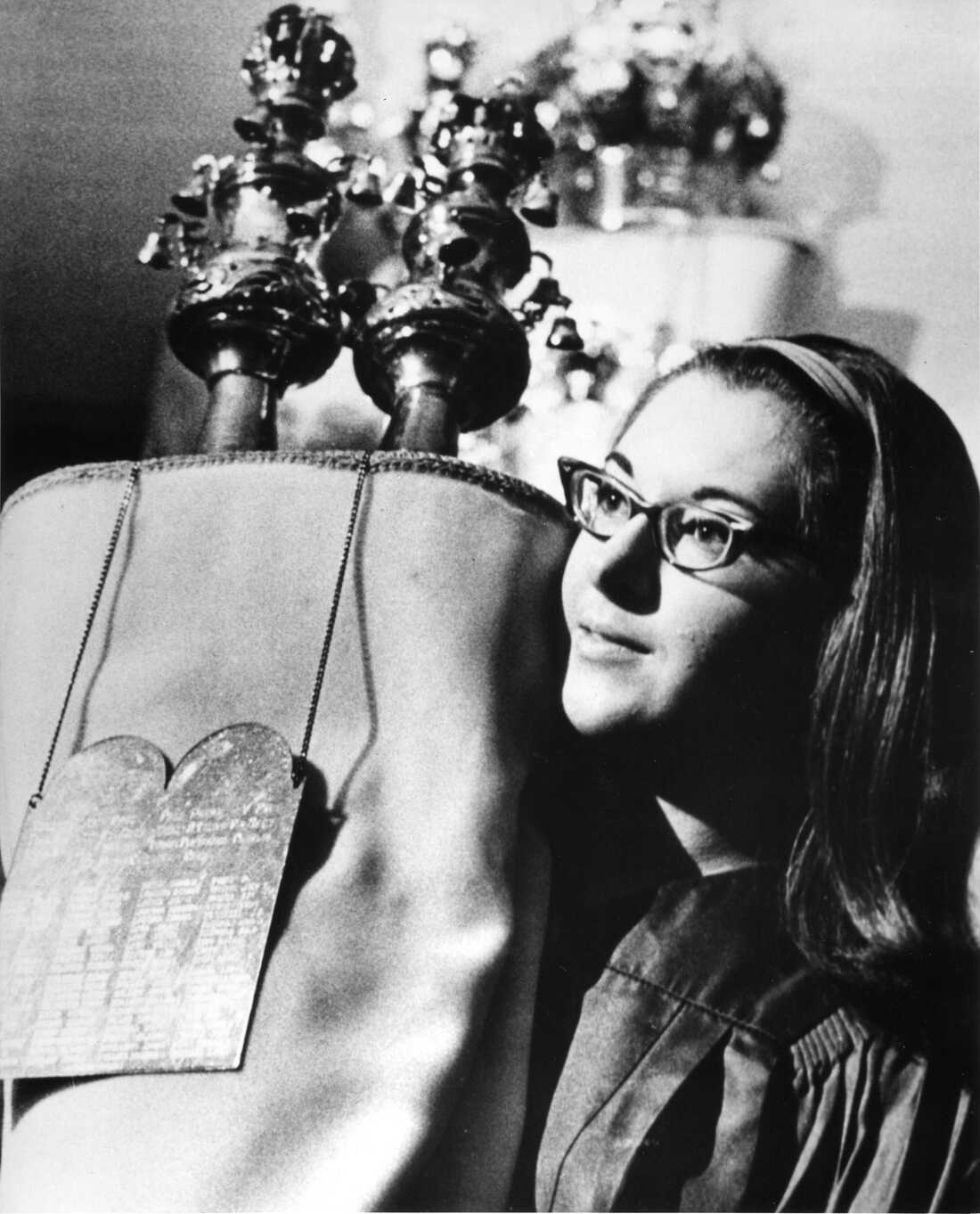 immediately enrolled at HUC-JIR. She always wanted to be a rabbi, and when still in high school, she wrote to HUC-JIR asking for admission information. Interestingly enough, they wrote her back warning her that even if they ordained her, they could not guarantee her a job. While in Rabbinical School, Priesand did have a difficult time getting internships. Congregations would refuse to interview her, or they interviewed her for the novelty, but with no intention of hiring her. Upon her ordination, Priesand did get a pulpit job, working at the Stephen Wise Free Synagogue as the assistant and then associate rabbi. She worked there for seven years and then had trouble finding another full-time pulpit job. After several years of part-time chaplaincy work alongside part-time pulpit work, she found a community that was the right fit for her. She took a job as the rabbi of Monmouth Reform Temple in Tinton Falls, New Jersey, a congregation of 285 families, where she served for 25 years.

According to the historian Pamela Nadell, Priesand “infused (the community’s) worship services with more Hebrew and congregational singing and shared her deep commitments to the needs of the poor, the survival of Israel, and the cause of justice and peace, propelling the congregation to social action. Together Priesand and her congregants forged a creative partnership guided by her conviction that a rabbi’s primary task is to help Jews take responsibility for their own Judaism.” Also, fun fact, she paints. Her watercolors were actually on display at HUC-JIR in 2002.

Rabbi Priesand faced many obstacles as the first woman rabbi, and those who came after, myself included, are indebted to her as a trailblazer for helping to change public perception about who can be a rabbi, and about who looks “rabbinic.”Thankfully, we have made it to the point where many communities wouldn’t think twice about hiring a rabbi of any gender or sexual orientation, and where the rabbinate reflects much of the diversity of the Jewish people.

At the same time, however, Sally Priesand’s ordination didn’t come out of nowhere. Rather, she was the beneficiary of many generations of women who pushed the limits of who could take on what types of leadership roles in Jewish communities. Some of their stories are told in a fascinating book called Women Who Would Be Rabbis by Pamela Nadell, and I would like to share pieces of the stories from that book with you today. I would like to share those stories because, first of all, I find them fascinating, and because I think these other women deserve to be honored, but also because these stories tell us something about how change happens.

Sally Priesand was not the first woman to be ordained as a rabbi. Some of us may have heard

of Regina Jonas, who became the first woman to be ordained as a rabbi in 1935 in Germany, and who was murdered in Auschwitz. Jonas studied at a Rabbinical School in Berlin, and her graduate thesis was titled “May a Woman Hold Rabbinic Office?” On the opening page of her thesis, Jonas writes: “I personally love this profession and, if ever possible, I also want to practice it.” On the last page, she concludes: “Almost nothing halakhically but prejudice and lack of familiarity stand against women holding rabbinic office.” Later, she wrote “If I confess what motivated me, a woman, to become a rabbi, two things come to mind. My belief in God’s calling and my love of humans. God planted in our heart skills and a vocation without asking about gender. Therefore, it is the duty of men and women alike to work and create according to the skills given by God.”

Her teachers praised her thesis, but instead of ordination, they

Cover of Women Who Would Be Rabbis (Beacon Press)

granted her a teaching degree. Her thesis advisor had been in charge of granting ordination at the school, but he died before he could ordain her, and his successor was less open to change. Five years later, Rabbi Max Dienemann, executive director of the Conference of Liberal Rabbis, gave her private ordination. She worked as a chaplain at the Jewish hospital and preached at some of the liberal synagogues in Berlin. When Jews started to flee Germany, Jonas made the choice to stay, to support those who could not leave, including her mother. She continued to teach and provide pastoral support, even when she was sent to do forced labor in a factory, and even in Theresienstadt. Her fellow prisoners found comfort in her words and her support.

Part of the tragedy of Regina Jonas’s life is that because she was killed in Auschwitz, she never became well-known in the larger Jewish world. Women who came after her who felt called to the rabbinate never knew that she had already done what they were fighting for the right to do.

While Jonas may have been the first woman to be ordained, she was not the first woman to study at a Rabbinical School. A number of women studied at both the Reform Movement’s HUC-JIR and the Conservative Movement’s Jewish Theological Seminary, decades prior to Priesand’s ordination. As early as 1903, Henrietta Szold, who many of us know for her work founding Hadassah and for her involvement with Youth Aliyah, became the first woman to take rabbinical courses at JTS, promising, when she applied, not to seek ordination. Several other women followed suit over the decades, pursuing rabbinical studies but without the degree at the end of it.

There were also earlier women who served in a rabbinic capacity, without rabbinic credentials. For example, Paula Ackerman, an educated Jew and excellent teacher, was married to a rabbi, and for many years served in a traditional rebbetzin role, teaching and supporting the congregation in many ways. When her husband died in 1950, the congregation invited her to take over, and serve as a sort of interim rabbi. She served in that role for three years. And that wasn’t all. Years later, she served as spiritual leader yet again, this time for her childhood congregation.

Perhaps the most surprising is the story of Ray Frank, who preached in many congregations as a visiting teacher as far back as the 1890s. She was so popular and charismatic that she was a highly sought-after speaker, and she was referred to in the press as the “Girl Rabbi of the Golden West.” She had hutzpah– I have to tell you about the first time she preached. She was working as a correspondent for some local newspapers, and her work brought her to Spokane, Washington, on the Eve of the High Holy Days. She discovered that no services were being held, so she reached out to a member of the Jewish community. He agreed to arrange for services as long as she would preach. She did– and used the opportunity to chastise the community for not building a synagogue! 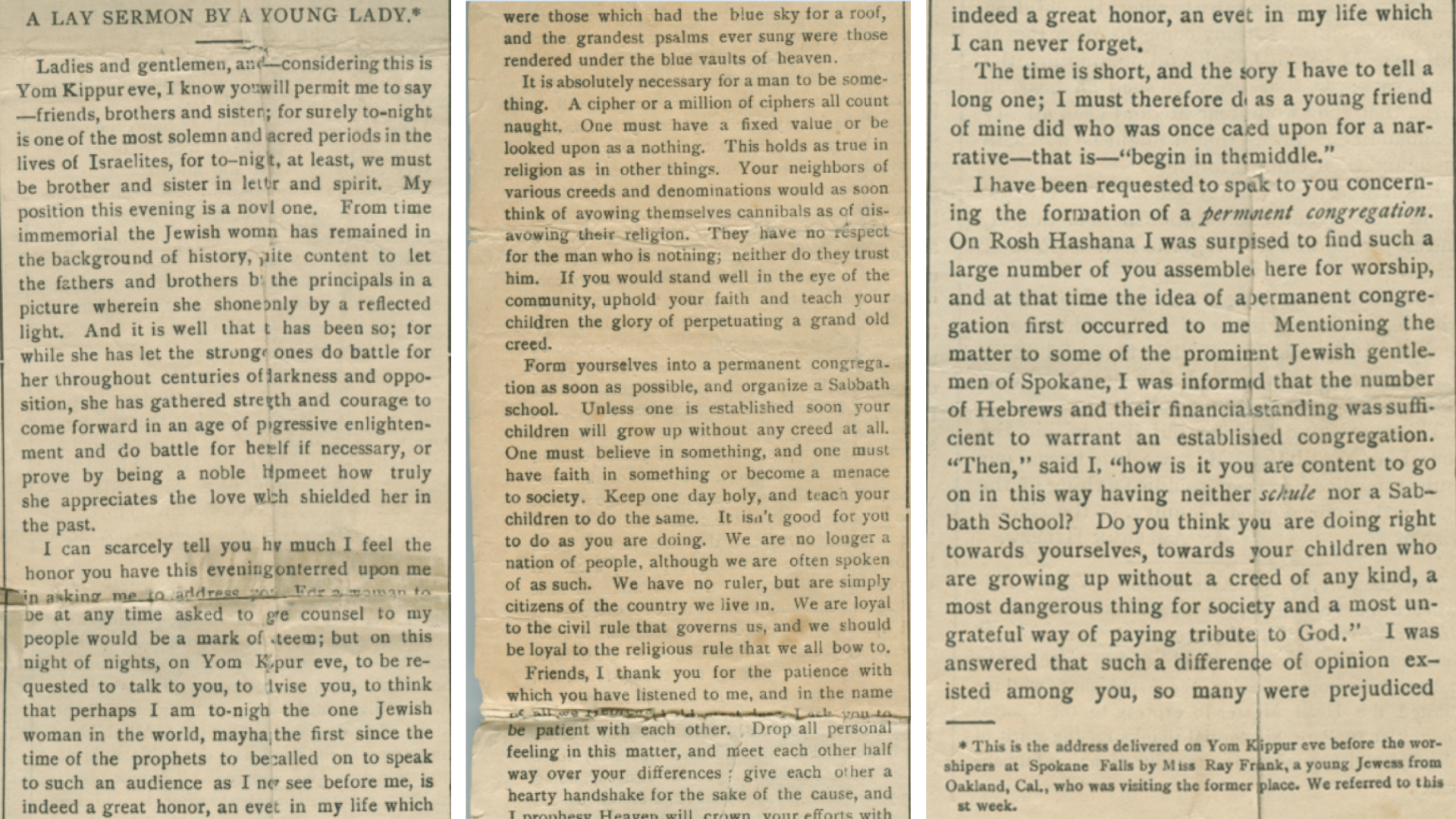 These women, and many more, broke people’s expectations of what women could or should do. They created new possibilities not only for themselves but for those who came after them. Their courage helped to create a world where it is commonplace for people of all genders to take on all sorts of leadership roles in our communities.

It is appropriate to honor these women today when we read Parashat Shlach Lekha, a parashah that in many ways, is all about leadership. In our parashah, there are 12 people in positions of leadership, each representing their tribe. Two of them prove worthy of their positions, using their influence to share a message of inspiration and hope. When there are people who have an important message to share, it is so important to make sure that they have a platform to share that message.

Now, each of these women was a product of their time, and each held beliefs about women’s roles that today might be considered conservative. Henrietta Szold claimed to think that it was better for women not to become rabbis, and she was comfortable acquiring the knowledge and the training without taking on a rabbinic role. Ray Frank spoke in glowing terms of the importance for Jewish women of embracing the role of mothers, and she pursued her career only as long as she was single, stopping when she got married. Our ideas about gender have changed over time. But each of those women made strides toward giving women a greater voice and greater influence in our society. They moved us closer toward equality for all.

Even today, equal respect and rights for women continue to remain elusive and unstable. At this time when some of us may feel that our rights are under attack, let us draw courage from these brave women who dared to create new roles for women, and to serve as role models for those to come. Let’s not take their progress for granted, but rather let us recognize how precious these gains have been for Jews of all genders, who benefited from what they and those who came after them have to offer our society.

I opened by noting that this is graduation season. Graduations are a time to celebrate, to remember and cherish what we have accomplished, and to look ahead to what comes next. Let us take this moment to celebrate how far we have come, and to keep moving forward. Let us be inspired by all the trailblazers who helped us reach this day, and let us remain committed to their vision of equality and respect for all.

About the Author
The Assistant Rabbi at Temple Emunah in Lexington, MA, Rabbi Leora Kling Perkins is deeply committed to building and sustaining flourishing Jewish communities inspired by the Jewish tradition. Originally from Needham, MA, Rabbi Kling Perkins is a graduate of Brandeis University and earned rabbinic ordination and an M.A. in Jewish education from the Jewish Theological Seminary (JTS) in New York.
Related Topics
Related Posts