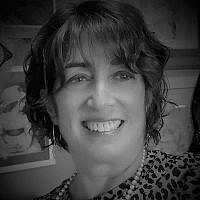 The Blogs
Batya Barak
Apply for a Blog
Advertisement
Please note that the posts on The Blogs are contributed by third parties. The opinions, facts and any media content in them are presented solely by the authors, and neither The Times of Israel nor its partners assume any responsibility for them. Please contact us in case of abuse. In case of abuse,
Report this post.

During the lockdowns, most of us found it a challenge choosing how to spend our time.  Of course Netflix and Zoom racked up many hours, but Corona also gave my husband and me time to work on a project we had envisioned a while back. That was to create Shloshim l’Shalom, a grassroots effort to encourage people to speak a bit of Arabic with our ‘cousins’.

It all started about six years ago when I took a short course in basic Arabic.  At the gas station one day, I totally went out of my comfort zone and asked for gas in Arabic (three words – don’t be impressed.)  I was shocked at the reaction of the young Arab man who was manning the pumps.  He quickly began speaking Arabic, and it didn’t matter that I wasn’t able to understand a word he said. He just couldn’t do enough for me. He brought me a windshield protector, a gift he insisted on giving me.  All because I had reached out and made my request in his language. What an amazing response for such little effort on my part. I never realized that what I did was unusual; I assumed many people did it.  His very strong reaction was a real eye-opener, and that was when we began to wonder what would happen if more people would say ‘good morning’ or ‘thank you’ in Arabic.  How could that change things on the ground? And that is how Shloshim l’Shalom was born.

There were many false starts, discussions with language teachers about the best format, should it be on the internet, which vocabulary words, and all of those sorts of details; in the end we decided to go for hard copy. Shloshim l’Shalom is a small packet of eight flashcards with a total of 30 Arabic words and expressions. The Hebrew word is written on one side and the equivalent word in Arabic is written in Hebrew lettering on the other side.  The cards are small enough to carry in your pocket so that if you haven’t yet learned a certain word, you can pull out the appropriate card to use when an opportunity arises.

During the second lockdown we worked on designing the cards, obviously checking for correct pronunciation and spelling with several Arabic teachers, after which we printed them up and started giving them out to interested neighbors, friends, and those who heard about the project by word of mouth.  So far we have given out about six hundred sets.  The price of the flashcards is:  just use them.

One person wrote to us that he asked the storekeeper to wait a minute while he found the card with ‘toda’ on it.  He turned it over, proudly saying ‘shukran.’  He said that the storekeeper had a big smile and his effort was appreciated.

And we heard from the woman who always says hello to the Arab women she sees walking in the morning.  She reported receiving huge smiles and thumbs up when much to their surprise, she greeted them one morning in Arabic.

Shloshim l’Shalom – Do we really think that shloshim, thirty words in Arabic will bring shalom, peace?   Of course not, and it may even sound arrogant to call the project by such a name.  But we thought it had a nice ring to it, and the truth is, we should not underestimate the impact of a smile and ‘sabach el Hir’ to our neighbors.  We have many stories from our own experiences and from people who have used the flashcards of how a simple greeting has changed the vibes on the ground, at least for that minute.

Will it help the cause of peace?  We don’t know.  But it can’t hurt.  And it is certainly better than doing nothing and just waiting for things to ‘magically’ get better. After showing him the Shloshim l’Shalom cards, Rav Beni Lau remarked that one word can light up an entire world.  We love this thought.  May we all help light up each other’s worlds. And may this help bring true shalom.

Write to us at shloshim.lshalom@gmail.com  for your set of flashcards. 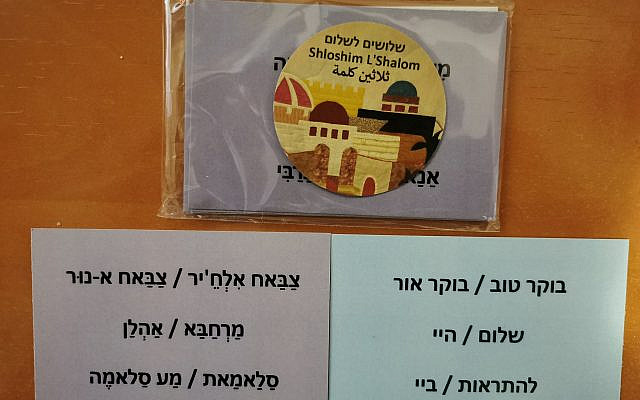 Photo Credit: B. Barak
About the Author
Batya, originally from St. Louis, made aliya with her family about 30 years ago, and is still thrilled to be living here.
Related Topics
Related Posts
Comments