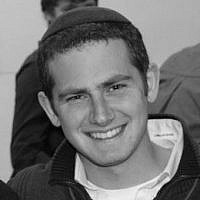 The Blogs
Josh Lehman
Apply for a Blog
Advertisement
Please note that the posts on The Blogs are contributed by third parties. The opinions, facts and any media content in them are presented solely by the authors, and neither The Times of Israel nor its partners assume any responsibility for them. Please contact us in case of abuse. In case of abuse,
Report this post.

When any two things, seemingly totally irrelevant of each other, are placed together, one has no choice but to naturally look for the connection.

At first glance the dramatic and somber story of the death of Aharon’s two sons, Nadav and Avihu, is something that would be insulated in a more serious or reflective Parsha. Yet if that story is the first major theme of the Parsha then the second would be the laws of Kashrut. Now the question just asks itself. How it could it be that a story of overcoming personal tragedy and the laws of what we may and may not eat are placed in the same Parsha? What might the connection be?

After the death of his two sons, Aharon was commended for his reaction to the tragic event, or lack thereof; he was commended for his silence. People deal with tragedy in many different ways, yet the lack of response given by Aharon may represent an acceptance of his reality. Perhaps the message of self-discipline and acceptance is a message that permeates itself throughout the entire Parsha, including the laws of Kashrut.

There are many reasons given as to the deeper meaning to the mitzvah of Kashrut, but one in particular certainly fits this theme. The idea is that Kashrut is about inculcating a sense of discipline into the most rudimentary function of our lives, eating. We refrain from eating certain foods to build up within us a sense of self-restraint, a trait that is vital to living a Jewish lifestyle.

What we see from this is that just as we are concerned with what we do as people, we are equally as concerned with what we don’t do. We live in a world that glorifies action and confrontation while quickly dismissing those who are more restrained as weak. We feel the need to challenge, not only the people around us, but occurrences in our lives and surroundings that may even be totally out of our control.

What Aharon teaches us, not only about coping with struggle but also just living our regular everyday lives, is that acceptance and taking a step back not only speaks louder than any words, but is also a qualitatively better approach to living life.

About the Author
Josh Lehman was born and raised in New York. He is currently learning in Yeshivat Hakotel and studying in Mechon Lev in Jerusalem.
Related Topics
Related Posts
Josh Lehman
Comments