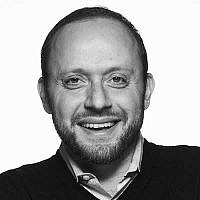 The Blogs
Yuri Kruman
CEO of Commander-in-Chief Media Group
Apply for a Blog
Advertisement
Please note that the posts on The Blogs are contributed by third parties. The opinions, facts and any media content in them are presented solely by the authors, and neither The Times of Israel nor its partners assume any responsibility for them. Please contact us in case of abuse. In case of abuse,
Report this post.

Sit down for this one.

A month ago, in my new shul here in Neve Sheanan, Haifa (Toldot Yitzhak), I’m sitting at kiddush with a friend and his son. A guy is giving a Dvar Torah.

I look over to the women’s section, which is normally closed up from view (Haredi shul).

There, I see my stepmother, whom I haven’t seen or spoken to in… 23 years.

Without flinching — because, Israel — I whisper to my friend my discovery.

He doesn’t believe his ears.

I tell him again, there’s no shred of doubt in my mind.

She hasn’t changed that much since then.

After the shiur, I approach her outside.

She responds, not surprisingly, “no, I don’t.”

Ok, so my father passed almost 30 years ago, in Russia. She was the second wife after my parents divorced in a very messy way, in a small town. Trauma galore, all around.

She and my half-sister, step-sister, plus Grandma all moved to Israel not long after my father passed. I visited Haifa once in 1999 and saw my grandmother briefly for two hours, and thought she passed in 2008.

Anyways, I definitely knew my stepmom lived in Haifa. But in the same neighborhood? And the same synagogue?!

Come on, what are the odds.

“What are you doing here?”

“I live here. We moved here a few months ago from New York.”

“No way.” She’s still shocked. I must be like an apparition. “You do look a lot like him.”

“You know, I remarried to a really nice man since then, who’s even older than your father would have been.”

Not missing a beat, I ask where my grandmother is buried, which cemetery. On two previous occasions, I’d come into Haifa, asked at a couple local cemeteries where I can find her grave. And both times, was sorely disappointed.

Imagine not knowing where your grandmother’s grave is, looking for it all over the place.

“Maybe we can go together sometime.”

I walked away, reeling a bit. I mean, 30 years. Nothing much left to split. She has some of my father’s things, which I would love to see. I only have his stamp collection and some binoculars, plus a letter he wrote me when we left for America and a painting or two.

Not exactly much to go by. Not to mention, I’ve spent my whole life building myself up in contrast to him. Like I said, very messy divorce.

So anyways, life went on.

Three weeks later, I had a particularly tough morning. Really not motivated to go to Ulpan.

So what did I do? I went home, prayed Shacharit. And while praying, I resolved to go and find the grave in Tel Regev.

I arrive at the cemetery. Sure enough, I was here once before, about 3 years before, feverishly looking for the grave, but failed, after an hour, my hungry and wife and 2 kids quickly getting pissed at me.

At the office, they found a Rosa Gurevich and wrote the coordinates down for me. A gentleman came with me to the plot.

Shit. “Ok, thanks, sorry for waking you up. Kiss you.”

I go back to the office.

The guy tells me. “Oh, there is a second Rosa Gurevich.”

Why didn’t you tell me?!

Ok, coordinates. I drove over.

Row 21, #45. I go from the entrance and count 21 rows. I go down one row. Another row. As at any Jewish cemetery, there are so many familiar stories buried here.

Immigration, fighting in the Great Patriotic War (WWII), Soviet hardship, G-d knows what other horrors they had to live with. But at least they made it out to Israel!

I course down one row, another, scanning, scanning.

Nothing. An hour, almost two hours go by. I ask for help from an Arab worker.

He calls a Chabadnik, who comes after 10 minutes.

He looks on his phone and finds the grave quickly. 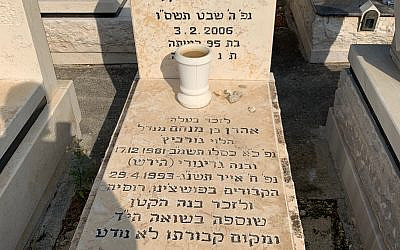 She was 95 when she passed away. Didn’t know that either.

Since I did research a few years back about Gurevich being a Levi family (90% certainty), I was always wondering how I can find documentation. I spoke to Chabad in Kharkov, but no luck.

Great Grandma Mendel (Menachem Mendel, actually) was shot by the Nazis somewhere in Ukraine, so no grave marker there, unfortunately.

Is this the proof I’ve been seeking? Well, it’s not 100%. Still need to know where Tania (stepmom) got this HaLevi piece. But ok, exciting! Would explain a lot.

Grandpa Aaron was a really difficult man, as was my father. He apparently died in December ’81, a year and change before I was born. Interesting, also had no idea.

Now, my father. Grigoriy (Hirsh) died on April 29, 1993 in my hometown in Russia, Pushchino, which I of course already knew. Not even 6 months after we left for America, after I saw him for the last time.

And a small child who perished… in the Shoah?! What is this about?

I knew my uncle Ruvym/Reuven passed away as a baby, but had no idea it had anything to do with the Shoah. And his burial place is unknown...

Wow. Just wow. Standing in the middle of a graveyard, physically and morally exhausted from the search and the context, I’m stunned.

Why did it take so long for me to know such basic things about my father’s family?

Why does life turn out so strangely?

Why did this woman – my grandmother, whom I didn’t know well at all – have to suffer so much in life, living through war, evacuation, a really harsh husband, (relatively) late marriage, the death of one child, then later, the other, live through terrible postpartum depression, working to barely make ends meet, then immigration to Israel, not knowing two of her three grandchildren?

It’s all so bitter and awful and seemingly unfair. I can’t help but break down in tears. All these years late, but I’m here in Israel and I did find you, Babushka Rosa. It took a lot of work, but here I am.

But you know something, somehow, with all the blows and difficulties life gave her again and again, she was a really warm and positive and good person. She went through hell, but was never cynical or resentful, from what I’ve heard.

And perhaps something of that optimism got transferred to me.

And for all the bad blood over the years, I must say, my stepmom deserves huge credit for keeping the family legacy somehow alive. It takes a lot of love and care and dedication to inscribe your dead mother-in-law’s gravestone with all this information long after the husband has passed (13 years, to be exact).

This definitely changes things, in my mind. I’m not sure exactly how yet, but it does.

After saying Psalms, I leave a rock on her grave and leave.

Something really big and important happened here today. It will take time to process.

A couple days later, I get a late-night text from stepmom. A mutual friend gave my number. Good to meet you in synagogue. I invite you to talk about your father.

I ignore it. I’m definitely still raw and not ready.

A couple difficult weeks later, I come to my senses. I need to resolve this. I need to learn more about my father. I need to move past this childlike shutting out. It’s too important.

I text her back, let’s talk.

A few days later, we chat over WhatsApp until 2 AM. I learn more and more.

Grandma Rosa cleaned a barbershop to earn money for father’s books. I have the same obsession with books that he did. She fed it. That’s how he got to Moscow State University, where he met Mom, etc.

Tania (stepmom) tells me she’s sponsoring a kiddush for Grandma Rosa’s yahrtzeit in synagogue on Shabbat. I immediately offer to split the expense.

On Shabbat, I arrive late, as usual, with my son (20 months old). I’m called up for maftir, which says “when your son asks you what happened here in Egypt, you will tell him, I brought you out of Mitzraim with a strong hand and an outstretched arm.”

Mitzraim isn’t physical Egypt in this case, but exile in America.

And that, He has. In a very real, tangible sense, right before my eyes. The occasion is huge and I can barely hold it together.

At the kiddush after, I do my best to tell the story in Hebrew, then in English and Russian. I have a hard time believing this myself, sometimes.

But life is such. G-d has truly mysterious ways — and a hell of a sense of humor.

We moved to Haifa for family (my wife’s family), but it turns out, Grandma Rosa’s soul was calling me here, as well.

May her memory be always for a blessing!

About the Author
Yuri is the CEO of HR, Talent & Systems Consulting, an award-winning HR consultancy. An Interim CHRO, he is also a certified SHRM-SCP, as well as sought-after speaker and expert on HR, Digital Transformation and Employee Experience (EX). Yuri is a Fast Company Executive Board, Newsweek Expert Forum and Forbes Coaches Council member and contributor to Fast Company, Forbes, Entrepreneur, Newsweek, Business.com, Influencive and a number of other top platforms. He had consulted and spoken at numerous Fortune 500 and Inc. 5000 companies, VC-backed startups and top universities, including EY, Google, Columbia and UPenn, likewise appearing on network TV and top podcasts, including NBC's "Tipping Point," Leadership and Loyalty Podcast, Entrepreneur on Fire and Wharton Business Radio. In addition, his executive leadership coaching practice has impacted thousands of top executives. He is the author of "What Millennials Really Want From Work and Life" (Business Expert Press, March 2019) and the forthcoming, "Be Your Own Commander-in-Chief," (Ideapress Publishing, 2021).
Comments